Over the years I’ve done a lot of barbecue… briskets, pork butts, poultry, corned beef, sausages and pastrami among others but I had never done bacon… that is until a short time ago. Making home-made bacon is not difficult but it does take some time to cure the pork before smoking. Once you’ve made your own bacon you’ll never buy expensive store-bought bacon again!

There are two ways to cure bacon: wet cured in a brining solution or dry cured with a rub. Bacon may also be cold smoked or hot smoked. Cold smoking is done between 52 and 90 degrees F. and takes a long time (up to a few days). Hot smoking is done at temperatures between 126 and 225 degrees F. for a shorter time, usually a few hours. For my first attempt at home-made bacon, I did a dry cure and hot smoke using pork bellies.

Here’s what to do for slab bacon (called streaky bacon outside of the U.S.)… 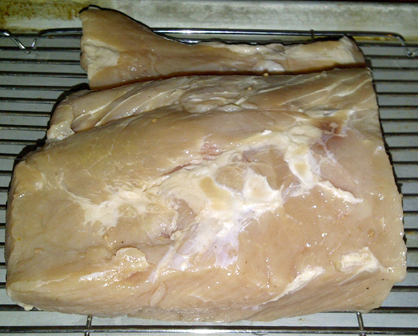 Find a butcher with pork bellies (a Chinese butcher probably has them on-hand; if not ask your butcher to order one for you). The ones I purchased from my purveyor had the rind (skin) removed and weighed about 11 pounds. I trimmed off some of the excess fat and cut the belly into four pieces about 2 3/4 pounds (or so) each. The trimmed pork fat makes great cracklings!

Then it was time to make up a basic maple cure (salt should be done by weight and not volume due to the difference in crystal sizes):

Mix the dry cure ingredients together in a bowl. When well combined stir in the maple syrup. Apply the rub liberally to both surfaces of the bellies. Individually wrap the bellies with food film or place in large food storage bags. Refrigerate the bellies for seven days, turning over every other day. After curing, remove the bellies from the refrigerator and rinse well under cold water. Pat them dry and place the bellies on a cooling rack over a rimmed cookie pan or half sheet pan. Season both sides liberally with your favorite pork rub (one that I use is Super Pig from Savor Spices because it is all natural and contains no corn, soy, wheat or gluten). Coat the bellies with the rub and return the bellies to the refrigerator on a cooling rack over a half sheet pan, uncovered, for one day to allow the meat to become firm and develop a sticky surface known as a pellicle. A pellicle is a slightly tacky, thin, lacquer-like layer that forms on the meat allowing for better smoke absorption. It also helps the meat retain moisture during cooking. 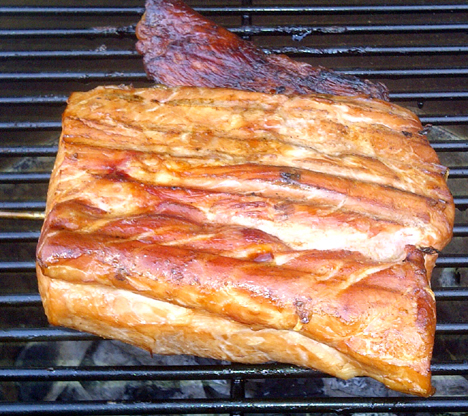 Prepare your smoker for a 225 degree F. cook using maple, apple and hickory wood. Smoke the bellies fat side up for 2 1/2 to three hours or to an internal temperature of 150 degrees F. turning them over halfway through the cook. To monitor the cook I use an iGrill Bluetooth-enabled thermometer that sends information to my iPhone or a Maverick ET-732 wireless thermometer.

I cooked the slabs on both a ceramic cooker using Basque hardwood and a Char-Broil infra-red gas cooker. If you use a gas-fired cooker such as the Heatwave, set it up for indirect cooking and rotate the slabs closer to the heat halfway through the cooking process when you turn the slabs over. On a gas cooker, I use a 12-inch A-Maze-N tube smoker filled with a mixture of BBQr’s Delight pellets. The tube smoker will generate smoke for about four hours using 3/4 pound (2 1/4 cups) of pellets.

Remove the bellies from the smoker and let them cool for at least 30 minutes before slicing. (Partially freezing the bellies will make for easier slicing.)

Pan-fry or oven-roast the cured bacon to the desired degree of doneness. In a 350 degrees F. conventional oven, it’s about 10 minutes per side. You don’t want to overcook the bacon. (Because of the maple cure, this bacon makes excellent “pig candy”.)

The cured and smoked bacon will keep, refrigerated, for one week or frozen for three months if it lasts that long before being eaten!

After having a pretty successful time cooking “American” bacon… I was bitten by the bacon bug so I thought I’d do the American version of Canadian bacon.

What is called “Canadian” bacon in the U.S. is not the same as the bacon made in Canada. North of the border, cured and smoked pork loin is rolled in fine cornmeal before frying and is called “peameal bacon” because it was originally rolled in crushed, dried peas before cooking.

Unlike bacon that comes from the pork belly, Canadian bacon (also called back bacon or Irish bacon) is made with trimmed pork loins or tenderloins. It is traditionally wet-cured by injecting the meat with a curing solution. In England this bacon includes the fat portion of the loin. 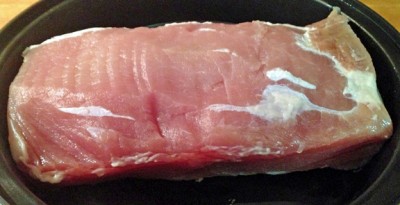 Remove any fat and silverskin from the loin. (The trim weight will be about two pounds.)

Using a kitchen syringe, inject the pork loin with the brining solution (you want to inject 10 to 15 percent of the raw weight with the brine solution so for this loin I used one half cup of brining solution). Place the injected loin in a large nonreactive container. Cover with the remaining brine and refrigerate at least five days or up to seven days, turning every day.

After brining, soak the loin in cold water for at least one hour, changing the water every 30 minutes. Pat the loin dry and refrigerate, uncovered on a cooling rack over a half sheet pan, for one or two days to allow a pellicle to form.

Remove the loin from the refrigerator and season liberally with your favorite pork rub or Cajun seasoning. My recommendation is 1/2 to one tablespoon of rub per pound. Bring the loin to room temperature. I tie the loin with butcher’s twine to form a cylindrical roll but it’s not really necessary. 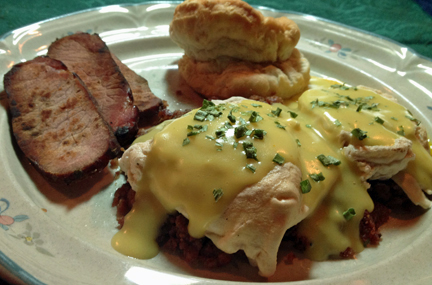 Prepare your smoker for cooking at 225 degrees F., using apple and sugar maple wood (or whatever wood you prefer; I would not use mesquite or a heavily flavored wood). Smoke the loin to an internal temperature of 150 degrees F. (about two hours or so depending on your smoker temperature). Remove the loin from the smoker and allow it to cool for at least 30 minutes before slicing.

After smoking, the loin weighed in at one pound seven ounces so if you’re going to the time consuming process of making your own bacon, it’s probably a good idea to do either a full loin or a half loin.

Pan-fry or oven-roast the slices to your desired degree of doneness (you don’t want to overcook the bacon). The sliced, uncooked bacon may also be frozen between sheets of waxed paper and wrapped with plastic wrap for up to six months.

My last bacon project was “Buckboard” or “Pioneer” bacon. This bacon is made from the pork shoulder (Boston Butt). Instead of making my own cure I used Hi Mountain’s Buckboard Bacon Cure from HawgeyesBBQ out of Ankeny, Iowa. The cure contains salt, brown sugar, granulated sugar, maple sugar and sodium nitrite. 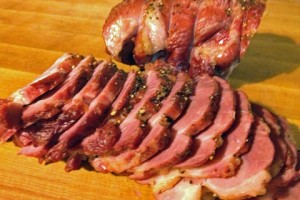 Use a very sharp boning knife and remove the T-shaped bone from the pork shoulder and any extraneous fat (or ask your butcher to do it for you). For this shoulder the trim weight came to about three pounds. Butterfly the shoulder to a three-inch thickness. Apply the cure on all the surfaces of the butterflied pork using 4 1/4 teaspoons per pound of trimmed meat.

If you’d prefer a home-made cure, try this recipe and combine the ingredients in a mixing bowl:

Place the meat in a non-reactive container or resealable food bag and cure the pork, refrigerated, for eight to 10 days turning the meat every day.

Roll the shoulder into a tight log and secure with butcher’s twine. Rub with coarsely ground black pepper.

Prepare the smoker for 225 degrees F. cooking with apple and hickory wood. Smoke the butt to an internal temperature of 150 degrees F., about three to four hours. Remove the butt from the smoker and let it cool to room temperature. Wrap the bacon with food film and refrigerate overnight.

Slice the bacon to the desired thickness (thinly sliced it will taste like bacon while thicker slices have a ham-like taste). Using a vacuum sealer or several layers of plastic wrap, package the bacon in serving sizes. The bacon will keep, refrigerated, for a week; frozen it will be good for three to four months.

Cooking the bacon is best done in a non-stick skillet over medium heat. Because it is very lean, Buckboard bacon will cook faster than traditional bacon.

This is a dry cure that can be used on about five pounds of pork bellies or fish such as salmon:

Combine all the ingredients in a small mixing bowl. This cure will keep, covered, for several months.

Bring the water to a boil over medium heat. Add the salt and sugar; stir until dissolved. Remove the brine from the heat and cool. Add the pink salt and stir to combine. Cool to brine to 40 degrees F.