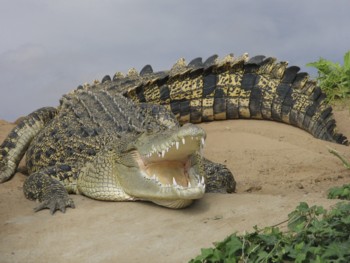 It’s funny that 100 years ago, these meats would hardly have qualified as “exotic,” but as beef, pork and chicken have come to dominate our diet, other, traditional meats have been forgotten. But over the past few years there’s been a surge in the popularity of meats like elk, wild boar, kangaroo and alligator. Although most of these animals are still hunted in the wild, many are now being farmed as well. Fine dining restaurants are suddenly showcasing elk tenderloins and wild boar chops; alligator sells like hotcakes at New Orleans street fairs; and kangaroo steaks have leapt off Australian menus and on to ours. We found one online retailer, exoticmeats.com, with a tantalizingly wide selection of wild game, and decided to explore.

These Boots Are Made For. . . Eating?

In her 2003 memoir, The Contented Poacher, Elantu B. Veovode wrote of spending an afternoon wrestling with alligators in a Louisiana bayou. After cooking up their catch, this poacher was decidedly discontent. “If somebody offered me a choice between alligator meat and a bit of pan-fried work boot,” she wrote, “then I’d have to have a good look at the feet of the fella who wore those boots last, as well as a few of the places he took them for a walk before I could make up my mind which of those two things, the alligator or the boot, I would be having for dinner.”

Veovode concedes that “alligator meat isn’t tough, if it’s cooked right,” but those are the kindest words she has for the swamp creature. Alligators have long been hunted, for hides and for meat, but in Louisiana hunters became so successful that the sight of an alligator became rare. Hunting was banned in 1963 and the animal was later listed as officially endangered. Because eating an endangered species is considered, well, impolite at best, alligator meat was off the table for almost 20 years. But then something funny happened–they came back. In droves. The problem with an excess of alligators is that they tend to crawl up out of the swamps and snatch a family pet–or family member–for a quick snack. And so in 1981, alligators were removed from the endangered species list. Today there are about two dozen alligator farms in this country, supplying plenty of alligator meat for Louisianans as well as the rest of us.

So what does it taste like? Well. . . it’s not like chicken, that’s for sure. People usually say alligator meat has a texture like veal but I think that comparison does veal a disservice. Alligator meat is firm textured, but it doesn’t shred like pork or flake like fish; in texture, and in flavor, it is probably most like frog’s legs. The tail meat is the most tender, and most commonly available. I like it best cut into cubes and deep fried or added into a gumbo or jambalaya. 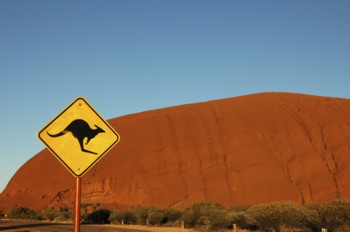 In Australia the kangaroo is as common as deer are in many parts of America. (And like deer, kangaroos are known to dart out in front of cars, often causing a surprising amount of damage.) These marsupials are beloved by Australians, who don’t see anything unusual about sitting down to a dinner of their national symbol. Then again, if Benjamin Franklin had had his way, and the turkey, not the eagle, was chosen as our national symbol, we’d be eating the picture on the back of the quarter every Thanksgiving.

Like deer, they are not extensively farmed, but culled in the wild, a practice that Australian settlers learned from Aboriginal Australians. Aborigines traditionally cooked kangaroo in a rock-lined pit, much like we barbecue enthusiasts cook a whole hog. But today you’re more likely to find kangaroo meat on the menu in upscale Australian restaurants. The meat is usually cut into steaks or made into sausages called “kanga bangas,” banger being slang for sausage. The meat is dark and red, not unlike beef, but with a slightly stronger flavor. It is very lean and a kangaroo steak can be quite tender when cooked medium rare or rare. 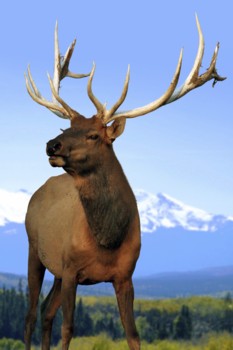 Especially in the West, elk has become very popular among two occasionally overlapping demographic groups: hunters and patrons of very expensive restaurants. In New Mexico, big game hunting permits are subject to a public drawing and lucky hunters whose names are drawn like to brag about their “tags.” Of course, getting an elk tag is a lot easier than actually taking down one of these elusive animals. Private game reserves, like the one on which Vice President Cheney bagged an elderly attorney, are not subject to the same rules.

Most elk in restaurants, however, comes from New Zealand, where elk is farmed extensively, and from a few American farms. Because the American elk is a species of deer, it tastes a lot like venison. (Elk is also closely related to moose, but I couldn’t tell you what moose tastes like.) Elk tenderloins and other steaks are what you’ll find in restaurants, but if you have a friend with a freezer full of white paper-wrapped elk, then you might become familiar with elk burgers, elk roast, elk meatloaf and elk stroganoff. Online sources also sell a wide variety of cuts. 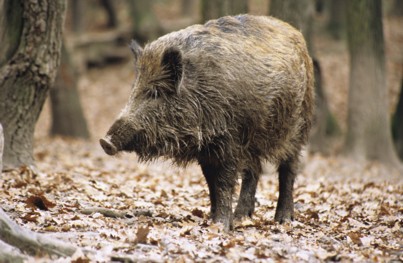 “Wild boar” is the highly unscientific term we use to refer to any kind of pig that doesn’t live on a farm. In fact, domesticated pigs that have escaped their farms very quickly become completely feral. What Arkansans call “razorbacks” are wild pigs that can be traced to animals brought here by the Spanish, and later, other Europeans. These escaped hogs eventually grew tusks and a thick coat of wiry hair. They’re smaller than their farm-raised counterparts, although not as small as the javelina, which is also called wild boar.

Native to the New World and only distantly related to pigs, javelinas are smaller, smellier and meaner than feral pigs. While some hunters may be fond of javelina meat, it is very rarely found in markets or in restaurants.

Wild boar meat (not javelina), which is also farm-raised in Texas and elsewhere, is leaner and more flavorful than pork. Wild boar chops, thickly sliced, can be even better than pork chops. We tried the wild boar bacon, which is lean, meaty and extra smoky. It comes unsliced so you can use chunks of it for adding to soups or just slice it extra thick for your BLT’s. 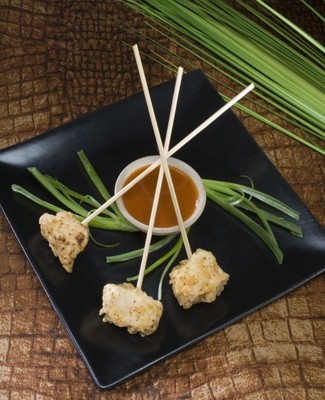 Dip these nuggets in hot sauce or use them as croutons on a Cajun-style Caesar salad.

Pour vegetable oil into a heavy cast-iron skillet or Dutch oven, to a depth of about 2 inches. Over medium heat, bring the oil to 375 degrees F.

In a bowl, beat the eggs together with the lemon juice. Add the alligator to the egg mixture and toss to combine. Sprinkle the meat liberally with salt and pepper (or chile powder, if desired).

Add the meat to the oil and fry the nuggets until golden brown. Drain them on a paper towel-lined plate and serve immediately. Repeat with the remaining meat and flour.

Cook these meat kabobs separately from vegetables; vegetables should be cooked for a longer time at a lower heat. You can use some of the orange chile marinade for the vegetables as well; divide it before you pour marinade over the meat. Note: This recipe requires advance preparation.

Put the cubed meat in a large resealable plastic container or zippered storage bag. Sprinkle salt and pepper over the meat. Add the other ingredients and shake vigorously until the mixture is combined and the meat is coated. Refrigerate 4 hours or overnight.

Heat a charcoal or gas grill to high.

Thread the meat cubes onto long metal skewers. Grill over high heat, turning at least once, until the meat is cooked no more than medium rare. Remove the meat from the grill and allow it to rest at least 5 minutes before serving.

If you want to use the marinade as a sauce, pour the remaining liquid into a blender and puree completely. Then heat the sauce to a boil in a saucepan. Simmer 5 minutes and pour over the kabobs. 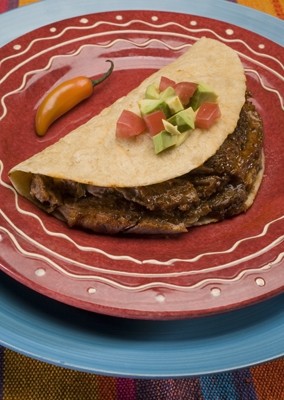 You can cook elk roasts quick and dry, like a beef tenderloin, or slow and moist, like a brisket. This recipe uses the slow and moist method with a spice rub that includes all the flavors of a Mexican Mole. Serve it with plenty of Negro Modelo beer. Note: This recipe requires advance preparation.

For the mole rub:

In a large bowl, whisk together all the ingredients of the spice rub. Sprinkle the meat with salt and pepper, then add it to the bowl, coating it with the rub. Cover the bowl tightly with plastic wrap and refrigerate overnight.

Remove the meat from the refrigerator and allow it to come to room temperature.

Preheat the oven to 450 degrees F.

Put the meat on a rack in a shallow baking dish. Cook at 450 for 20 minutes, or until the roast is browned. Add the beer to the baking pan and reduce the heat to 200 degrees F. Cook 2 1/2 hours to 3 hours, basting frequently, or until the meat is falling-apart tender.  Serve wrapped in a flour tortilla.
Yield: 6 servings
Heat Scale: Medium

Jambalaya is the kind of dish that can feed a big crowd. It takes a long time to cook, but it seems to get eaten pretty fast! Normally made with some combination of shrimp, chicken and andouille sausage, this recipe takes on an exotic twist with smoky wild boar bacon, chunks of alligator tail meat and kangaroo sausage.

Add the bacon, alligator and sausage, then stir in the rice and the rest of the chicken stock. Cover and cook for about 25 minutes, until the rice is cooked through.

Adjust the seasonings and serve hot.

For more information, and to buy these meats online, to to www.exoticmeats.com.           top of page