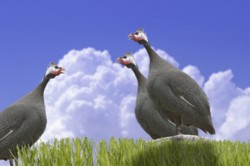 It all tastes like chicken! That’s a common response when someone asks what “exotic” poultry tastes like. The truth is that Guinea fowl, pheasant, quail and especially ostrich don’t taste like chicken, at least not a lot like chicken.

When Dave DeWitt asked me to prepare “exotic” poultry I was a little concerned. Now I’ve cooked–and eaten–some very strange foods in my years as a chef but my familiarity with specialty meats was limited. So I turned to the Internet and found ExoticMeats.com, a purveyor of a wide variety of specialty meats from Wyoming buffalo briskets to whole Texas wild boar and most everything in between, including llama, Colorado yak, Australian kangaroo and Alaskan caribou. Their poultry offerings are equally diverse, including ostrich from Australia, partridge from Scotland, Canadian pheasant, wild turkey from Canada, Guinea fowl and California poussin and squab.

Located in Bellevue, Washington, Exotic Meats opened in 1992 supplying area restaurants and retailers. The company went online in 1997 and is now the largest Internet provider of specialty meats, poultry and seafood. They were kind enough to send me samples for this article.

“There are those adventurous souls who buy our products looking to experiment,” says David Pedersen, ExoticMeats.com operations manager. “To help them, we offer recipes on our Web site; we also include recipes with every order. For the not so adventurous who have never been exposed to non-traditional meats, it often requires an introduction by a friend or a restaurant before they become interested.”

While cutting edge chefs have offered specialty meats on their menus for years and game dinners are popular throughout the country, very few home cooks take the opportunity to experiment with non-traditional meats and poultry–unless they’re hunters. But that’s changing. According to ExoticMeats.com, the nationwide specialty market has expanded from annual sales of $110 million to $340 million. Industry experts note a 20 to 30 percent annual growth.

“A lot of first-time exotic meat eaters buy meats to serve for special occasions,” Pedersen notes. “There are also a large number of people who enjoyed game meats while traveling abroad and are looking to be able to enjoy these meats once they get home.”

Given the cost of “exotic” poultry (and the charge for second-day shipping), enjoying diverse entrees such as the ones I had the opportunity to sample is probably not something you’ll do regularly. Instead, save your exotic poultry for special occasions and make them truly memorable. Exoticmeats.com is in the process of opening a distribution center and retail store in Texas, which will significantly reduce shipping costs to customers in the Midwest and East Coast.

The following recipes are relatively uncomplicated to prepare yet they highlight the delicate flavors of the non-traditional poultry. 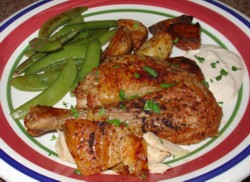 Many folks assume Guinea fowl is a British game bird but in fact it is of West African origin. Although it may not be common in this country, throughout Europe it is commonly served for Sunday dinner. A member of the pheasant family, Guinea fowl has chewy and moist white and dark meat, with especially flavorful dark meat. Nothing could be simpler than preparing Guinea fowl: just substitute Guinea fowl for chicken in any recipe. Serve this dish with sauteed sugar snap peas and oven-roasted Red Bliss potatoes.
1 (3-pound) Guinea fowl
1 tablespoon olive oil
1 tablespoon unsalted butter
1/3 pound morel or porcini mushrooms, chopped
3/4 cup hard cider (such as Vermont Cider Jack)
1 1/2 cups Guinea fowl or chicken stock
1 cup heavy cream
2 teaspoons whole black peppercorns
1 tablespoon minced flat-leaf parsley
Coarse kosher salt

Butterfly the bird by removing the backbone and partially splitting the breast bone. Lightly rub the meat with olive oil and season with salt and pepper. Place the bird on a rack set in a baking pan and roast for 1 hour or until the thigh meat reaches an internal temperature of 175 degrees F. Remove from the oven, tent with aluminum foil, and allow to rest for 5 minutes.

Meanwhile, add the olive oil and butter to a medium saute pan over medium heat. When the butter is melted, add the mushrooms and cook 1 minute. Add the cider and bring to a boil. Continue cooking until the cider is reduced by half, about 8 minutes. Add the stock and continue simmering another 10 to 12 minutes. Roughly crush the black peppercorns and add them to the pan. Add the cream and return to a boil. Reduce the heat and simmer until the sauce starts to thicken, about 5 to 7 minutes. Add the parsley and season with salt.

Remove the breasts from the fowl and slice crosswise into 1/4-inch-thick strips. Serve the breast slices with a leg portion and drizzle them all with the mushroom-cream sauce. 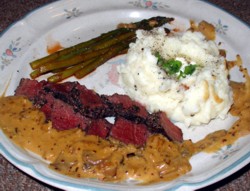 Surprisingly, ostriches give red meat that is more like beef than chicken. But it contains little fat and cooks more quickly than a similar size piece of beef. Very tender when cooked properly, ostrich can be used in any red meat recipe. The meat from the ostrich comes from the thigh, leg and back. Ostrich filets and sirloin come from the thigh. Because ostrich is so lean, it’s best cooked rare (145 degrees F.) to medium (155 degrees F.) otherwise it will become dry. This recipe requires advanced preparation for marinating.

Preheat the oven to 425 degrees F.

Transfer the skillet to the oven and cook for 5 minutes, or to an internal temperature of 145 to 155 degrees F. Remove the ostrich from the oven, scrape off the excess peppercorns and let the medallions rest briefly before serving. 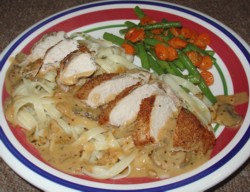 Introduced to America in the 1880s from Asia, pheasant has a gamey poultry flavor with a meatier, slightly drier texture than domestic fowl. Although wild pheasant benefits from brining to keep it moist and reduce the gamey flavor, farm-raised pheasant has a milder taste with a hint of apple. Smoking with apple wood accents the apple highlights of the pheasant. Barding the breasts will keep them moist during cooking. This recipe requires advanced preparation.

For the spice rub:

Butterfly the pheasant, reserving the backbone and giblets for stock, if desired. Cut off the wing tips and discard.

Combine the rub ingredients in a small bowl, then sprinkle the mixture over both sides of the pheasant. Cover the meat with plastic wrap and refrigerate for 12 to 24 hours. Remove the pheasant from the refrigerator and let stand at room temperature for 30 minutes.

Prepare a smoker or grill for 225 degree F. smoking. When the temperature stabilizes, add 1 1/2 cups of drained wood chips to the coals and place the pheasant on the cooking grate, skin side up, and lay the bacon strips atop the breasts. Smoke the pheasant for 2 to 3 hours or to an internal temperature of 165 degrees F. adding more drained wood chips and preheated coals as needed. Transfer the smoked pheasant to a cutting board and tent with aluminum foil while preparing the pasta. (If you prefer, you can roast the pheasant at 375 degrees F. for about 45 minutes.)

Cook the fettuccini according to package directions and drain. Return to the stockpot and add 2 tablespoons of butter. Stir until the better melts.

While the pasta is cooking, remove the breasts from the bird and slice them; remove the leg and thigh sections and divide into 2 pieces.

Divide the fettuccini onto 2 warmed serving platter and arrange the pheasant atop the pasta; pour the Mushroom Cream Sauce on top. Garnish with chopped parsley.

Heat the butter and oil in a small skillet over medium heat. When bubbling, add the shallots and saute for 2 to 3 minutes. Add sliced mushrooms and saute until golden brown, about 8 minutes. Add the brandy and boil for 2 to 3 minutes to cook off the alcohol. (If using a gas range, remove the pan from the stovetop before adding the brandy.) Add the half-and-half and stock. Reduce heat and cook until reduced to a thick sauce. Season with salt and pepper. 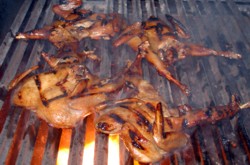 American quail has dark meat but a mild, sweet taste and only a hint of game. As quail are very small, plan on at least two quails for an entree-size serving or one as an appetizer. As with any poultry, use an instant-read thermometer to be sure the quail is properly cooked. The quail could also be cooked in a cast iron grill pan over medium heat. Serve with wild rice pilaf and crispy bacon green beans. This recipe requires advance preparation.

4 or 5 cloves garlic, minced (about 3 tablespoons)

Use kitchen pliers or tweezers to remove any pin feathers remaining on the quail.

Prepare the marinade by combining all of the ingredients in a mixing bowl. Whisk well to combine. Place the quail in a zippered storage bag and add the marinade. Marinate, refrigerated, at least 4 hours or up to 24 hours.

Prepare a grill for medium-high direct cooking. Place the quail on the grill, skin side down, and cook for 3 minutes. Rotate the quail 90 degrees and grill another 3 minutes. Turn the quail over, brush with Maple-Ancho Chile Glaze and continue cooking another 6 to 8 minutes or until the quail has an internal temperature of 145 degrees F.

This glaze is also great with chicken wings, lamb shanks, pork chops or even grilled beef steaks. If you can find it, Grade B maple syrup will produce a stronger maple flavor that Grade A syrup.

Combine the ingredients in a small mixing bowl.

Editor’s note: Mike Stines, Ph.B. is the author of Mastering Barbecue (Ten Speed Press, 2005) and a professional culinary demonstration chef. He recently released “Mike’s Gourmet E-Meals” a CD that is available at GourmetEmeals.com. top of page