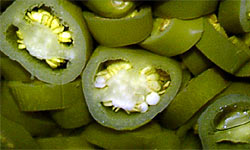 Editor’s Note:   Photo above by Harald Zoschke.  Photos below by Gwyneth. –Dave DeWitt

On the Saturday before Labor Day I drove out to Sky City Casino at Acoma Pueblo for the 2006 World Championship Jalapeño Competition, an event attended by about 100 people, but nevertheless officially sanctioned by the International Federation of Competitive Eating (IFOCE). It was the most awe-inspiring, uvula-tickling, gut-churning spectacle I have ever witnessed in what I must say is a long personal history of watching people eat. There were moments when I could only peek through cracks in the fingers I had clenched over my eyes, and there were moments when my lunch only stayed down because of the fingers clenched over my mouth.

Fewer than half of the competitors were New Mexicans, including a woman from Acoma Pueblo and a dealer from the casino; the rest were “pros,” regular competitive eaters who had honed their gut-stuffing skills over years of IFOCE competitions like the annual Nathan’s Famous Fourth of July Hot Dog Eating Contest at Coney Island. 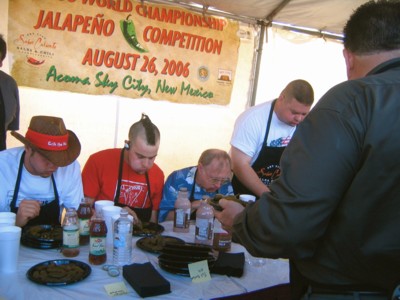 The Contestants Dig In

According to Matt Rizzetta of the IFOCE, searingly hot and outrageously acidic pickled Jalapeños present one of the most difficult challenges in competitive eating. “Jalapeño is one of the most prestigious competitions,” Rizzetta says, explaining why so many pros showed up at Acoma Pueblo. “There are a few things that pros take into consideration when choosing a contest, one is location and the other is prestige.”

Shortly after 4 p.m., wearing official Sky City Sabor Caliente aprons, pros and locals all gathered in the casino parking lot, lined up behind a long row of folding tables and armed with nothing more than their appetites. As the crowd counted down from 10, these so-called “gurgitators” sized up the plates of pickled Jalapeños laid out before them. Friends and family yelled encouragements to some of the local hopefuls, who looked alternately nervous and gigglingly game. The pros had their game faces on. They were focused, intense, pale and sweaty.

Once the contest had commenced it became clear what separated the amateurs from the pros. The amateurs were actually eating the Jalapeños, taking bites and chewing thoroughly, while the pros just inhaled. They stuffed and stuffed and stuffed their faces full like chipmunks, pausing only to wash down the chile mash with their chosen beverages: water, Gatorade, iced tea, Diet Coke andâ€¦chocolate milk.

The chocolate milk was chugged by mohawked 20-year-old Pat Bertoletti, a relative newcomer to the sport who had never competed with Jalapeños before, but who does hold records in Key lime pie (almost 11 pounds of pie in 8 minutes) and corned beef and cabbage (nearly 6 pounds in 10 minutes). The fourth-ranked competitive eater in the world, Bertoletti was a favorite to win at Acoma.

After a few minutes, all of the eaters started to show signs of wear. They began to take deep breaths. A few decided to stand, rather than sit, perhaps to allow for more expansion in their bellies. Their faces took on pained looks. Bertoletti, who rocked out with his iPod on throughout the contest, looked only slightly bothered, as though he couldn’t quite decide whether to have Cherry Garcia or Chunky Monkey for dessert later.

Halfway through the contest it got pretty rough. Sweat ran down the chile-eaters’ brows and dripped into their eyes, mingled their with tears and spilled onto their cheeks before joining the flow of snot running from their noses right into their mouths. Suddenly, Erik the Red, a 20-something professional eater from Seattle, stood up. His eyes were pressed tightly shut and beads of perspiration making his skin glisten like the sides of a soda can on a hot day. His cheeks were packed full, stretched taut like two water balloons about to burst and as he clasped his hand over his mouth, so did I. The juice of dozens of pickled Jalapeños began to seep from the cracks between his fingers. “Noooooooo!” the crowd yelled. 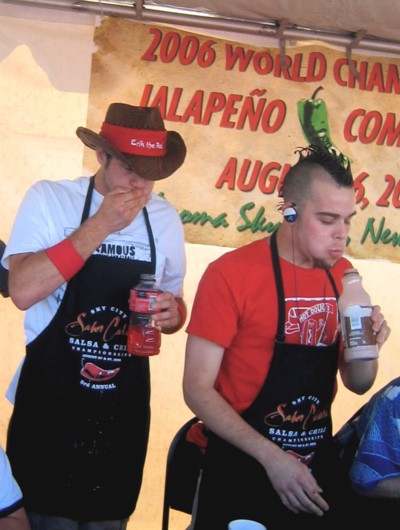 Erik the Red holds back a “reversal of fortune”
while Pat Bertoletti washes down a mouthful
of Jalapeños with chocolate milk.

Carlene LeFevre, the wife of Jalapeño competitor Rich “The Locust” LeFevre, shouted words of encouragement to Erik, along with Pat and her husband. Carlene is a competetive eater herself, having won Sky City’s posole eating contest in 2004 (she put down 109.75 ounces in 12 minutes). Rich, a 60-year-old retired CPA, had his face level with his plate and was using both hands to cram Jalapeños in his mouth. Ranked 8th in the world, “The Locust” holds records for SPAM (6 pounds in 12 minutes), birthday cake (5 pounds in 11 minutes 26 seconds), and huevos rancheros (nearly 8 pounds in 10 minutes).

As LeFevre feverishly shoveled, Erik The Red’s crisis seemed to pass. He had narrowly avoiding what the IFOCE affectionately terms a “reversal of fortune.” As the 15 minute mark drew near, several contestants came dangerously close to reversal.

When time was up, it was too close to call between Bertoletti and LeFevre. The contestants all lingered, looking pained and ill as they wiped their faces and awaited the results. When “Jalapeño” Jed Donahue darted away from the table, we weren’t sure where he was going–until we all heard a really, really loud splash hitting asphalt. The crowd collectively groaned, and when Donahue returned to the table there was some confusion about whether or not he would be disqualified.

In the end it was determined that Pat Bertoletti had put down 177 pickled jalapeños, a feat rewarded with the $1,000 grand prize. Rich LeFevre came in second, having shoveled in a total of 155. Even though he chucked much of what he’d eaten, “Jalapeño” Jed still won third prize for eating 144. Erik The Red, who did manage to keep it all in, took fourth after eating 107, and “Buffalo” Jim Reeves took home fifth place and $150 for eating 74 pickled Jalapeños in 15 minutes.