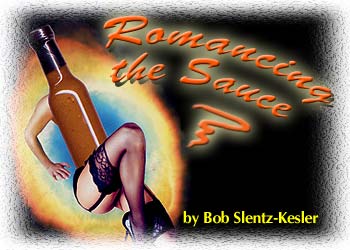 I am a hot sauce addict. I can never get enough. I’ll eat hot sauce anywhere, at any time of the day. I am easy, and I can’t help it. I spend many daylight hours fantasizing and daydreaming, imagining various scenarios with different types of hot sauce. Over the years, though, I’ve learned to control myself. It was much worse in the early days.

I used to prance through the aisles of Fowler’s Gourmet in Durham, North Carolina, clapping my hands wide-eyed at such juicy titles as Pyromania Hot Sauce, Pain 100%, and 99% Meltdown Habanero Paste. Fowler’s has such a fabulous selection: Scorned Woman, Ass in Space, Nuclear Hell, Sudden Death Sauce. And who, in his right mind, wouldn’t be intrigued by Smack My Ass & Call Me Sally? Spicy!

Ever since I was a kid, I’ve had a complicated relationship with hot sauce. My family never talked about it in the house. My parents taught me nothing about hot sauce, about what a big step it was to eat hot sauce, about the responsibility and the potential risks. I was left on my own to explore, to fantasize, to fill in the gaps with my own imagination.

I had my first experience in high school. It wasn’t meaningful. I wish I hadn’t rushed, that I’d waited until I was ready. But I was young and eager, so I really can’t blame myself. The first time, it happened very quickly. We were all eating lunch in the cafeteria at Loudoun County High School in Leesburg, Virginia, and the new kid from Texas pulled a bottle out of his lunch box. He pulled it out, right there in front of everyone! I couldn’t believe it. The boys at the table saw it, but no one asked him any questions. We knew what it was, and we didn’t care where he’d gotten it.

“At first it was sweet. It teased me, as if to make
me want more—as if to make me believe it would
never hurt me. And then the truth came out.”

The label had been removed, and we could see the liquid from all angles, layers of red, from deep crimson at the bottom to yellowy plasma-looking fluid at the top. And sprinkled throughout were flat, yellow seeds.

Damn. This wasn’t the sort of thing I wanted publicized, and he knew it. The other boys nodded solemnly, and the jerk from Texas locked his eyes on me as he shook the bottle and then slowly unscrewed it.

God, NO, my brain was shrieking, but I was too cool. I knew I had to do this. I held out my nacho cheese Dorito, and the jerk from Texas dribbled a few drops on the edge (oh, he wouldn’t let anyone touch his bottle). He doled out the portions himself.

I held the Dorito in front of me and opened my mouth to receive the chip. But what did I know about eating hot sauce? It was my first time. I was fifteen. I foolishly rammed the chip into my mouth, hot-sauce-corner first, so when the thing was completely in my mouth and I crunched it, the hot sauce grabbed the back of my throat, as if scraping the soft flesh of my tonsils with sharp fingernails.

The pain! No taste, only pain. Why did young people have to go through this? Why hadn’t the school counselors given us some sort of seminar, or at least tossed a brochure at us during freshman orientation? The library certainly had no books on the subject (I had checked—many times). And in 1982, we didn’t have the Internet, only magazines like this one that our parents and teachers promptly confiscated.

My throat burned. The back of my head screamed. My eyes flooded. The boys at the table watched silently. The jerk from Texas laughed.

In that moment, I experienced simultaneously an insane hatred for the eloquent bastard from Texas, and a feeling of accomplishment at finally undergoing this initiation. Even in the grip of pain, in that moment, I knew everyone would see me differently now. I had arrived. Mucus dripped from my nose, and I rushed to the bathroom as howls erupted from the boys at the table.

College was a time of experimentation and exploration. I had countless flings and a few serious relationships. I used the bland hot sauce they served in the school cafeteria, Frank’s Red Hot, only to make myself feel better. I was selfish; it was a relationship of convenience for me. Frank’s was always there, never judging, and ready to accept me no matter where I had been or what I’d been doing. I’m not proud of the way I treated Frank’s, but there were no secrets between us.

Several years after leaving college, I was in Denver visiting my brother, Philippe, who introduced me to a hot sauce that changed me forever. We were in his apartment on Pearl Street, and he had just cooked a pot of vegetarian chili. From the shelf, he pulled a bottle of hot sauce that was a darker red than I’d ever seen before. I looked at the label. Dave’s Insanity Sauce. I later learned that the mention of Dave’s, in certain circles, was tantamount to a secret handshake. Hot sauce connoisseurs know Dave’s.

Philippe held the bottle for a silent moment and then raised it reverently on high with both hands, arms extended and elbows locked. I laughed. I thought he was making some sort of religious joke, like the time he angered our mother by replacing the baby Jesus in the nativity scene with a rolled-up dollar bill.

Philippe wasn’t joking. He lowered the bottle and solemnly explained to me that one must approach Dave’s with humility and respect. I giggled. Was he kidding? He was not. My giggles stopped. He admonished me to observe very closely. He was going to demonstrate, he told me, and I needed to pay attention.

He stood over the bowl of chili and rolled his sleeves up past his elbows. Using his left hand, he gently removed the bottle top and placed it on the table, upside down, about eight inches to the left of his bowl. With his right hand, he raised the bottle and tilted it, ever so slightly, over the bowl. At the same time, he leaned his head down to the rim on the left side of the bowl, swiveling his gaze to the right and looking up into the mouth of the bottle. His bottle-hand rotated. His eyes squinted. At the edge of the bottle mouth, a small, red droplet appeared and bulged. Then, at just the right moment, Philippe tilted the bottle suddenly upward. The drop peeled away from the rim, plummeted through the air, and splashed into the chili.

Philippe sighed and lowered the bottle. He grabbed a napkin and wiped the sweat from his forehead. Then he looked at me. It was my turn.

He handed me the bottle and issued his warning again. I thought his flair was a bit much, but I did have the good sense to go easy with the Dave’s. I tipped the bottle and let one drop plop into my chili. A dribble was still hanging on the tip of the bottle, clinging to the glass threads. I wiped the drop from the bottle with my index finger, even as Philippe was screaming “NO!” He would later tell me he had experienced this moment in slow motion. It was too late. My finger popped into my mouth before he could stop me.

“I took Marie Sharp’s home that night.
We moved and danced with a dreamlike
slowness and calm I’d never known.”

At first it was sweet. It teased me, as if to make me want more—as if to make me believe it would never hurt me. And then the truth came out. A flood of saliva gushed from every gland inside my mouth. Philippe stepped back. My jaw dropped open, and I gagged. How can I describe this feeling, when words don’t work? Dave’s seemed to be doing two things at once: sledgehammering a metal spike through my mouth to the back of my throat, while repeatedly kicking me in the stomach with steel-toed boots. The floodgates of my nostrils burst open. Tears rushed from my eyes and poured down my face. I could barely stand the pain, even as my brain screamed in ecstasy: Yes, yes, yes. Harder. Faster. Burn me. Humiliate me.

That’s all I remember, though Philippe told me later that after dropping the bottle, I had performed a whirling-dervish dance around his living room with my head thrown back, squawking the refrain of The Doors’ “Touch Me, Babe.”

Over the next few months, Dave’s and I had a rocky relationship. I should have known from that first night that it wasn’t going to be easy, but I couldn’t resist. Dave’s continued burning me badly, and I kept coming back for more. During our entire time together, Dave’s had a curious way of making me feel guilty for the pain I was in. Luckily I came to my senses. I woke up one rainy October morning and walked out. I was done with hot sauce. Never again.

The gray autumn and the dark winter passed, lonely and cold, without even a drop of hot sauce. It was easy to force myself to suffer in the gloom of those chilly months, but the warmth of the following spring reawakened the channels of my yearning. On an April morning visit to A Southern Season in Chapel Hill, North Carolina, I planned just to dash in for two ounces of Okayti Wonder Tea, but moments later I was standing in the hot sauce aisle.

There it was on the shelf. I stared. I gently ran my fingers up and down the smooth glass of the bottle. Marie Sharp’s Habanero Pepper Sauce. I was mesmerized by its shimmering, radiant orange color. I rotated the bottle. Onions, garlic, carrots. Carrots? Wow. Its spell enchanted me. I lifted the bottle from the shelf and floated to the checkout register.

I took Marie Sharp’s home that night. We moved and danced with a dreamlike slowness and calm I’d never known. Oh there was burning, don’t get me wrong, but it was a slow, delicious burn, melded seamlessly with warmth and care and kindness and flavor. That was the new part for me, the thing that woke me from my stupor—the flavor. This was it: flavor and heat, tenderness and strength, yin and yang, the duality of opposites; for four fulfilling months, Marie Sharp’s elevated my consciousness and brought me to an awareness of myself.

That was two years ago. These days, as I’m thinking I might be ready for a new relationship, I’m no longer drawn to sauces like Tongues of Fire, Rectal Rocket Fuel, and Ass Blaster. My body has neither the agility nor the endurance it used to, and I’ve aged well beyond the mainstream belief that a bazooka-blast of heat is the only path to real gratification. I had fun when I was young, but now I want to settle down. I feel experienced now, and I’m going gently. I know that if I want a truly fulfilling relationship, I’ll have to let myself go, to release every ounce of my ego. I want badly to submit to something outside of myself, but I need to stay guarded and cautious. Burn scars run deep. The day will come—I know it will. Until then, I’m taking things slowly. Very slowly.