It’s called the “set-up,” the underlying theme of an appearance on a cooking show like “BBQ with Bobby Flay.” And since the
official State Question of New Mexico is “Red or Green?” it made perfect sense for that to be the set-up for the show.

Karen Juve, a supervising producer with Weller Grossman Productions, had asked me for assistance on their New Mexico
shoot, so I scouted locations, collected props, and arranged for the appearance of Arian Gonzales of Cervantes Food
Products. She would cook the red while I handled the green. Bobby would decide which was the best–and which was the hottest. 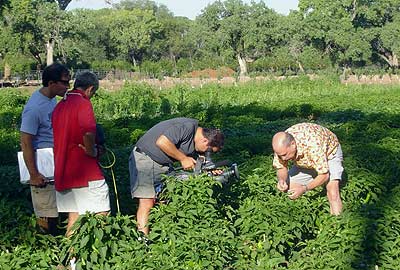 The shoot began at 7:30 am on Monday, August 16, 2004 in the chile fields at the Heritage Farm at the Rio Grande Botanic Garden in Albuquerque, with the help of Catherine Hubbard, director, and Kenny Autrey, farm manager. After taking shots of men in the field harvesting, producer Steve Lange, director Gordon Recht, and cameraman Jim Alario taped me tasting the ‘Sandia’ variety. 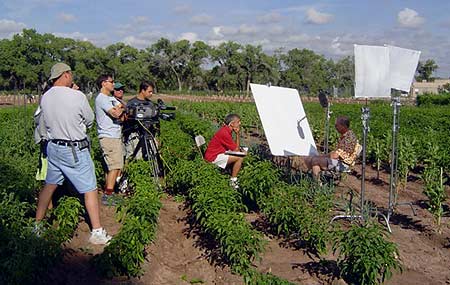 Using reflectors for the best possible lighting, Gordon positioned me on a chair in the field and asked me questions about the tradition of chile in New Mexico and how it related to barbecue. I replied that many New Mexicans used their grills to roast the chiles which were later incorporated into their barbecue creations. 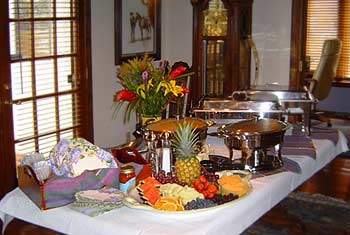 The location then shifted to the home of Bill and Roberta Sanders, the parents-in-law of Arian. They provided two nice grills, a complete outdoor kitchen, and this spread to feed the cast and crew. Bill is a retired radio station owner and Roberta owns Cervantes Restaurant at Gibson and San Pedro in Albuquerque. 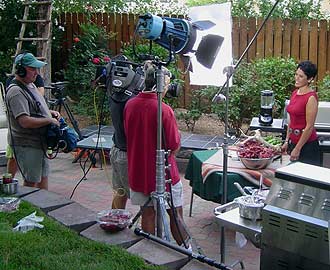 First up was Arian. She was preparing Chuletas de Cerdo en Chile Rojo, Estilo Cervantes, or Red Chile Pork Cutlets, Cervantes-Style, and first she had to make the red chile marinade. It was not her first time in front of a camera, so she handled it like a pro. Note her brilliant smile for the camera. 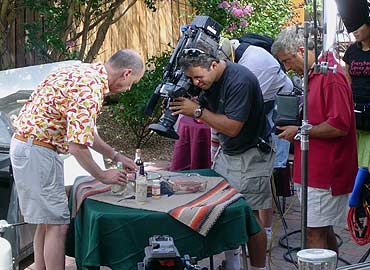 Next, I demonstrated the technique of grilling and then peeling chiles. Here I am preparing the marinade for my steak. It was quick and easy to make, but Gordon kept slowing me down for the camera. I dutifully followed the direction of the winner of two Emmys. 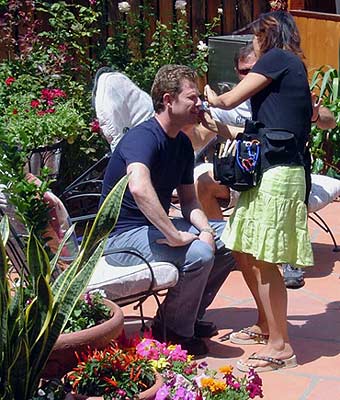 Bobby, whose driver got lost on the way from the Albuquerque International Sunport, showed up after our prep work. Here, makeup artist Sara Temlitz touches him up for his appearance. She also put makeup on me, but there was not much she could do to help my ravaged face. 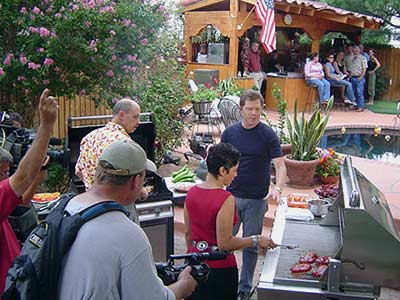 Gordon cues us, and with me at one grill, Arian at the other, and Bobby in the middle, the grill-off began. Bobby teased us into proclaiming each of ours the best. Arian said that red chile is the “soul of New Mexico” and I replied: “But green chile is its heart.” Bobby accused us of having rehearsed the bit, and Arian said: “No way!” 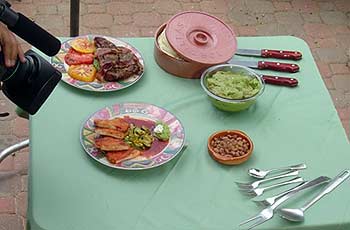 Jim took beauty shots of the plated food. That’s my green chile-stuffed steak at the top with some grilled heirloom ‘Giant Syrian’ tomatoes from my garden. Note the beautiful plating of Arian’s chuletas and the attractive side dishes. 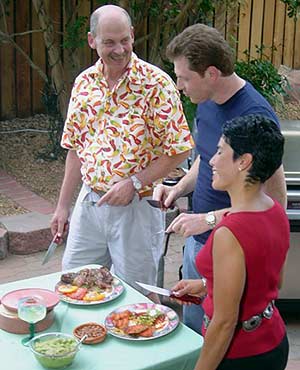 Bobby tasted our creations and diplomatically judged them to be of equal flavor. As far as heat level, he said there wasn’t much difference, but I could tell that the heat of my green chile surprised him. Heh, heh, while collecting props, I had dropped by Sichler Farm’s chile stand and bought some extra-hot ‘Barker’ pods! 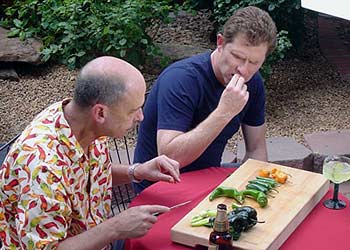 What would a chile shoot in New Mexico be without a taste-off? We tasted poblanos, wax chiles, New Mexicans (not the ‘Barker’), jalapenos, serranos, and habaneros, and the only ones with any significant heat were the serranos (surprisingly hot) and, of course, the habaneros.

The crew was great, the shoot wrapped, and we got to spend about a hour eating New Mexican food and drinking margaritas with Bobby. In person, he is exactly the same as he is on TV: unassuming, friendly, and funny. He told me that his next big project is a new Mesa Grill at Caesar’s Palace in Las Vegas. With the talented Bobby running the kitchen, that won’t be much of a gamble. “BBQ with Bobby Flay” airs Wednesday nights at 9 pm ET and Saturdays at 7 pm ET.

Inspect the chile pods and remove the stems, seeds and white veins.* Rinse and place the cleaned pods in a large bowl or saucepan and add enough hot water to cover. Soak for 30 minutes to 1 hour. After pods are completely reconstituted (pods should appear bright red and plump), remove them with tongs and place in blender with chile water to cover the pods. Leave about one inch space or more in the blender container. Add oregano, garlic and salt. Blend for 2 minutes (puree setting). If sauce is too thick, add more water and blend until skins disappear completely.

* Be sure to use rubber or latex gloves when handling chile pods.

In a shallow pan, place the pork cutlets in a single layer. Pour the blended marinade evenly over meat, cover and refrigerate for at least 2 hours. For more intense chile flavor, marinate overnight.

Preheat the grill on high. Reduce the heat 375 degrees. Remove the meat from the marinade and place it on grill. Reserve marinade for basting. Cook each side 2 to 4 minutes, depending on thickness of the cutlet. Baste the meat with marinade on each side before turning. Watch the meat closely as it will cook quickly, don’t overcook. You will want to keep pork moist inside.

This is one of our favorite ways of grilling steaks and we find ourselves using the basic recipe and altering it again and again. The combination of the different peppers and the chiles provide different spice and heat sensations in the mouth, and the green chile pulls all the tastes together. Serve this with roasted garlic mashed potatoes. Leftover steak can be turned into a fabulous Southwest Steak Sandwich by thinly slicing it and adding it to sourdough bread with Muenster cheese and more chile.

Slice the steaks horizontally to create a pocket. Do not cut all the way through the steak. Place a green chile in each of the pockets. Wrap a strip of bacon around each steak horizontally and secure with a toothpicks.

Place the peppercorns in a towel and pound with a hammer or mortar until roughly crushed. Press the pepper into each side of the steak.

Combine the habanero sauce, Worcestershire sauce, soy sauce, vinegar, and garlic. Place the steaks in a non-metallic pan, pour the marinade over the meat, and marinate in the refrigerator for a couple of hours. Bring the steaks to room temperature before grilling.

Grill the steaks over a medium-hot fire for about 12 to 16 minutes, turning often, for rare, and 8 to 10 minutes for medium rare. For medium-rare steaks, the internal temperature should be 150 degrees F. Feel free to slice it to check on doneness.

Variation: For those not enamored of peppercorns, omit and wrap the steaks in peppered bacon.