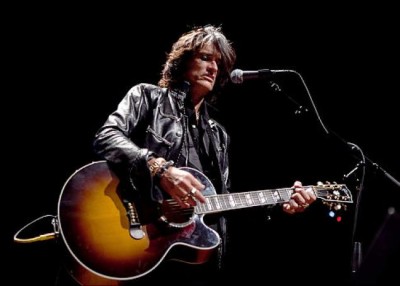 This is the story of how Fiery Foods & BBQ magazine managed to get Aerosmith’s Joe Perry to pose for the cover of the magazine, which became our January/February, 2004 issue. Here are the major players, in the order of their appearance:

Members of the rock group KISS

July 13 – I write to David Ashley: “The interview with Joe never happened. I got a call from his PR people that Joe was ‘indisposed in Hawaii’ and could not talk with me. Oh, well….showbiz!”

July 16 – I send David a proposal for an “Aerosmith Trivia Contest,” with winners with perfect scores winning autographed bottles of the sauce. David promises to pass it on to “Joe’s people.”

August – Joe’s people work on the questions and answers for the contest. Harald Zoschke, our webmaster, designs the banners and the contest pages.

September 27 – Joe calls me and I do the interview with him. He is thrilled when I tell him that more than 500 people have entered the contest so far.

October 3 – My interview with Joe is posted on our site and it’s still there.

October 15-30 – The contest ends, the results are tabulated, the winners are selected from the perfect scores in a drawing. We proceed with a completely impartial, scientific process: All perfect score print-outs are placed on my living room rug randomly. My Cornish Rex cat Roswell is placed in the center of all of them. The first ten she steps on are the winners. Drew Greco, the first print-out to receive a paw-print, is the grand prize winner. David Ashley sends the winners their prizes.

July 31 – Kinky Friedman, musician, philanthropist, author, and founder of The Texas Jewboys, appears on the cover of our magazine.

August 24 – David Ashley contacts me via email suggesting that Joe Perry is better looking than Kinky and would be a good cover model for our magazine. I agree to consider it, but in reality I am pumping my fist in the air and saying “Yes!”

September 10 – I write David Ashley: “Aerosmith is performing in Albuquerque Oct. 20. Should we take this opportunity to do some kind of a promotion with Joe, like take his photo for use in my magazine, or something?” David agrees and says he will contact Joe’s people.

September/October – Emails fly back and forth between Lois and Joe’s people as she tries to set up the photo shoot. Norm Johnson, our usual shooter, has a conflict, so Lois calls Pat Berrett, who agrees to do the shoot. By the weirdest coincidence in the world, Pat was the original food photographer for our first magazine, in 1988.

October 17 – The shoot is finally approved and Lois works with John Bionelli to set up the details. She is informed that no one knows exactly when Joe will arrive in Albuquerque for Monday’s concert. She spends the weekend lighting candles and praying.

9 am – The day of the concert and shoot has arrived. Thirteen thousand people are expected at the concert featuring Kiss and Aerosmith. The shoot is scheduled for 6:30, with Aerosmith to go on stage at 9:30. Plenty of time, I think. But how are we going to get into Journal Pavilion? Lois begins calling John for instructions, but he is traveling with the band and she can only leave messages on his cell. She begins to nibble Tums as she waits by the phone.

11:30 am – Still no word on how we convince security to let us backstage. I’m getting nervous. At our two martini lunch at the Quarters, my buddy Wayne Scheiner and I discuss options. His contacts with Ticketmaster get us the names of Journal Pavilion people that I send on to Lois. About this time, Lois is wishing we’d send on a couple of martinis.

1:30 pm – Finally, Lois gets word from John’s assistant that all of our names have been cleared for backstage passes. Just tell security, we are informed, and they will wave us through to the production trailers.

4 pm – Lois and Molly meet at Mary Jane’s and my house in the South Valley, and we all drive to Journal Pavilion. At this time in the afternoon, there is light traffic, as only a few of the hard core fans have begun making their way to the venue.

4:20 pm – We arrive in two cars at the security gate for backstage access. I give our names to the security guard, who uses his walkie-talkie to call backstage security. They have never heard of us. I start dropping names and he tries again. Someone has found the backstage list and we are cleared! Mary Jane and Lois exchange high fives.

4:25 pm – We park and talk our way through three additional security groups and are finally met by Joe’s people who show us the area for the shoot. It is in the wardrobe trailer and we roughly have a 12 foot by 12 foot space to work in. We are given our backstage passes and are told that the bands are sober and no booze is allowed backstage. Having been backstage at numerous concerts in the ‘70s, I am rather surprised, but don’t care because we are working.

5 pm – Pat Berrett arrives and we begin to set up the lights and backdrop seamless for the shoot. The wardrobe guy, Sam, is very nice to accommodate us, and I compliment him on the plugs piercing his earlobes. He also has a most interesting barcode tattooed on the back of his neck.

6 pm – Lois sets up a borrowed electric guitar as a chopping block as part of the set for the shoot, and arranges sliced tomatoes, onions, and jalapeños on it. Then she sits in for Joe and Pat shoots test polaroids until he is satisfied with the set-up. We are ready for Joe.

6:30 pm – We are told that the group is running late, so why don’t we get something to eat in the mess tent? They are kind enough to give us food tickets, and we dine on soups, steaks, potatoes, and vegetables. Joe Perry’s sauce is strangely absent, but then, a local caterer was hired. The dinner is delicious, but Molly bolts her food and gets ready to go back to the production trailers. “KISS is in makeup and I want to see them when they come out,” she explains. Oh, to be 28 again, I think.

7:15 pm – No later than 8:15 for the group’s arrival, I am told. The first band on stage, the Porch Ghouls, is already playing. Paul Stanley (the guy with black star on this right eye), in full makeup and five-inch-tall platform boots, comes out of his makeup room topless and goes to get a soda. He is 7 feet tall. Molly watches silently and once he disappears again, says, “No way!” and slaps the arm of the security guard. “Sorry to hit you,” she apologizes.

8:05 pm – We are cleared off the porches of the trailers so that the band and entourage will have a clear path to their dressing rooms. The band members nod and wave to us, and Steven Tyler gives a high five to Molly. She vows never to wash her right hand. John introduces himself and we show him the set-up. He takes one look at the chile-emblazoned apron we have as a costume for Joe, and he says: “Lose the apron–Joe will never wear it.” We lose the apron. The assembled women wish silently that Joe would pose in the apron… and nothing else. 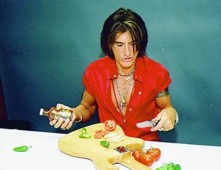 8:15 – As soon as Joe enters the wardrobe trailer in his red silk shirt, huge explosions echo from the stage. “Getting ready for KISS,” he says. “It may get a little hard to hear.” With Lois directing, Pat shooting, Molly strategically placed behind Pat to get Joe’s attention, and me shooting digital to document the event, the shoot begins. Joe looks fierce, then poses with his hot sauce in one hand and a butcher knife in the other. “To hell with this,” he says, putting the knife down and reaching into his pocket. He pulls out a huge silver switchblade and spears a jalapeño. Then he cocks his head, smiles, and Pat starts shooting. That will be the money shot, I think. 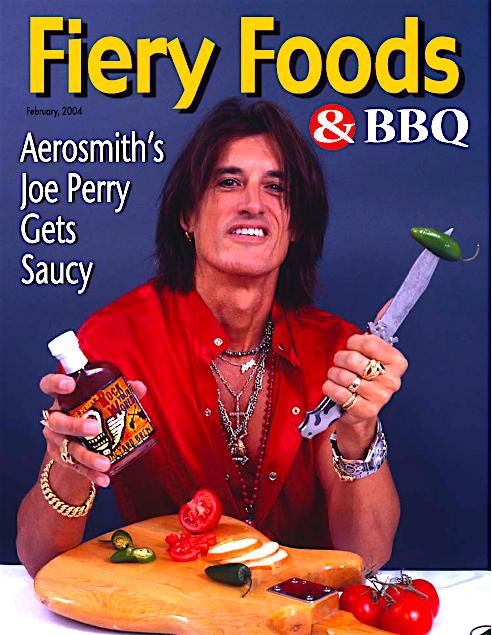 8:30 – The shoot is over, when Steven Tyler comes on the set and starts cracking jokes with everyone–he obviously is curious about what is going on. “What’s up, Skinny?” he says to Molly. “Look who’s talkin’,” Molly quips back. How she manages to remain cool on the outside while having an internal nuclear meltdown mystifies her fellow staffers. We thank everyone for their cooperation and Molly asks Joe for a brief interview. “Come on back to my dressing room,” he says, and everyone laughs. Is he serious? He is. Molly gets a really intelligent, interesting interview from him. Then it’s time for them to go on stage, for KISS is finishing up to thunderous applause.

9:30–11 – Just before Aerosmith goes on stage, Molly runs into the members of KISS coming back to their dressing rooms and gets to meet with them. She has a fun conversation with them, then sits in the VIP section, third row center for the Aerosmith concert, courtesy of Sam from wardrobe. She describes the experience as “Awesome. Literally.” A good time is had by all.

October 21, 10:30 am – Molly emails me a transcribed interview with Joe and a note: “Dave, last night wasn’t just a perk of working for you–it was the bonus of a lifetime.” I email the interview text to David Ashley, who writes back: “That was a hell of an interview!”