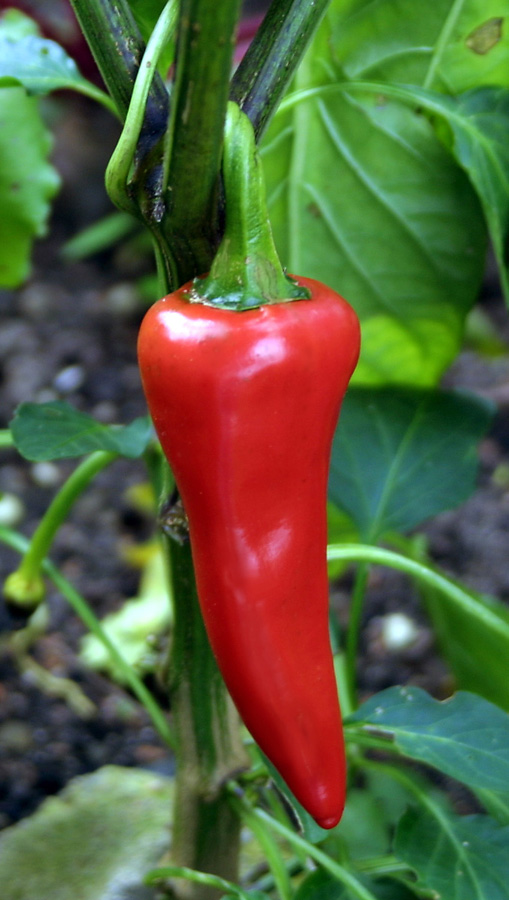 Some varieties of chile peppers are given treasured status in certain regions of the world, where they are celebrated in art, legend, the kitchen, and festivals. Paprika has such status in Hungary, the jalapeño in Laredo, Texas, and the mole varieties ancho and pasilla in central Mexico. The New Mexican varieties, grown in the state that produces more chiles than all the other United States combined, are worshiped from Taos to Las Cruces, and from Gallup to Tucumcari in the Land of Enchantment. But a little known chile is acclaimed in–of all places–southwestern France, where it has gained controlled-name status, much like Champagne sparkling wine and Roquefort cheese. That chile is piment d’ Espelette, or the Espelette pepper, and it has become a cultural and culinary icon in that part of Basque country.

When Columbus brought chile peppers to Europe from the Caribbean after his second voyage in 1493, they were first grown in monastery gardens in Spain and Portugual as curiosities. But soon the word got out that the pungent pods were a reasonable and cheap substitute for black pepper, which was so expensive that it had been used as currency in some countries. So the best thing about chiles–in addition to their heat and flavor–was that they did not have to be imported from India; anyone could grow them as annuals in temperate climates.

Carried by Spanish and Portuguese explorers, numerous varieties of chiles quickly spread throughout the Mediterranean region and Africa, and the rest of the Eastern Hemisphere, where they permanently spiced up world cuisines such as those of India, Southeast Asia, and China. However, there were some famous national cuisines that were not conquered by chiles; Italians, for example, utilized chiles only sparingly. The peperoncinis, for example, are used in antipasto, crushed red chiles are a topping for Neapolitan pizzas, and hot red chile powder as an ingredient in some pasta sauces. But no one region in Italy celebrates chiles. In France, however, chiles were established as a tradition in just one region the Nive Valley in the southwest, and especially in the village of Espelette to the south. It is believed that chiles were introduced into the Nive Valley by Gonzalo Percaztegi in 1523, the same year that corn first made its appearance there. At first it was thought to be related to black pepper and was even called “long black American pepper,” and it wasn’t until the 17th century that it was placed in its own genus. 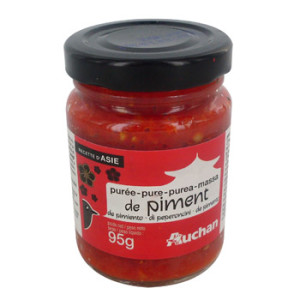 Much like ristras in the American Southwest, the red pods of the Espelette peppers are threaded on cords and are hung on the sides of buildings and from racks. The strings of peppers–translated variously as “braids” or “tresses,” are allowed to dry in the sun. They are then ground into powder or made into commercial pastes. Interestingly the earliest use of the ground Espelettes is connected to yet another uniquely American crop: cacao, or chocolate.

In the 17th century, chocolate became very popular in Europe both in candies and in drinks. Chocolatiers in Bayonne, perhaps influenced by tales of Montezuma’s favorite drink, combined Espelette powder and chocolate. A century later, hams from the Basque area were covered with Espelette pepper to redden the ham before curing. The powder was also used in the making of Bayonne hams and some pates, sausages, blood sausages, rolls, and pies. From this point on, Basque cooks began using the Espelette pepper in place of black pepper in seafood dishes.

About the same heat scale as hot paprika, the Espelette pepper is regarded by the French as a four on the scale of one to ten. In fact, hot paprika powder can be substituted, as can New Mexico red chile powder.

“The Celebration of Peppers” and Controlled-Name Status

Up until 1940, the Espelette peppers were not made into strings because the harvest was not big enough; the peppers were merely ground into powder. But as more of the peppers were grown, farmers started selling them as strings for decorative as well as culinary purposes. By the 1960s, the Espelette peppers became so popular that the village of Espelette, population 1700, established the Celebration of Peppers, a festival much like the Hatch Chile Festival in New Mexico. The first festival was in 1967 and it is held annually the last Sunday in October. It now attracts more than 10,000 people and features food, music, dance, and games.

As the popularity of the peppers grew in France, the farmers realized that they had a very unique product, one that deserved recognition and protection. They did not want farmers in other regions to grow, for example, paprika and call it Espelette. At first they formed cooperative enterprises to protect their interests, and eventually they applied to the National Institute for Trade Name Origins for an Appellation d’Origine Controlee (AOC). On December 1, 1999, and AOC was granted to Espelette peppers and products, giving it the same protection as more famous names, such as Champagne sparkling wine. Only ten communities are allowed to use the name Espelette: Espelette, Ainhoa, Cambo les Bains, Halsou, Itsassou, Jatsou, Laressore, St. Pee sur Nivelle, Souraide, and Ustarritz. The total growing area is about 3,000 acres. 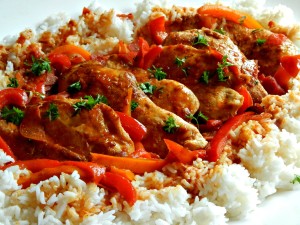 Piperade is a colorful pepper sauce that is only spicy when made in the Basque region. This simple but delicious dish is often served at the Celebration of the Peppers. Serve it boiled potatoes and green beans.

Heat 1/4 cup olive oil in a large saute pan and saute the onions and garlic for 5 minutes, stirring occasionally. Add the bell peppers and cook over medium heat for 10 minutes. Add the tomatoes and Espelette powder and cook for 20 minutes, stirring occasionally. Add the thyme, salt, and pepper and transfer to a bowl.Wipe out the pan and heat the remaining 1/4 cup of oil. Brown the chicken in the oil until golden, turning often. Pour the Piperade over the chicken, reduce the heat, cover and simmer until tender, about 30-40 minutes. Add salt and pepper to taste.

This is a classic veal dish from southwest France. If you cannot find Espelette Puree, use fresh red New Mexican chiles and puree them in a blender with a little water. Another substitute is to use fresh red bell peppers with New Mexico red chile powder. Serve with mashed potatoes and yellow squash.

Lamb axoa is a recipe typical of the Basque region, prepared in the same fashion as a stew. In France, lamb tongue and hooves are used to further flavor the dish, but I have omitted them here. Serve with a crusty French bread and red wine. Again, substitute hot paprika or New Mexican red chile powder for the Espelette. If you wish to make this more of a stew, add two potatoes, finely chopped, and double the bouillon.

In a large pot, heat the olive oil. Saute the onions and garlic for 5 minutes, stirring occasionally. Add the bell peppers and saute for 5 minutes, stirring occasionally. Add the lamb and saute another 5 minutes. Add the Espelette powder, the bouillon, and bay leaves, reduce the heat, and simmer, covered, for 25 minutes. If using potatoes, simmer until the potatoes are tender. Add salt and pepper to taste.