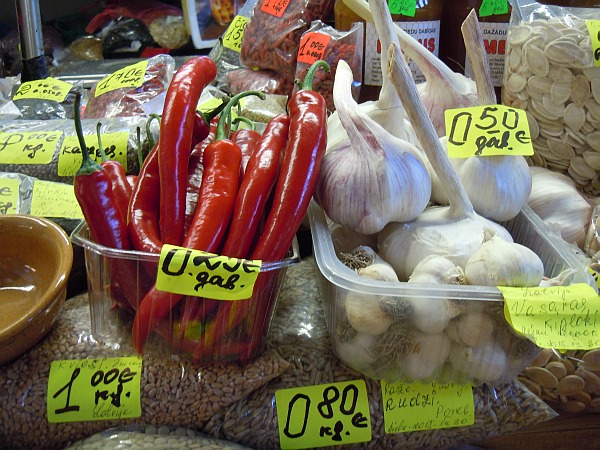 Story and photos by Sharon Hudgins

The nine countries that border on the Baltic Sea aren’t known for spicy cooking. Fish, pork, potatoes, and beets, along with mushrooms, sour cream, and dill, have been the flavors of the Baltic for centuries. Horseradish was the only thing that spiked up a cuisine where bland foods were routine.

But over the past two decades an invasion of foreign restaurants has brought tongue-tingling tastes from warmer climates to this chilly part of northern Europe. On a recent trip around the Baltic coast—from Sweden to Finland, Russia, Estonia, Latvia, Lithuania, Poland, Germany, and Denmark—I was surprised to discover popular Mexican, Tex-Mex, barbecue, Korean, and Thai restaurants with menus that tout their spicy fare. 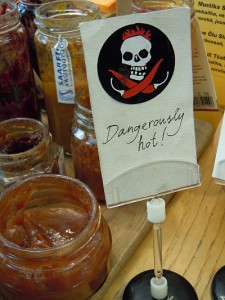 Warning sign next to red pepper jam in a gourmet food store in Tallinn, Estonia.

Americans traveling to this part of the world should remember that “hot peppers” on the menus are translated into English with the British spelling “chili,” not the American “chile.” So when you order something with “chili” in the Baltic, expect a dish that’s cooked with, or garnished with, hot peppers, not a spicy Texas meat stew.

At an open-air market on the waterfront in Helsinki, Finland, a food stand sells nachos with fried smelts and salsa. In another part of the city, the Cantina West restaurant advertises in English: “We combined FOOD with CHILI. Taste the right chili for every ingredient. Hand-made food with Finnish chili varieties. So hot you’ll drop.” And Helsinki’s Santa Fe restaurant , which offers Tex-Mex, Cajun, and BBQ, claims that it’s the “City readers choice 4 times” for “Best Food in Helsinki.” And you thought only the girls in Finland were hot! 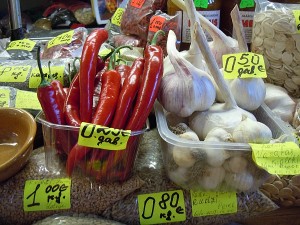 Peppers for sale at the big Central Market in Riga, Latvia.

Long thin peppers, red or green, are a visual symbol for “hot” in the Baltics. The logo of the popular Čili Pica restaurant chain, founded in Lithuania in 1997, features a long green pepper as the diacritical mark turning the red letter “C” in the company’s name into the sound of “ch” for “chili.” And the Finnish-owned Stockmann department store chain in the Baltics advertises its gourmet delicatessens with a huge sign showing a pretty woman wearing a strapless green evening dress and green stilettos, erotically embracing a long green pepper, taller than she is, while several other huge green peppers lurk like voyeurs on the sidelines. 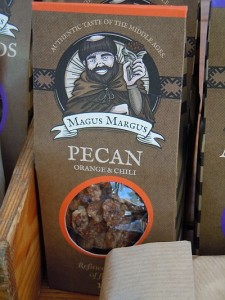 Spiced pecans at a street stand in Tallinn, Estonia.

After a month of eating my way around the Baltic coast, I awarded Tallinn, Estonia, the title of “hottest capital city.” Right off the boat, I found a little stand selling “Orange-Chili Pecans.” As I wandered through the Old Town, I came across restaurant ads with photos of pepper steak garnished with a long hot red pepper, spicy beef filet, and beef tips in spicy red pepper sauce. One restaurant menu listed “popular chili dumplings in creamy sauce, spicy ground beef crêpe in salsa sauce, ham and cheese crêpe with jalapeños, and chicken crêpe with vegetables and pineapple-jalapeño sauce.” 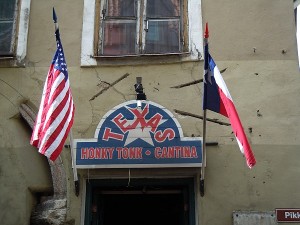 Entrance to the Texas Cantina in Tallinn, Estonia.

Tallinn’s Texas Cantina touts its spicy food with red stars on the menu indicating which dishes are “hot,” including Texas chili (yes, the meat stew), chipotle pork sirloin, enchiladas, and fajitas. And at the city’s largest bookstore, I even found a beautifully illustrated Tex-Mex cookbook published in Estonian.

Further proof of Tallinn’s taste for heat can be found in the well-stocked gourmet food store in the basement of the modern Viru Keskus shopping center, just outside the Old Town. Shoppers can load their baskets with jars of marinated red peppers, spicy salsa, pickled jalapeños, and red pepper jam, along with bottles of Louisiana and Tabasco hot sauces and plastic containers of freshly made Tex-Mex salad with salsa dressing. 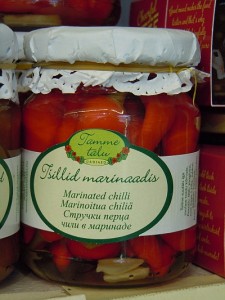 Marinated red peppers at a gourmet supermarket in Tallinn, Estonia.

If just looking at all that food makes you immediately hungry for heat, head for the colorfully decorated Amarillo Restaurant on the ground floor of the same shopping center, which serves “a fusion of hot Mexican food and the delicate flavors from the southern states of the U.S.” The mouthwatering menu lists hot wings, nachos, jalapeño poppers, tacos, burritos, tostadas, quesadillas, and fajitas. And their margaritas are reputedly the best in town.

So if you’re planning a trip to the Baltic region but wondering if you’ll have to survive on fish and potatoes the whole time, you’ll be in for a surprise. There’s plenty of heat to be found along the Baltic’s 5,000-mile coast. And if the touted spicy foods in restaurants and at street stands don’t rise to your preferred Scoville level, just pop into the supermarkets and load up on fresh hot peppers to spike any meal, even that boring fish and those boiled potatoes.

However, even traditional Baltic cuisines do have a few dishes that some local cooks turn into spicy fare. Following are recipes for three popular soups that you’ll find on the menus of restaurants throughout the eastern and southern Baltic region. If they’re not hot enough for your own taste, just add more hot paprika or cayenne.

Sharon Hudgins is a food and travel writer who has lived in 10 countries and visited more than 50 countries around the world. See more of her articles and recipes at sharonhudgins.com 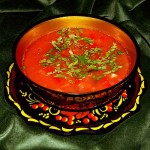 Solyanka
This soup of Russian/Ukrainian origin is also popular in the three Baltic States (Estonia, Latvia, Lithuania), Poland, and eastern Germany—an example of the influence of Russian foods on the cuisines of countries that were once under the domination of the Soviet Union. Solyanka's popularity is attributed to its versatility (using any kind of leftover meat or fish) and the combination of piquant flavors that make you crave a second bowl of it.
Ingredients
Servings: cups
Units:
Instructions
Share this Recipe 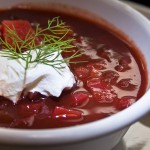 Spicy Beet Borscht
Borscht is another Ukrainian soup whose popularity long ago spread to the eastern Baltic countries, especially Russia where it's now considered a national dish. Although borscht is usually not a hot-peppery soup, I've eaten some surprisingly spicy versions of it on my travels in Russia and Eastern Europe.
Ingredients
Servings: cups
Units:
Instructions
Share this Recipe 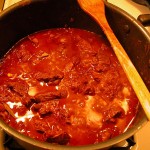 Goulash Soup by: Mark Masker
Originally from Central Europe, goulash soup is so tasty that its popularity has spread northward to the eastern Baltic region, too. Today you'll often find it on menus in Germany, Poland, and the three Baltic States. As with other tangy soups in this region, Hungarian paprika is the spice that gives goulash soup its kick.
Ingredients
Servings: cups
Units:
Instructions
Share this Recipe