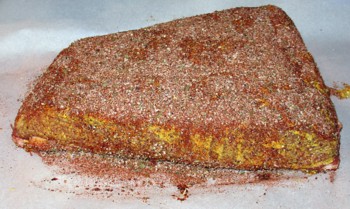 Food historians disagree how brisket became the staple for Texas barbecue. Some say the cattle barons didn’t want to feed the cowhands expensive cuts of meat so brisket — a cut of meat from the lower chest — was the meat of choice. Chuck wagon cooks in the 1800s learned that long, low temperature cooking over readily available mesquite could turn this stringy fat-laden piece of tough beef into a great meal and the tradition of brisket was born.

Others suggest the German immigration into Texas in the 1830s and the establishment of German-owned butcher shops brought brisket to the forefront as the butchers constructed smokehouses to prepare dried meats and sausages. Instead of grinding the briskets for hamburger, they were tossed in the smokehouses along with the sausages. (The German immigrants are also credited with bringing Wiener schnitzel, a breaded pan-fried veal cutlet, to Texas. Texans substituted tenderized beef round steak (which was abundant) for the veal and chicken fried steak (country fried steak) became a Texas staple.

Whatever the origin of brisket as the benchmark for Texas barbecue may be, few will argue that true Texas-style dry-rubbed pit-cooked brisket is sliced and served with sauce on the side, if any sauce is offered at all. Rarely will one find brisket slathered in sauce at a Texas roadhouse!

A dry rub is a mixture that is “rubbed” on the surface of the meat and allowed to marinate for several hours before cooking. While rub ingredients vary from cook to cook, they usually include (in various proportions) salt, paprika, some kind of sugar, garlic powder, chili powder and herbs such as oregano. For the mop, a combination of beer, cider vinegar, onion, garlic, Worcestershire and oil is usually used.

While most competition barbecue teams will prepare an entire untrimmed “packer cut” brisket which includes both the “flat” and the “point” with a strip of fat running between the sections and another layer over the top. Even after trimming a full packer weighes about 10 pounds and could take up to 16 hours to smoke-cook. Most backyard cooks opt for the smaller “flat” weighing about four or five pounds. Regardless of the cut, the final temperature should be 185 to 190 degrees F. for sliced brisket and as high as 205 degrees F. for chopped brisket.

Cooks vary, however, on whether the brisket should be cooked with the fat side up or down. Proponents of the “fat up” method say the fat rendering during the cooking helps to keep the meat moist. “Fat down” cookers say the fat dripping on the coals enhances the smokey flavor and having the rub on top allows the flavors to seep into the meat during cooking.

Brisket, like all meat sold across state lines, must be inspected for wholesomeness by USDA’s Food Safety and Inspection Service. Federal and state inspectors supervise the cleanliness and operation of processing plants to make sure the meat is not contaminated.

Grading, however, is optional and paid for by the meat processors. Of the eight quality grades only three — Prime, Choice and Select — are usually found at the retail level.

Prime is the ultimate in tenderness, juiciness and flavor. Although rarely found at a supermarket Prime is excellent for dry heat cooking such as roasting and broiling. Choice may have less marbling but it is still of very high quality. Choice roasts and steaks from the loin and rib will be very tender, juicy and flavorful and are, like Prime, suited to dry-heat cooking. Choice is often found in the specialty meat case in the supermarket. Select is very uniform in quality and somewhat leaner than the higher grades. While still tender, Select meats may lack some of the flavor and juiciness due to the lack of marbling found in Prime and Choice grades. Select meats benefit from marinating and cooking with moisture.

If a whole packer has been smoked, you’ll need to separate the point from the flat before carving as the grain in the two muscles run in opposite directionsand slicing should always be against the grain. 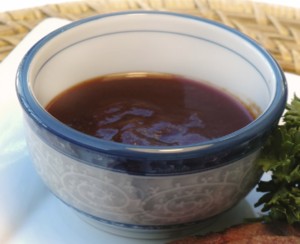 Also unique to Texas barbecue is the combination of two Texas favorites — brisket and Dr Pepper soft drink. Dr Pepper was created by German pharmacist Charles Alderton in Waco in 1885 and was nationally introduced at the 1904 Louisiana Purchase Exposition.

Combine all of the ingredients in a blender or food processor. Blend for two minutes. Store the sauce, refrigerated, in a covered container. Shake well before using. (The sauce will keep refrigerated for several weeks.) 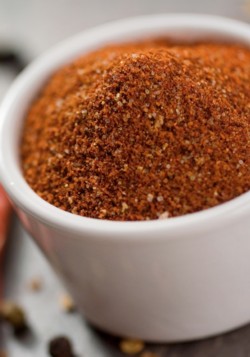 Brisket rubs vary from cook to cook with each having their special blend. This is a basic recipe that can be adapted by adding or eliminating ingredients.

Combine the ingredients in a bowl and stir well to incorporate. (This rub will keep stored in a covered container for two months.)

Mops are liquids containing oil and vinegar that are “mopped” onto meats during cooking. Allow the brisket to cook for about three hours then apply this mop every hour. 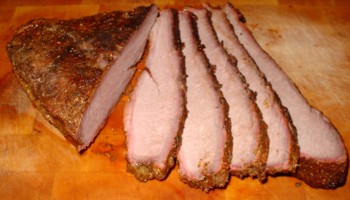 Cooking brisket is not something done after coming home from work but is a great weekend cooking project. The brisket could be cooked ahead and reheated. Like most barbecue recipes it is difficult to predict how long a brisket needs to cook.  It’s done when it’s done. This recipe requires advanced preparation.

Soak the brisket in one gallon of cold water mixed with one cup of white vinegar for 20 minutes. Rinse the brisket with cold water and pat dry. Brush with prepared mustard. Liberally apply the rub. Wrap the brisket in food film and refrigerate overnight. Remove the brisket from the refrigerator and bring to room temperature, about an hour. At the same time, soak the hickory chips in water for an hour.

Prepare the smoker or grill for indirect cooking. If you are using a kettle-style grill, start 20 briquettes in a charcoal chimney. When the coals are ash-covered, place them on one side of the charcoal grate. Place a disposable aluminum casserole or roasting pan on the opposite side. Add a handful of drained chips to the briquettes. Cover the grill. When a good smoke develops and the temperature stabilizes around 225 degrees F., place the brisket on the cooking grate on the side opposite from the charcoal. Cover the grill and maintain a temperature of 210 to 225 degrees F. Smoke the brisket for three hours adding additional briquettes and wood chips as needed. Continue slow cooking an additional two to three hours, mopping and turning every hour.

After five to six hours of cooking, wrap the brisket in double sheets of heavy-duty aluminum foil, add 1/2 cup of the mop, tightly seal and return to grill for another hour or so, keeping the temperature at 225 degrees F. (Paul Kirk, Ph.B., the Kansas City “Baron of Barbecue” and author of numerous barbecue books, calls this method the “Texas crutch” and says it steams the brisket. He doesn’t recommend foiling.)

Remove the brisket from the cooker and let it rest for 10 minutes before slicing against the grain.

(BBQ Editor Mike Stines has been conferred a doctorate in barbeque philosophy (Ph.B) by the Kansas City Barbeque Society. He is the author of “Mastering Barbecue.”)