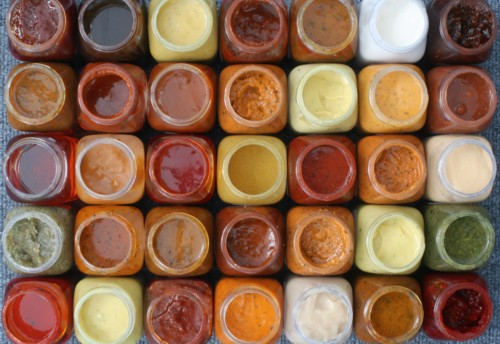 Some barbecue purists argue true barbecue doesn’t need sauce because the smoked meat and the herb and spice rub that is added before cooking provide more than enough flavor. Others say it is the sauce that makes barbecue great. One thing is for sure: There are as many barbecue sauces as there are backyard grill masters and each cook has his or her favorite concoction developed to bring out the best in their barbecue’s taste, texture and flavor.

In his comprehensive book Championship Barbecue Sauces (Harvard Common Press, 1998),author Paul Kirk, Ph.B., the Kansas City Baron of Barbecue and a seven-time world grand champion, gives excellent advice: “A good sauce seasons and enhances,” he says. “It is not intended to hide or overpower or dominate! A sauce can give contrasting or complementary flavors. It can also add moisture, texture and visual interest to your barbecue.”

Barbecue Sauces Have Amazing Variety
Most agree there are four major regional areas for barbecue–Kansas City, Texas, the Carolinas and Memphis–but even within those geographical areas, barbecue variations abound with different types of meat and sauces. There are also two varieties of barbecue sauces, sauces applied during the cooking (properly called mops or bastes) and those applied near the end of cooking or served at the table, known as finishing sauces.

“There are generally considered to be four types of barbecue in the country and they, by and large, are broken down by the type of sauce used in basting and also as a finish sauce,” explains Lake E. High Jr., a South Carolinian and barbecue historian. “Those four, in order of historical emergence, are vinegar and pepper, mustard, light tomato and heavy tomato. And while there is always disagreement on the varieties of preparation, such as whether one should use a dry rub or a wet rub and various other culinary arguments, all of the many sauces used in America generally will fall into one of those four basic groups.”

A big pork rib and beef brisket town. Kansas City sauces are usually tomato-based with vinegar and are sweet, thick, spicy and commanding. Many believe Kansas City barbecue to be the best combination of all the regional styles.

Beef country! The sauce used is a tomato-based blend spiked with chili powder, paprika and cumin, limited only by what’s in the pantry.

Specializes in Boston butt (shoulder) pulled and bathed with a thin tomato-based sauce with a strong vinegar taste. Sometimes Worcestershire sauce and molasses are added to the sauce.

Historically regarded as the birthplace of barbecue in America, this is where Spanish settlers met with South Carolina Native Americans in the 1500s. Again, “pulled” pork is the meat but the sauce can be one of four different types including a mustard-based variety with vinegar and honey or molasses.

Ribs and shredded pork dominate in Memphis. Memphis ribs come wet or dry–with or without sauce–but most come dry with a thick crust of dry rub. Western Tennessee shredded pork is mixed with a sweet tomato-based sauce, somewhat less spicy than a Texas-style sauce.

Sauces here include a mild tomato-based sauce, a peppery hot sauce, or a unique black sauce made of a basic vinegar sauce with molasses. During cooking, a combination of Worcestershire sauce, vinegar, lemon, salt, black pepper and water bastes the meat.

Barbecue in Alabama is traditional Southern-style, but what makes Alabama stand out is its barbecue sauce. Unlike others that are tomato-based, northern Alabama features a white barbecue sauce, similar to a classic French BÃ©chamel. Made with mayonnaise, vinegar, salt and pepper the sauce adds a delicate flavor to barbecued meats.

Boutique Competes Against Mainstream
Although Southern cookbooks in the 1800s make mention of barbecue sauces, the sauce was usually just butter and spices applied to the meat while it was cooking. In the mid-1920s, the first commercially prepared barbecue sauce was manufactured by the Louis Maull Fish and Cheese Co. in St. Louis (the sauce is still made today) but it wasn’t until the mid-1940s, when Open Pit was introduced to the food service market, that a commercially available sauce was offered nationally. In 1953 Open Pit expanded into the retail market in Detroit.

Open Pit was acquired by General Foods Corp. in 1960 and became part of Kraft Foods in 1989, when the two companies merged. Today, Open Pit is still owned by Kraft in the food service market, while the retail division was sold to Vlasic in 1987. In 2001, Vlasic was acquired by Pinnacle Foods. Open Pit was the leading sauce Today, Open Pit offers six flavors of its “original” style sauce and three flavors of the “Thick & Tangy” sauce that it introduced in 1986.

Not to be left out of the growing market for barbecue sauces, the Pennsylvania-based H.L. Heinz Co. entered the fray. Heinz now produces the Jack Daniel’s lines of sauces.

K.C. Masterpiece sauce, developed in 1978 by former child psychiatrist Dr. Rich Davis of Kansas City, is another major national brand. When K.C. Masterpiece was sold to a division of Clorox Co. in 1985, sales were more than $4 million annually. The company today produces nine different flavors of barbecue sauces.

Another player entered the retail market two years ago when French’s introduced its Cattlemen’s sauce to the retail market. Available to the food service industry for nearly 30 years and the number one selling food service barbecue sauce, Cattlemen’s has been used by the grand champions at the prestigious Memphis In May World Barbecue Championship for the past 14 years.

Adding further to the mix of commercial sauces is the plethora of “boutique,” or premium, sauces that are carving small niche markets throughout the country. Thanks to the Internet, these regional sauces that have existed for years in near obscurity are now competing against the mainstream sauces. A very popular specialty sauce is Bone Suckin’ Sauce produced by Ford’s Gourmet Foods (BoneSuckin.com) in Raleigh, N.C. It’s a western North Carolina style sauce that is smoky with tomato and apple cider vinegar sweetened with honey and molasses. The sauce was developed by Phil Ford in 1987 and reached the retail market in 1992. 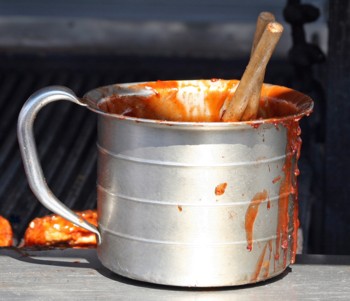 Create Your Own “Signature” Sauce

“Keep good notes on what you did,” recommends Culinary Institute of America graduate Richard McPeake of Kansas City. “Test your final product and determine what you like or maybe don’t like. When going back to retest, only change one ingredient at a time.” Chef McPeake is the author of “Backyard BBQ,: The Art of Smokology” and a member of the Rib Stars barbecue team.

Here are a couple of recipes I developed for two classic barbecue sauces along with my take on Alabama White Sauce. You can use them as a starting point to create your own signature sauces. 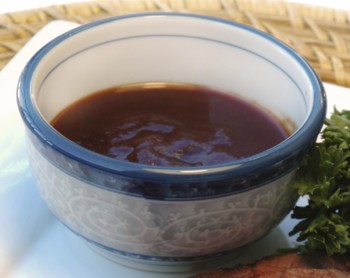 Don’t be intimidated by the number of the ingredients! This is a basic barbecue sauce that can be used on pork or beef. It will keep, covered and refrigerated, for up to four weeks.
1/2 cup (1 stick) unsalted butter

Melt the butter in a large saucepan over medium heat. Add the onion, garlic and jalapeÃ±os. Cook, stirring occasionally, until the onions wilt. Add the paprika and cook briefly. Add the remaining ingredients and stir well to incorporate. Bring to a boil, reduce heat and simmer partially covered for one hour.

Thanks to the German immigrants that populated South Carolina in the 18th century, mustard became a popular condiment and the base for this unique barbecue sauce. One of the more popular commercial mustard-based sauces is Maurice’s Carolina Gold BBQ Sauce. This is my version on the traditional South Carolina sauce.

In a medium saucepan over medium heat combine all of the ingredients. Stir and simmer for five minutes to dissolve the sugar.

Alabama White Sauce
“Big Bob” Gibson of Decatur, Ala., is credited with creating this sauce in 1925. Although this is not his recipe, this sauce is good on any barbecue, whether chicken, pork or beef. It’s also great on fish, potato salad and cole slaw. Because it is mayonnaise-based, it should be used as a finishing sauce and applied at the end of cooking or served at the table. The sauce will keep in the refrigerator for a couple of weeks.
1 cup good-quality mayonnaise

Combine all of the ingredients in a medium mixing bowl and whisk well to combine.

Remus Powers Ph.B., known in real life as Ardie Davis of Kansas City, is one of the premier barbecue experts in the country and the author of several barbecue books including The Great Barbecue Sauce Book (Ten Speed Press, 1999). This is his recipe for a classic Kansas City style sauce.

Place all of the dry ingredients into a bowl. Add the vinegar and stir. Add remaining ingredients and stir until mixture is thoroughly blended. This sauce may be served at room temperature or heated.

Although President Lyndon B. Johnson, a Texas native, was known to host barbecues for visiting dignitaries at both the White House and his Texas ranch, he was not the first president to enjoy barbecue. The Eisenhower Center in Abilene, Kansas, the presidential library of Texas-born President Dwight D. Eisenhower, has this recipe archived from the 34th president’s personal collection.

Combine all of the ingredients in a medium saucepan. Bring to a simmer over medium heat and cook, stirring occasionally, for about 15 minutes. Use for basting meat or chicken and serve as a table sauce.

Yield: Enough for 5 pounds of meat

Dave Klose of Houston has been a world-renowned manufacturer of custom barbecue smokers since 1986 (www.bbqpits.com). Here’s his recipe for a Texas-style barbecue sauce.

Combine the ingredients in a medium saucepan over medium heat. Bring to a simmer and cook, stirring occasionally, for 12 minutes.

This sauce is a basting sauce used when cooking a whole hog or shoulder. “It’s so simple that almost no one makes it for commercial sale,” Lake High explains. “If they do they always add some ‘secret ingredient’ that just is their favorite spice. Northerners and Westerners like chile and cumin but Southerners seldom add it and I certainly don’t. If you like it hotter, add more red pepper. If you want it less hot, use less next time.”
1 gallon white vinegar (use a good brand not store brand)

Combine all of the ingredients in a large mixing bowl and whisk to incorporate.

Barbecue editor Mike Stines is the author of the critically acclaimed Mastering Barbecue [Ten Speed Press, 2005]. He has been conferred a doctorate in barbeque philosophy (Ph.B.) by the Kansas City Barbeque Society and is one of 26 persons in the world to hold the Greasehouse University degree. His website is CapeCodBBQ.com.