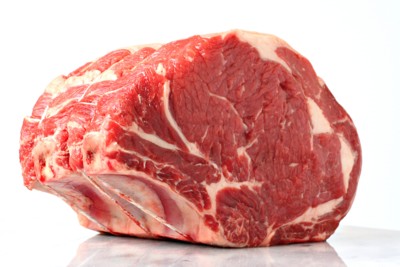 Prime rib of beef is my favorite cut of meat, period. When I was growing up in the ’50s, my mother Barbara roasted it on special occasions–always on Christmas Day–and she was a master roaster. In those days, most home cooks ruined their roasts by overcooking them, but not my mom. Rare or medium-rare was her standard, and after the roast was carved by my dad–or by me or my brother Rick, when were old enough–mom would carefully collect the blood-red juice with globules of fat swimming on top, pour it into a wine glass, add a light sprinkle of salt, and drink it. She was quite the carnivore! And she always served the prime rib slices with horseradish.

The term “prime rib” for a certain cut of beef roast was first used by Charles Ranhofer, the chef de cuisine at the world famous Delmonicos in New York from 1862 to 1896. The term was in use for at least forty years before USDA grading. In 1897, Ranhofer wrote the book The Epicurean, which was the standard reference for decades for any chef aspiring to be world famous. In the book, he notes that the “prime rib section” includes the portion from the sixth to the twelfth ribs, and no other ribs. The fifth rib forward is part of the chuck and the thirteenth rib backwards is part of the loin. Ranhofer’s definition holds to this day.?Selecting the Roast

When buying a prime rib roast, you of course want the highest grade possible, which is USDA Prime. Unfortunately, only 20 percent of beef cut in the U.S. is graded Prime, and most of that goes to high-end restaurants that specialize in beef. Some high-end grocery stores and butchers stock Prime beef–ask your for it at your market–but most likely you will be buying Choice grade, which is still excellent. Here are some tips on buying the roast. Avoid buying a roast on display in the meat section unless it has a packaging date of the same day you’re buying it. Instead, ask the butcher to cut one for you and tie it. Never buy a roast that has been injected with flavorings or tenderized. Ask the butcher if the roast has been dry-aged by hanging in a cooler to dry out. If you are anti-fat, don’t even think about buying prime rib because the roast should be well-marbeled with thin lines of fat running through it. The marbling gives the roast its unique flavor. Big chunks of outside fat, the steer’s equivalent of lard in a pig, should be trimmed. Always buy bone-in rib roasts because you will be cooking those ribs later on the grill.

Recently, I bought an 8-pound prime rib roast and it set me back $42. The roast yielded five lunches and five dinners for two, at a cost of $2.10 per serving. So what seemed like an expensive roast at first turned into a bargain–and inspired this article. The plan, then, is to smoke the roast and then create some tasty uses for the leftover meat.

First determine the degree of doneness you want the roast to be. I would suggest either rare or medium rare, since most of the meat will be cooked again in the additional recipes. If you like your meat cooked well done, I suggest you choose a pork butt. For prime rib, a finished internal temperature of 130 degrees F. is rare, 140 degrees F. is medium-rare, and 150 degrees F. is medium.

The keys to success are lightly smoking with mild wood, such as oak or pecan, in small amounts, using a meat thermometer, and avoiding checking on the roast, thereby letting the heat out when you open the door to the smoker. Additionally, I recommend using a dedicated smoker rather than a grill to which you constantly have to add charcoal and soaked wood chips over a long period of time. The temperature in the smoker should be 200 to 225 degrees F. An 8-pound roast should be ready in seven or eight hours

First, remove the roast from the refrigerator three hours before you plan to smoke and cover it with the rub. This will allow the roast to come to room temperature. Place it in the smoker on a flat baking sheet and avoid checking it constantly. There are remote thermometers that will allow you to check the internal temperature of the roast.

A technique increasing the crust on the roast is to remove it from the smoker when the internal temperature is 25 degrees less than the doneness you are aiming for. Then the roast is placed in a 400 degree F. oven and heat is turned off. The roast remains in the oven for about 20 minutes, then it is removed and tented with aluminum foil and allowed to “rest” for another 20 minutes. Even if you don’t use the oven technique, rest the smoked roast from the smoker in the same manner.

After you’ve enjoyed the freshly smoked prime rib, cut the main roast away from the ribs. Then cut the ribs apart and freeze them if you’re not going to grill them for a few days. Thinly slice as much of the roast as you will need for sandwiches–these slices can be frozen too. The remaining meat can be diced for the hash and curry recipes or frozen whole for use in many different recipes.

Serve the prime rib slices with the Creamy Horseradish Sauce in the sandwich recipe, below. I also recommend garlic mashed potatoes, sauteed mushrooms, and steamed asparagus in a lemon aioli sauce.

To make the rub, combine all the ingredients in a bowl and mix well. Store any unused rub in a sealed container in the freezer. (The yield is approximately 2/3 cup.)

Follow the directions for rubbing and smoking as described in the text, above.

Because this is my favorite barbecue sauce, the recipe makes much more than you will need for the three or four ribs from one roast. Simply divide the remaining sauce into 3/4 cup measurements and freeze until needed again. And because the ribs are already cooked, the time on the grill is very short. Serve with coleslaw and oven-baked french fries.

3 tomatoes, cut in half

3 or 4 smoked prime ribs, cut from the roast and separated

To make the sauce, in a bowl, combine the chipotle chiles with boiling water and soak for 30 minutes or more to soften. Chop the chipotles finely. In a medium saucepan, heat the oil and sautÃ© the onion. After the onion is translucent, add the garlic and continue to sautÃ© for 2 minutes.

To roast the bell peppers, onions, and tomatoes, place them on the grill over a medium fire and grill until they are soft and slightly blackened. Remove, peel, and chop the vegetables.

In a large sauce pan, combine all the ingredients and bring the mixture to a low boil over a medium heat. Reduce the heat and simmer for 20 minutes. Let the mixture cool and puree in a blender or food processor until smooth. You can thin the mixture with water if you so desire. (The yield is about 4 cups and the heat scale is medium.)

To grill the ribs, heat the grill to medium-hot. Place the ribs on the grill and cook for about 5 minutes, turning frequently to avoid flare-ups from the fat in the ribs. Brush the BBQ sauce over the ribs and cook for another 2 minutes, taking care that the sauce does not burn. Transfer to a platter and serve additional sauce on the side.

Here is another incredibly easy but tasty way to use the leftover prime rib meat. Of course, you can add plenty of other ingredients to this sandwich, like onions, lettuce, tomatoes, green chile, and cheese, but the meat is so flavorful that it can stand alone with just the horseradish sauce.

To make the sauce, combine all of the ingredients in a bowl and stir until well mixed. Allow the mixture to sit for 15 to 20 minutes to blend the flavors. (The yield is 2/3 cup.)

To make the sandwich, spread the sauce over the two slices of bread, lay the slices of prime rib meat over one of the slices, add salt and pepper to taste, and top with the other bread slice.

This is a great breakfast dish and is a meal in itself when each serving is topped with a poached egg. Have your favorite bottled hot sauce handy if the hash is not hot enough for you. If you would like an accompaniment, how about a fruit salad with mangos, bananas, peaches, and pineapple?

Boil the potatoes in salted water until tender, about 8 minutes. Remove, drain, and place in a bowl with the meat.

In a skillet, cook the bacon over medium heat for 5 minutes, stirring often. Add the onion and bell peppers and cook, stirring often, for 5 more minutes. Remove this mixture with a slotted spoon and add it to the bowl with the potatoes and meat. Add the green chile, salt and pepper to taste, and mix well.

Remove all but about three tablespoons of bacon fat from the skillet, add hash mixture and cook over medium heat for about 5 minutes. Do not stir it but take care that it does not burn. Turn the hash with a spatula and cook for 5 more minutes. Remove to plates, garnish with the parsley, and top with poached eggs.
Yield: 4 to 6 servings

Soak the kaffir leaves in hot water for 10 minutes, then drain.

In a large saucepan, heat one cup coconut milk over low heat, stir in the red curry paste and the lime leaves, and simmer for 2 minutes.

Add the beef, stir, and cook, covered, for about 30 minutes over low heat. Add the sugar (if using), fish sauce, the remaining coconut milk, the water, potatoes and salt. Cook, covered, over low heat for 30 minutes. Remove the lime leaves before serving.