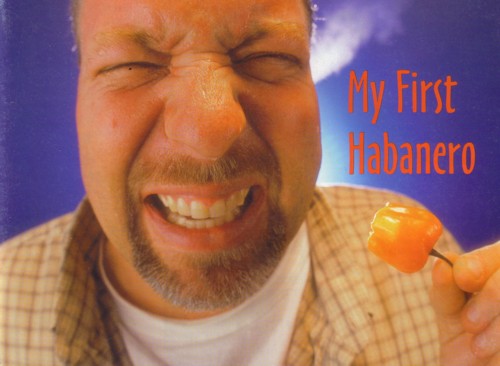 People often ask me how I reached the pinnacle of pepperdom and, after an indulgent chuckle, I take a sip from my perfectly pungent Bloody Maria and retell the oft-told tale of my passionate indulgence.

I used to be a normal guy, owner of the Snoozing Pines Trailer Park and the kinda country bumpkin who knew that there are exactly seven weenies in those little tin cans of Viennas. My idea of a hot and spicy meal was when I asked the waiter for an extra grind of black pepper on the bland gravy on my chicken-fried steak. But during one long, hot summer, my life and eating habits changed forever when I discovered the hot stuff.

My hot and spicy adventure began with fast food. When I drove my Like a Rock pickup to the ordering window at Burger Doodle, I noticed a new thing on the menu: the Pepperjack Carbo-Burger. Now, I’m an educated guy with an official GED, but I’d never heard of pepperjack. I knew about lumberjacks, but their bark had nothing to do with this bite. Ha, ha.

“What’s pepperjack?” I asked the girl in the window, who looked a little like Loretta Lynn on steroids.

“Four Pepperjack Carbo-Burgers,” I answered. “With fries and a cherry Coke.”

With Carbo-Burgers in hand, I drove to my favorite duck pond, parked the Like a Rock near the boat ramp, and chowed down. I immediately felt a little tingle. In my mouth, of course. Then a slight burn on the tip of my tongue. I liked the feeling. And I wanted more.

I soon discovered that spicier stuff could be found at the local Snatch ‘n Go: snacks. I became a born-again snacker, switching from ordinary Cheetos to cayenne-coated chitlins. Instead of Mr. Salty potato chips with onion dip, I went for hot pepper jerky. It was a lot spicier and not as messy to eat while driving. I could hold the jerky in my mouth while shifting the Like a Rock into four-wheel drive during the ‘coon hunts.

But it wasn’t enough. I wanted more heat. Lots more. So I told everyone about my wants and needs. And my hot desires, too.

And my girlfriend, Bo Toxeen, said we should try a Thai restaurant.

“Just wear a turtleneck,” she suggested.

“Kinda slimy,” I said, thinkin’ about them alligator snappers I caught on trot lines in the river.

“A tee shirt and your NASCAR jacket will be fine,” she told me.

So we went to Restaurant Row at the nicest place around, the Hatfield-McCoy Mall on the Shoeless bypass near Snitch Junction, and sat down at a table in Thai One On, that Asian franchise place. The sound effects were really nice.

“But it’s instrumental music,” I protested.

“Singha’s a beer,” she explained.

“They have beers in foreign countries?”

I tried the Singha beer and it was pretty good. Funny lookin’ label, though. The waiter, who looked like a student at Shoeless Junior College, had a triple-pierced nose and a tattoo of what looked like a leaf from a bush on his arm. I didn’t ask.

Bo did all the ordering because the menu was very complicated and I couldn’t pronounce the weird words.

Bo looked at me. I looked back at her and shrugged my shoulders.

“Hot,” she said with a sly grin. Uh oh, I thought, my goose is cooked. But they weren’t serving goose. They served a salad with meat in it. That was strange, but heck, I’ve eaten pig cheeks plenty of times, so who was I to complain?

“What are these, little string beans?” I asked, popping a teeny green thing into my mouth.

“Stu, don’t!” Bo shouted, but it was too late. It felt like the backflash from a nitro-fueled dragster on my tongue that spread all over the inside of my mouth the way napalm burns the jungle in those Rambo comedies. My heart started pounding like a jackhammer tearing apart the sidewalk in front of the Wal-Mart, and the sweat started pouring down my face like it does on that lead singer of the hip-hop group, Ten Pounds of Poop, on MTV. (I watched it once while waiting for “The Dukes of Hazard” to start.)

“What are those thangs?” I gasped, after finishing the salad.

“I like them,” I confessed, and the rest of the meal was easy. Some sorta spongy white things in a green sauce–

“Scallops in green curry,” Bo said. I had never heard of scallops but I had a curry brush that I used on my mare.

“This ain’t horsemeat, is it?”

“Seafood,” she promised, and I tried it. The scallops were gritty but tasty and the sauce was too mild after all those Thai peppers, so I asked the waiter for more peppers. He looked at me like I was from some foreign planet, but brought me a plate of them.

“Yum,” I said, but the waiter thought I said “yam” and brought another meaty salad, which I ate.

I left the restaurant feeling really good, you know, peaceful-like. My mouth was still burning, but it was a nice friendly burn, like a simulated oak fire in my doublewide on a snowy night. And I was feeling romantic. When we got back to the Like a Rock, I cuddled Bo in the front seat and whispered in her ear.

My friend Snooker had one of the largest non-organic rutabaga farms in Wobble County but I had no idea that he was growing peppers. I called him up on his non-cell phone and we agreed to meet for non-light brewskis at the Elbow Bender Bar in downtown Shoeless. It was one of those nights that makes you proud your neck is red. There was topless bull ridin’ on the TV and the band Short and Stumpy was playing my favorite tune, “It’s the Things You Do to Me That Make Me Do the Things I Do to You.” Snooker had relatively clean overalls on for a change and, as he racked the balls for a game of Cheater, he asked: “Whazzup?”

“What. Is. Up?” he repeated, dropping the urban accent.

“I hear you’re growin’ peppers,” I said with a grin.

“What’s it to yuh?” he asked, breaking the rack and sinking the number 17 and 19 balls. He acted like he was growin’ marihootchie or somethin’.

“I wanna try the hottest pepper in the world,” I confessed, slamming a bank shot that jumped off the table and hit a filly in the line dance on her left knee.

“You’re a virgin,” Snooker laughed, doing a behind-the-back dribble shot which knocked the16 ball into the left post hole.

“Am not,” I snapped back defensively. “I got four kids. Three a buckin’ and one in the chute.” Of course, I meant my two boys by my ex-wife Ima Doppler, my daughter Cornie by my second ex-wife Cindy Dee Wampler, and the possibility that Bo was pregnant, maybe by me.

“No, not that kinda virgin,” drawled Snooker. “I mean you’re a habanero pepper virgin.”

“Habanero–that’s a foreign word,” I guessed.

“It’s Spanish,” Snooker explained. “It means ‘have a hot one.'” He won the game by stealing the number 21 ball and putting it in his boot. That’s why they call the game “Cheater.”

“Come on out to the farm tomorrow, Stu. Make sure you’re not followed.”

The next day I drove the Like a Rock to Snooker’s farm just beyond Pitiful Swamp. He was waiting on his tractor by the front gate. “After he disarmed me and I paid a cash deposit, Snooker took me on a tour.

“Non-organic farming is big business,” he said. “But top quality chemicals cost me a fortune.” Just past the rutabaga vines ripe with brownish fruit were three acres of pepper plants four-feet tall and loaded with peppers. The bright orange pods looked as innocent as newborn piglets suckling on a sow, but I had a hunch that they packed a punch.

“I’m makin’ a fortune selling these pods to the Shoeless Hot Sauce Factory,” Snooker told me. “They make Heat Up Your Heinie Habanero Hell Hot Sauce, the best-selling sauce on the Internet.”

“Never mind. Go ahead,” urged Snooker, plucking a pod from his favorite bush he called “Dubbya.” “Take a big bite.”

My daddy always told me that when faced with a challenge, run like hell, but something drew me to that seductive pod like a moth to battery acid and I bit into it. Remember the first atomic blast in 1944 set off in Santa Fe, New Mexico? It was just like that in my mouth, except more. Maybe like the first hydrogen bomb explosion on Thong Atoll in Hawaii. My tongue knotted up like a tangled lariat. Sweat rolled down my face like…well, just say I was wet with sweat. My fillings melted and dribbled metal down my chin. My earwax vaporized and poured out of my ears like the exhaust from a semi tractor on a cold morning. I was shaking like a leaf on a fuzzy tree, to quote The King.

I spit out the seeds, wiped my face on the towel he kept on the seat of his tractor, and gave him the verdict: “It’s a pretentious little pod with a nice fruity and slightly buttery bouquet, a hefty body, a complex yet earthy palate, and a Scoville intensity that rivals Dante’s famed Inferno.”

Snooker grabbed my damp arms and shook me. “Where’d you learn to talk like that? Whaddya mean?”

I came to, my breath still as hot as the fumes from a volcanic vent. “I momentarily lost track of my whereabouts,” I told him. “Must be a holdover from Bo’s wine tasting class.”

I tenderly plucked another pod from Dubbya, held it close to my unpierced nose to inhale the intoxicating apricot-like aroma, and stared at Snooker.

“I want the world and I want it now,” I told him prophetically.

That was six years ago. The bite of my first habanero changed my life forever. I sold my trailer park and used that money to buy Snooker’s farm. I got a Ph.D. in horticulture from the Internet Agricultural University (once I learned what an Internet was), which improved my vocabulary and taught me to rip out all the rutabaga vines and replant with ‘Red Spirulina’ habaneros, the most potent pods in the world. My harvests were so bountiful and the pods so potent that soon I had the funding to buy out the Shoeless Hot Sauce Factory, which I renamed Pepper Power International (PPI on NASDAQ, if you have some spare bucks). With Bo’s help (she wasn’t pregnant then, but is now–and it’s mine, I’m pretty sure), we bought out other manufacturers, cornered the market on habanero futures, and are now living the good life in our villa in Puerto Pimiento at the pinnacle of pepperdom. I have a BMW SUV and two cell phones. Life is good. Habaneros forever.