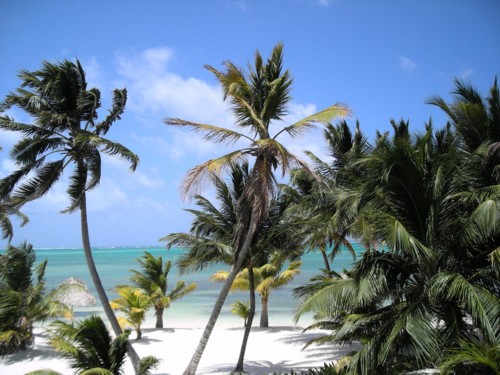 It’s tough work traveling to paradise to study chile peppers and taste exotic hot sauces, but somebody has to do it.

Over the last Christmas holiday, the over-worked editorial staff journeyed to Belize (formerly British Honduras), which is located on the Yucatán Peninsula in Central America.  Accompanying your editors were our respective spouses, Mary Jane Wilan and Jeff Gerlach.

Our headquarters for the trip was the town of San Pedro on Ambergris Caye, northeast of Belize City. Although the primary purposes of our visit were diving, snorkeling, and fishing, we soon became fascinated by the extremely hot sauces produced there which utilized habanero chiles–including habanero Five Drops, Pica Rico, Hi-Taste, and Melinda’s.

There was not a huge selection of restaurants in San Pedro, which had streets made of sand no traffic lights, so it was fortunate that we had a charcoal grill in front of our casita and a reef to fish on a short distance beyond the beach.  But I needed a tool to help with the grill and opening the many coconuts that were falling all around us.  So while Mary Jane, Nancy, and Jeff were soaking up rays on the beach, I went exploring alongside the mangroves on the other side of the caye.  My luck held and I found the perfect tool–an old machete.

So my second project was to find beer and fortunately a small store nearby had a plentiful supply of Belikan, Belize’s official brew. The third project was to scavenge for food, so I kidnapped Jeff from the beach and beers in hand, we wandered down to the dock.  We quickly found boats and fishing guides and within fifteen minutes we were hauling snapper after snapper on board!

After the guides cleaned the fish and thanks us for giving them half of the catch, we returned to the casita and enjoyed the accolades of Nancy and Mary Jane.  Hey, do we hunter/gatherers know how to take care of our women, or what?  Nancy quickly invented a recipe (see below), Jeff used my trusty machete to open some coconuts and build a charcoal fire, and soon the wonderful aroma of grilled fish was wafting among the casitas.  Soon the other vacationers wandered up looking hungry, so we fed eight people in addition to ourselves.

The next day, realizing that our readers would be interested in reading about the legendary habanero sauces, we dropped our scuba gear and fishing rods and chartered a plane to fly us to the tiny town of Melinda in the foothills of the Maya Mountains in the southern part of Belize.  After flying for about 45 minutes over the barrier reef and cayes along the coast of Belize, we landed at an air strip in the heart of the vast citrus groves which grow grapefruits, oranges, mangos, papayas, and passion fruits.  There we were met by Marie and Gerry Sharp, a genial couple who gave us a guided tour of their plantation and their Melinda’s hot sauce bottling operation. 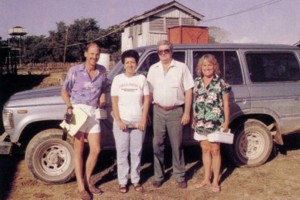 Marie Sharp began bottling Melinda’s hot sauce in 1983 after she became frustrated with the local produce markets.  A lover of habanero chiles, she had grown about a hundred plants among citrus groves on the Sharp’s 400-acre plantation.  After the initial harvest, she carried the chiles to the local market, where buyers insulted her by offering $1.00 Belize (50 cents U.S.) for a gallon of pods.

“I will not give away my peppers,” Marie vowed, and from that point on she knew that a bottled sauce was the answer to marketing the habaneros.  But there was one problem–her friends told her that the other habanero sauces were so hot that a single bottle often lasted six months or more.  Since she wanted her customers to buy more than two bottles of sauce a year, Marie began experimenting with numerous recipes in order to find one with more flavor and less heat than the competition–in fact, one which was perfect for export to a chile-hungry U.S. market.

After months of experimentation in her family kitchen, Marie developed a recipe that utilized cooked vegetables such as onions and carrots as a base, and then added pureed raw habaneros until she found the proper heat level for her Regular and Extra Hot sauces.  Thus the Marie Sharp brand is thicker and more flavorful than the other Belizean habanero sauces, which contain only chiles and vinegar.

Next it was necessary for Marie to find a dependable source for the habanero chiles, since in Belize they are grown only in limited quantities for the local market or under contract to other sauce producers.  The Sharps contacted various growers and began horticultural experimentation with the habaneros, which, like other peppers, are susceptible to fungal and viral diseases in the tropics where the rainfall can be 100 inches per year or more.

In order to standardize color in habaneros, which can vary from orange to purple at maturity only the reddest pods are selected, and those seedlings were spaced for plants three feet apart in rows four feet apart.  The habanero plants grow about one year before producing pods and reach a height of four feet or more.  They are perennial and produce pods constantly for about three years before yields are reduced.  Then the plants are removed and the rows replanted with seeds from the reddest pods available.

Currently (1988) the Sharps have about five acres of habaneros under cultivation and will soon double that as export demand for Marie Sharp’s sauce increases.  It takes about seven pounds of peppers to produce about five gallons of hot sauce, and the Melinda’s operation is currently bottling 300 to 400 cases per month, with 48 5-ounce bottles in a case.  The sauce is entirely hand-made and hand-bottled by fourteen employees overseen by Marie and her foreman Joe, who make the final taste-test on each batch.  The Melinda’s operation also produces several varieties of gourmet jams and jellies made from local citrus products.

After our enjoyable visit to the Sharp’s habanero bottling operation, we got back to the really hard work on Ambergris Caye: catching enough fish for a truly exhaustive taste-testing of Melinda’s hot sauce!  An added benefit of this expedition to our readers is that we collected several interesting Belizean recipes, below.

To preserve the distinctive flavor of the habanero peppers, we don’t cook them with the sauce but add them afterwards. 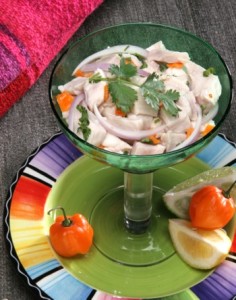 Ceviche (also spelled “seviche”) is kind of a “Latin American sushi,” raw fish “cooked” in fresh lime juice.  Because of the high acid content of the ingredients, prepare this fish recipe only in a glass dish, never in a metal one.

Combine all the ingredients and refrigerate for at least 6 hours or until the fish loses its translucency and turns opaque.
Yield: 6 servings
Heat Scale: Hot 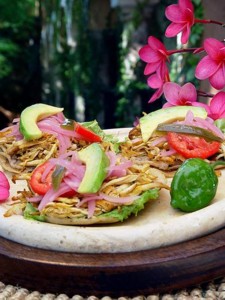 These fried, puffed-up tortillas are common throughout the Yucatán peninsula.  Although usually served as an appetizer, we enjoyed ours as a lunch entree sprinkled with liberal doses of habanero hot sauce.

Combine the masa, flour, baking powder and salt in a bowl.  Add enough water to make a soft dough.  Let the dough rest for 15 minutes.

Pinch off small amounts of the dough and roll into balls. With a rolling pin, roll the balls into small tortillas about 3 inches in diameter.  Fry the tortillas on a hot griddle on both sides until the dough is dry but not brown.

Then fry the tortillas in hot oil for a minute or until both sides are brown and crisp.  The tortillas should immediately puff-up in the oil.  Carefully remove and drain.

Okay, we confess we invented this recipe while in Belize.  It is a variation on “piri-piri,” an African dish which utilizes grilled shrimp with pepper butter.  We could not find any ground red chile the local Belizean markets, but since we never travel without it, we had it available to use with all the fresh fish we caught.  Adding coconut husks to the charcoal fire imparts an exotic, tropical flavor.

Melt the butter in a pan and add the ground red chile to it.  Marinate the fish in this mixture while the coals are getting hot.

Grill the fish, basting frequently with the chile butter, until done.

Serve with the lime wedges.
Yield: 4 to 6 servings
Heat Scale: Mild to medium

Coconuts were plentiful in Belize–in fact, Nancy almost was beaned by one while sitting on the porch.  Since they were literally falling from the trees, we tried to use them as much as we could in cooking.

In a sauce pan, saute the coconut in the butter for a couple of minutes or until it starts to brown.  Add the onion and habanero and saute until the onion is soft.

Add the rice to the mixture and continue to saute until the rice turns opaque.

Bring the coconut milk and stock to a boil, add the rice mixture, reduce the heat and simmer, covered, until the rice is done, about 30 to 40 minutes.Yield: 4 to 6 servings
Heat Scale: Hot