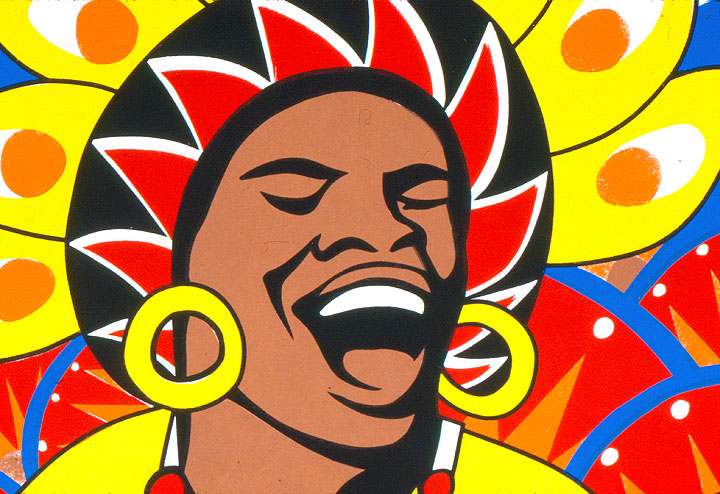 To truly appreciate the foods eaten in the Caribbean, whether at carnival time or not, one has to know a little about the history of carnival and the foods of the Caribbean.

Carnivals are a regular event in most if not all Caribbean islands, and many carnivals are a major tourist attraction. It is a time when Caribbean people living overseas return home to enjoy bacchanal. The two best known Caribbean carnivals are those held in the twin-island Republic of Trinidad & Tobago, and Jamaica. Carnival in Jamaica is relatively new compared to other islands, started when reggae singer when Byron Lee introduced it to the island in 1990. Compare that to Trinidad and Tobago where carnival can be traced back to the French aristocracy and their celebrations in the eighteenth century. In Barbados, carnival is really known as Crop Over, a throw back to the days of slavery, which celebrates the end of the cane season and another successful year. Barbados was a top producer of sugar in the slavery era.

Caribbean carnivals are an interesting mix of the African and European traditions. Traditionally they are held from December to around Ash Wednesday; however, some island’s carnivals are now held at different times. Music is an integral part of the carnival scene, with each island having their own touch, but two genres will always be heard intermingling, Jamaica’s reggae and Trinidad’s calypso and soca.

The Genesis of Caribbean Flavors

Like everything else Caribbean, the foods consumed by the different islands are similar and yet uniquely their own. The cuisines represent a mix of the different cultures that come together to make the melting pot of nationalities that is the Caribbean. The foods of the islands are a mix of African, Indian, Chinese and European cuisine, and not to be forgotten, the first inhabitants of these islands, the Tainos, Arawaks and Caribs, which means lots of hot chile peppers, color and texture.

The biggest influence on the foods of the region is that of the African slaves, so meals generally include lots of cassava, yam, bananas and jerk. The Indian laborers brought with them curry, now a popular way to prepare many different types of foods such as curry goat or curry tofu. Many after-carnival festivities will feature some curried dish, especially in Jamaica, Trinidad & Tobago, and Antigua. Since these islands are surrounded by water, the beautiful Caribbean Sea, fish and other seafoods, like crab are always plentiful. In addition, fruits and vegetables abound, featuring a variety of colors and fragrances.

As can be expected, the native foods of the various islands are plentiful during carnival, or rather after all the parades and dancing, known as “jump up” are finished. During the actual carnival activities people are too busy dancing and having fun to eat. Instead, sodas, water, coconut water and beers are the main items consumed by revelers. Spectators on the other hand can be seen in Jamaica partaking of scrumptious servings of peppery jerk chicken and jerk pork.

In Trinidad, after carnival feasting consists of pelau, Bake and Shark, and dhalpourie. So what exactly are pelau, bake and shark, and dhalpourie? Pelau is a tasty combo of rice, chicken or beef and lots of vegetables; it is normally served with condiments such as chutney or pepper sauce. Bake and shark is a fairly new addition to carnival fare but has gained tremendous popularity over the years. It is fried dough filled with shark nuggets. For the best taste, bake and shark should be eaten hot. Dhalpourie, a bread (roti) stuffed with seasoned split peas, is a gift from the country’s Indian population.

In Barbados, food plays an important role in Crop Over festivities and care is taken that many traditional foods are on hand. You are sure to see on sale delicious cou-cou, also known as polenta, a traditional pudding made from cornmeal and okra. Other fare on hand will include sandwiches made from flying fish, which is normally served with fries, as well as roti. The roti unlike that in Trinidad is normally stuffed with curried chicken, vegetables or even beef. To get a real taste of traditional Barbadian food, visitors need to go to the Bridgetown Market during Crop Over festivities.

Of course, no Caribbean meal can be consumed without some form of fruit drink, and each island has its own spin on what is the drink of choice. Fruit punch is always a favorite and is made from the fruit currently in season in the island you are visiting. In addition to fruit drink, generous servings of alcoholic beverages, especially beer and rum punch are consumed by many.

Roadside food is particularly popular during carnival as chefs set up makeshift restaurants along the carnival route or close to the bacchanal ground. In Jamaica, don’t be surprised to see men pushing carts selling hot soup and boiled corn to take the edge off your hunger. In other islands too, roadside sellers will tantalize your senses with the aroma from their pots, many selling jerk, a technique of slow cooking over a low flame now popular all over the Caribbean.

Interestingly, fast food is now almost a staple at carnival events, and in some cases dominating the type of foods eaten during the actual festivities. One Trinidadian friend, when asked what Trinis eat during carnival shouted out, “KFC!” This was not a surprising response since Trinidadians have the distinction of having been listed as the Caribbean island that consumes the most Kentucky Fried Chicken. I hope, however, that this infiltration of fast food into the carnival menu will not totally replace the colorful local dishes. 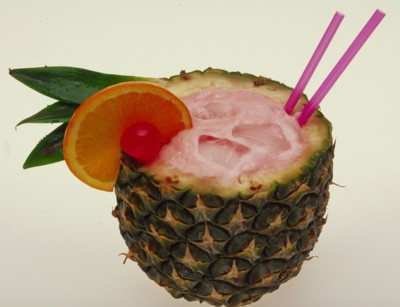 Rum punch recipes are almost identical across the Caribbean. There is a saying that is normally used when making rum punch: One sour, two sweet, three strong and four weak–there are variations but the quantities are normally the same. The punch can be garnished with a dash of nutmeg; some cooks even put a dash or two of bitters in the drink for added kick

1 cup lime juice (preferably freshly squeezed)
2 cups syrup (some islands use sugar)
3 cups rum (can mix different types of rum to taste)
4 cups orange juice (other juice can be used such as pineapple, or even water)

Mix all ingredients everything together in a blender and serve over ice.
Yield: 10 servings

Some people in Trinidad & Tobago believe that the way for a woman to catch a husband is too feed him her best callaloo. This variation features crabmeat, a common and tasty addition, and it is often served after the road marches.

Heat the butter in a large saucepan and saute the onion, celery, and garlic for 2 or 3 minutes. Add the chicken stock, coconut milk and ham and bring to a boil. Add the callaloo or spinach, the okra, thyme, black pepper, and Congo pepper.

Reduce the heat to a simmer and cook, covered, for about 50 minutes, stirring occasionally, until the callaloo is thoroughly cooked.

Whisk the soup until very smooth, or puree it in small batches in a blender. Add the crabmeat and heat thoroughly. Add the butter, swizzled over the top, and taste for salt.
Yield: 8 to 10 servings
Heat Scale: Medium
Jamaican Curry Goat

Here is a classic Jamaican dish that is much beloved at Carnival. As usual, lamb may be substituted for the goat. Note the West Indian trait of using a massala without chile powder, and then adding chiles to the curry. The dish is traditionally served with white rice, mango chutney, and grated coconut.

In a large bowl, combine the goat meat, masala, salt, cardamom, pepper, garlic, onions, tomatoes, green onions, and the chiles and mix well. Allow the meat to marinate for 1 hour.

Remove the meat from the seasonings and reserve the seasonings. Saute the meat in the butter and oil in a large skillet until lightly browned. Add the water, cover, and simmer until the goat is very tender, about 1 hour, adding more water if necessary.

The process of caramelizing the meat is an African influence which became part of the Creole culinary tradition. The process gives the pelau its dark brown color–a sure sign of a good pelau. The brown layer that forms on the bottom of the pot is called “bun-bun,” and for some people, it’s their favorite part of this meal. This recipe comes from Johnny’s Food Haven, in Port of Spain, Trinidad, and it was collected in 1992.

Heat the oil in a heavy pot or skillet. With the heat on high, add the sugar and let it caramelize until it is almost burned, stirring constantly. Add the chicken (or meat) and stir until all the pieces are covered with the sugar. Reduce the heat to medium, add the onion and garlic and cook, stirring constantly for 1 minute.

Drain the pigeon peas and add them to the pot along with the rice, water, and coconut milk. Reduce the heat and simmer, covered, for 30 minutes.

Add the remaining ingredients, stir until well mixed, cover and cook until the vegetables are tender, about 20 to 30 minutes. The pelau should be moist at the end of the cooking time.
Yield: 4 to 6 servings
Heat Scale: Medium 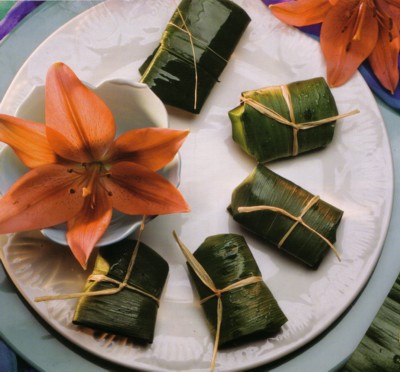 Tamales are traditionally served during the Christmas holidays and Carnival all over the New World. These pastelles (filled pastries), with their banana leaf wrap, are clearly more influenced by the Central American style than by the Mexican. This version features the old way of using the corn, rather than making a dough from cornmeal.

Brown the meat in the oil, then add the onion, green onions, garlic, tomatoes, vinegar, the optional ingredients (if desired), and the salt and pepper and cook down over medium heat for 15 minutes. The mixture should be fairly dry.

Either boil the pastelles or steam them for an hour.
Yield: 12 pastelles
Heat Scale: Varies

Here is a popular carnival dish from Barbados that is a “Caribbean polenta.” Like most cornmeal dishes, this takes some practice and a lot of stirring.  Tip: If the cou-cou is not firm when completed, it was not properly done. If it is too crumbly, then not enough water was used. If it is creamy, too much water was used. Luckily, this is easily remedied–leave over low heat and allow to dry.

Wash the okra and dice it. Place the water in a pan and set to boil; once boiling, add okra and salt to taste. Boil for 8 minutes.

Remove the water you boiled the okra in and set it aside for use later.

Pour the cornmeal in a bowl and add cold water to it to make a paste; do not make it too wet.

Place 2 cups of okra water into the pot slowly add the cornmeal mixture and diced okras into the water, stirring as you do. Place on stove, still stirring.
Yield: 8 servings as a side dish