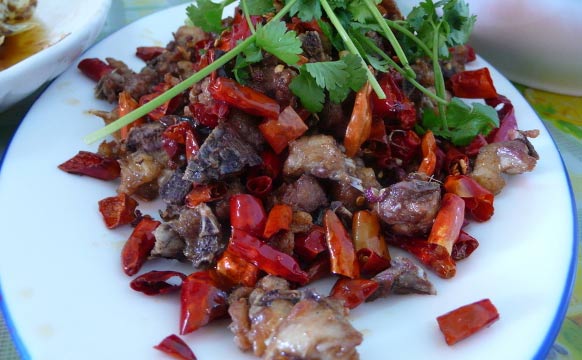 Some people just have strange interests. This winter break, I went to some of China’s best-known tourist destinations: Hainan’s Haikou and Sanya, Yunnan’s Kunming, Lijiang, and Dali, and Guangxi’s Guilin, Longji and Xingping. However, not much of my time was spent looking at the usual sites. Rather, I had my eyes on small fields, plants in the crags, and in the markets, hunting for signs of chile peppers.

Admittedly, finding chile peppers is not particularly difficult in much of China’s cooking. Sometimes, it’s rather the opposite: a dish like La Zi Ji—basically, spicy chicken—consists of chicken pieces hidden in a heap of sliced, fried chile peppers (see recipe below). Still, it is a hunt: the more ubiquitous to local cuisine that peppers are, the more difficult it becomes to find out specifics about them. Large fields looked nice, but could easily be grown from commercial seed stock. I was looking for landraces, varieties that are more specific to a locale, grown and re-grown from seed that the farmers themselves keep. These are the ones that tend to get lost when large-scale production for the market comes to dominate. When this happens, the work of generations of farmers growing and selecting plants to fit local conditions and local flavors disappears.

Stop 1: Hainan. There’s a reason this popular tourist island is called “China’s Hawaii.” In Sanya, around Dadonghai Beach, it could just as well be called “Russia’s Hawaii.” I hadn’t seen quite as many signs in Russian last year, when I lived in the (formerly Soviet) Latvia, in the Baltics. The beach was nice, though. Anyway, no chiles there, except in restaurants. The simple reason for that, though, is that Sichuan cuisine can be found anywhere in China—famously rich in peppers, whether it be the spicy chicken mentioned above or just a dish of cabbage interspersed with whole small chiles. The aim of Sichuan cuisine is not to blow the eater away, and if it is from a decent cook, there are different levels and kinds of pungency. Wuzhishan, a smaller town in the mountainous part of Hainan’s interior, was a disappointment, as I walked over fields and saw no peppers.

Haikou, the provincial capital, provided the rescue. The hostel was not really close to the sea, and the sea was not Sanya’s polished beach. There was also a sign advising not to go swimming (which Chinese people don’t often do, anyway). It was close to a local market, though. A saving grace: some peppers could be found there. Interestingly, quite a few were obviously Capsicum frutescens, like Tabasco peppers, but were mainly sold in their not-quite-ripe, green-orange state. Usually, peppers are sold either ripe—red or unripe—green, and those are other, larger kinds. The real surprise came as I departed: Hainan habanero chiles were for sale in the airport shop. Oops, so Hainan is where China’s habanero is grown? Admittedly, that’s a more recent import—or actually, a chile pepper grown for export, because worldwide demand for habanero is rising and Mexico can’t keep up.

Stop 2: Yunnan. Well known for its biological and cultural diversity, this area is not known for peppers. Kunming at least offered nice-enough temperatures, but the only red glow of peppers on the streets came as a dollop of sauce on some fried potatoes. Restaurants were the savior, yet again: I found the above-mentioned La Zi Ji spicy chicken again, along with beef slices cooked with some nice-looking, apparently dried red peppers. In a Dai restaurant (the Dai are one of the Chinese minority groups, food-wise, and are famous for boluofan—pineapple rice), I tried some kind of bartbecued fish, its innards replaced with lemongrass and other spices, pasted with a marinade that obviously included chile peppers…and yet, I could find no market  offering those peppers for sale?! Anyway, time to move on. 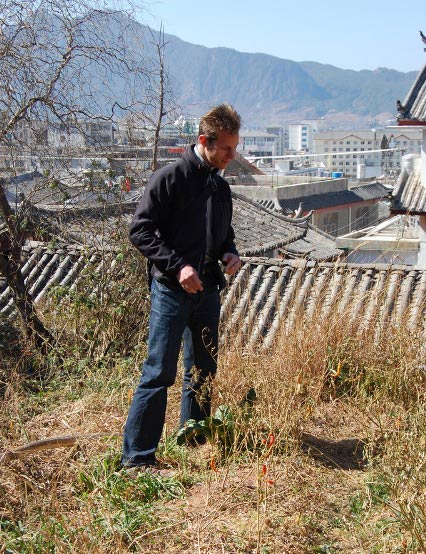 Stop 3: Lijiang. This is another tourist town, with its old city renovated and restored (and providing WiFi access in the most curious locales), surrounded by a modern Chinese town. Things got a bit more interesting here: I went up a hill, where visitors go to visit the pagoda up there, and came down with some chile peppers [see photo]. I love the way the Chinese use the smallest patches of land for growing vegetables. As in Haikou, a market was close by. Fresh peppers were green, thus not good for collecting seeds. Dried peppers were abundant—sacks of them were standing around. Sichuan pepper was close by, and interestingly, separated into two different kinds. Another “aha” came in the middle of the old town. Tourist boutiques and bars catering to visitors were everywhere, making it difficult to find the interesting thing: another such small place, this one not selling textiles or silver bijoux. Rather, a Naxi minority woman was busily working in it, chopping up red chile peppers that were placed in brine and packed into jars, to create a local chile sauce. 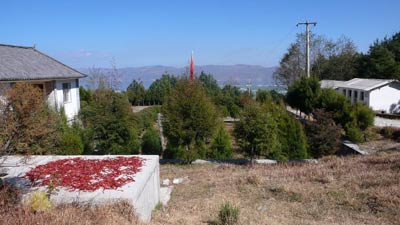 Stop 4: Dali. I must go on record as to not liking this town. It’s very much a “grow” place— every other step, another woman came up to me, asking “you wanna smoke ganja?” The hippie trail seems to be alive and well. Chile-wise, however, it turned out to be very interesting. I avoided the entrance fee for the three Pagodas there, instead went up a mountain for the view—and stumbled over chile peppers being dried on the side of the path [see photo]. Call me a thief, but I couldn’t resist slipping a few into my pocket. 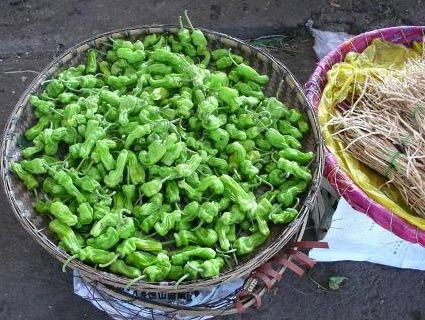 In many local restaurants you don’t get a menu, but instead choose your food from a bunch of things spilling from the entrance onto the sidewalk: fish, snails, insect larva, mushrooms, and tons of greens, with cured meats hanging above it all. You point to what you want. Some chile peppers were among the ingredients, of a variety that resembled Japan’s Ishii-Midori: thin-walled, light green, and very wrinkly. I tried them immediately. They ended up sliced and lightly stir-fried together with some type of mushroom (which are quite common in Chinese cooking, but especially in Yunnan). As it turned out, they packed a nice punch and were very tasty. Another local market, another cause of joy: I found more of the fresh, wrinkled, light green peppers, more dark green long ones. And here, I also saw dried peppers and chile powders, along with grinders for the powder [see photo]. The things that some people get excited about…

By the way, in case anyone wonders about the lack of names, there are reasons: a certain reluctance on my part to use my limited Chinese, and the usual lack of names (which makes making oneself understood even more difficult). Chile peppers are typically described by whether they are green or red, long or short, thick or thin. There are also warnings about some of them being dangerously hot. That’s it, however. 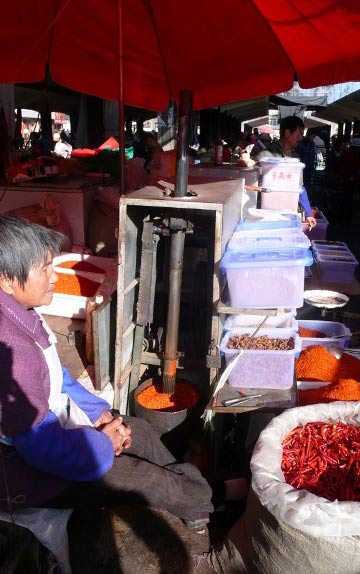 Stop 5: Guilin and surroundings. The area is best known for its limestone hills, the (Li) River that winds its way among them, and the cormorant fishers on bamboo rafts. For me, it was an essential stop, because Guilin chile sauce is a staple food. For the first few days I could only find jars of that sauce, but you can do that in other cities, too.

A side trip to Longji, where the famous terraced rice paddies are located, turned out to be more interesting: here chile pepper use was explicitly pointed out by the tour guide. “You’ll see a lot of peppers…the locals keep warm by eating ‘hot’ food.” Here I experienced the joy of a chile hunter: I didn’t have to get one of the bags of dried peppers, which might have come from somewhere else or be dried too hot to get viable seed. A towel-sized patch of land in a crag between rocks, in the middle of the village, still held the remains of a chile pepper plant, including a few pods—something more for the collection.

Stop 6: Xingping, a small town on the Li River cruise route. The limestone hill scenery shown on China’s 20 Yuan-note is to be found here. No chile peppers were found in the fields, however. Fortunately, it was market day when I arrived. One kind of dried chile pepper being sold by an elderly woman, caught my eye due to its slightly different shape from most: short, but overall larger, especially wider. It sure turned into a show for the locals: “what’s that laowai (foreigner) doing, crouching there trying to buy a handful of chile peppers?” As I walked along a road for the twentieth time, I finally noticed a raised patch of land with—guess what?—some more leftover chile plants. More peppers found their way into my bag.

Stop 7: Guilin, on the last day: For a good finish, I happened to find a market there. And yes, there were peppers: fresh, dried, pickled; whole or as powder; green or ripe. The pickled ones would get chopped up and be put in jars for use as sauce; several fresh ones went back home with me and are currently drying on my balcony. Now, I just need a patch of land, and I’d give the locals another good reason to stare at the odd foreigner…but who cares when it’s for a good, fiery reason?

Here is a quick and easy way to make a versatile chile oil that can be used in stir-fry, as a salad dressing, or as a spicy topping for all grilled meats. Sichuan pepper (fagara) are the spicy seeds from a native bush. Eliminate the Sichuan pepper if you can’t find it.

In a saucepan, warm the oil over medium heat, then add the chile pieces. Simmer for 20 minutes, stirring occasionally. Add the Sichuan pepper and allow to cook for an additional 15 minutes.  Do not let the oil get too hot or it will scorch the chiles. When the oil turns red, remove it from the heat and allow to cool. Filter out the solid material using a sieve and cheesecloth, and reserve the red oil.

This oil can be stored in a glass bottle in the refrigerator and used as an all-purpose seasoning.

Hot and slightly sweet describes this recipe.  Serve it with plain white rice. Eating the red chile pod pieces is not recommended.

In a bowl, combine the dark soy sauce, salt, sugar, cooking wine, ginger, and scallion. Mix in the cubed chicken and marinate in the refrigerator for 20 minutes.

In a wok or skillet, heat 1/4 cup of the red chile oil over high heat. When the chicken has marinated, place it into the hot oil and cook it quickly, stirring constantly. As the chicken is cooking, add the chile pepper pods and Sichuan pepper. Continue to cook until the chicken is done. Remove and place into a serving dish.

In a small skillet or heavy saucepan, heat 2 tablespoons of the chile oil and lightly fry the chopped peanuts and the sesame seeds. Remove from heat and sprinkle over the chicken before serving. Garnish with fresh cilantro. 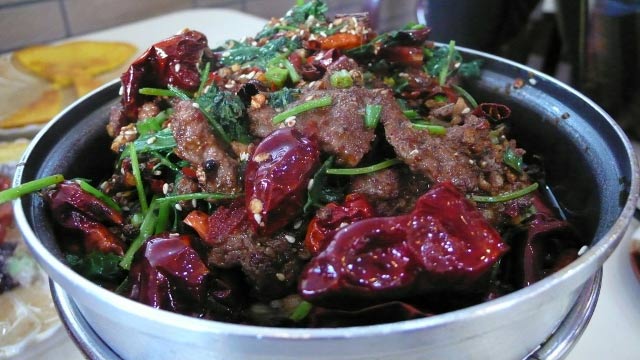 The beef in this dish is coated with egg white, and should be stir fried very quickly so it will remain tender. Eating the red chile pod pieces is not recommended.

In a bowl, mix the beef with the salt and egg white until coated.

Heat the oil in a wok or skillet and add the beef, stir frying until the pieces no longer stick together. Add the chile, ginger, and scallions and fry until the meat is cooked through. Add the sugar and soy sauce and turn until the meat is coated. Spoon out the mixture and put it into a serving bowl. Serve over cooked white rice.