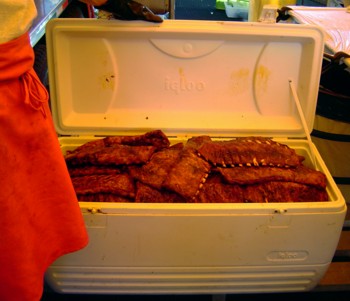 Jim Heywood, head judge of the 17th annual Best in the West Rib Cookoff, invited me and Dr. BBQ, Ray Lampe, to be judges at this outdoor event that is held on the streets of Sparks, Nevada, next to the John Ascuaga’s Nugget casino and hotel.  It was a five-day extravaganza held over the Labor Day weekend, and the weather was perfect for the 25 professional rib cookers who were not only competing, but also selling their ribs and other barbecue specialties to the public. And that was the major difference between this event and cookoffs sanctioned by any one of the numerous barbecue organizations, which are essentially events featuring talented amateurs who don’t sell their BBQ to the public.  The 25 cookers came from as far away as Chicago and New Jersey, and all had colorful displays to lure barbecue aficionados.

The public relations director of the Nugget, Maureen Stokes, has compiled a list of public consumption of the estimated 300,000 people attending the cookoff, including:

All of this food and drink required a vast infrastructure:

And there was one other overwhelming statistic: the 25 cooking teams drove over 26,500 miles to attend the cookoff!

Before the judging, Ray introduced me to the previous years’ grand prize winner, Tommy Houston of The Checkered Pig from Martinsville, Virginia, who was competing in his fourth Best of the West contest.  The first two years he didn’t place, but he took the first prize in 2004.
“Winning the contest changed my life,” he told me.  As winner, he was featured on The Food Network, and business really picked up at his restaurant, Pigs Are Us in Martinsville.  Sales of his Checkered Pig Grilling Sauce and Checkered Pig Racing Dust increased substantially, but the big deal was his new-found celebrity status.
“People recognize me all the time from the TV appearance,” he said, and I understood completely.
This year, he was serving up to 1,500 slabs of ribs a day, using three smokers.  Seventeen people were working his stand, and in addition to ribs they were serving chopped brisket, chopped pork, ham, and chicken breasts.  But could his ribs win two years in a row?  We’d soon find out.

As many of you know, my wife Mary Jane and I run the annual Scovie Awards Competition, and we have stringent rules to insure that the judging is fair and impartial, so I was curious about how it would run at the Best of the West Rib Cookoff.  Jim and the powers that be at the Nugget held a Judge’s Breakfast, where they went over the rules, and Ray and I were impressed.  There would be two sets of preliminary judges that would cut the 25 contestants in half, and then a final set of judges that would select the five top cookers.  It was a double-blind judging, using only numbers, so we had no idea whose ribs we were tasting.
The ribs were judged according to the following criteria:

We also judged barbecue sauce under the following guidelines:

The judges had 40 minutes to judge the 12 finalists in both ribs and sauce.  We were not allowed to talk to each other or make faces during the judging, just like in the Scovie Awards.  I was looking for the taste of pork that would transcend the sauce, and a sauce that wasn’t too sweet, but that had a fair amount of spicy heat.  I am proud to say that my two favorite ribs finished first and second.

Ray and I were drinking beer in the refreshment tent when Jim and Steven Steven Ascuaga, the vice president of the Nugget made the announcement of the winners on stage.  Tommy Houston, the 2004 winner, did not place in the top five.  First place for sauce and $500 went to Mike Collins of Maui Wowie BBQ of Reno, Nevada.  People’s Choice for Ribs was won by Mike Bowar of Famous Dave’s Barbeque of Plymouth, Minnesota.  Fifth Place for ribs and $500 went to B.J.’s Barbeque of Sparks, Nevada, while Fourth Place and $1,000 was awarded to Dan Kinderâ€™s Custom Meat of Concord, California.
Third Place and $2000 went to Lee Rice of Desperado’s BBQ and Rib Company of Hinckley, Ohio and Second Place and $5000 was won by Tom Ferguson of Chicago BBQ Company of Burr Ridge, Illinois.  The Grand Prize winner and $7500 was awarded to Butch Lupinetti of Butch’s Smack Your Lips BBQ of Mt. Laurel, New Jersey.  On stage, Butch asked, “How you like me now?”  Off stage, he thanked Dr. BBQ in a manner that matched the name of his company.

The Nugget took real good care of us, providing limo service from the airport, our rooms, a wonderful dinner, entertainment, and tastes of the best ribs in the nation.  Thanks to all the people at the Nugget and I can only hope that I’ll be selected as a judge for next year.
(As it turned out, I wasn’t because the Nugget decided to use only local judges!)