By Dave DeWitt and Chuck Evans

Why did Native Americans smoke chiles in the first place? Perhaps some thick-fleshed chiles such as early jalapeños were dropped near the communal fire and later, a leathery, preserved chile was the result. Since smoking is believed (along with salting) to be one of the earliest preservation methods, it would make sense that the “meaty” chiles could be smoked right along with the meat.

In the town of Delicias in northern Mexico, the old-fashioned way to smoke chiles was fairly primitive.  Red jalapeños were smoked in a large pit on a rack that was made out of wood, bamboo, or metal. Another nearby pit contained the fire and was connected to the smoking pit by an underground tunnel. The pods were placed on top of the rack where drafts of air pulled the smoke up and over the pods. A farm may also have had a smoker of a different design at the edge of the fields, and was usually a fireplace made of bricks with grates at the top and a firebox below. This smoker was for small batches.

Chipotles smoked in the Mexican manner are not always available north of Mexico. And with prices of chipotles topping $15.00 per pound when they are available, an attractive–though time-consuming–alternative is for cooks to smoke their own chiles. As chile expert Paul Bosland of New Mexico State University wrote, “It is possible to make chipotles in the backyard with a meat smoker or Weber-type barbecue with a lid. The grill should be washed to remove any meat particles because any odor in the barbecue will give the smoked chiles an undesirable flavor. Ideally, the smoker or barbecue should be new and dedicated only to smoking chiles.” The result of this type of smoking is a chipotle that more resembles the red morita than the classic tan-brown típico.

There are five keys to the quality of the homemade chipotles: the maturity and quality of the pods, the moisture in the pods, the type of wood used to create the smoke, the temperature of the smoke drying the pods, and the amount of time the fruits are exposed to the smoke and heat. Remember that smoking is an art, so variations are to be expected and even desired.

Recommended woods are fruit trees (apple, peach, apricot) or other hardwoods such as hickory, oak, and pecan. Pecan is used extensively in parts of Mexico and in southern New Mexico to flavor chipotle. Although mesquite is a smoke source in Mexico, we prefer the less greasy hardwoods. Mesquite charcoal (not briquets) is acceptable, however, especially when soaked hardwood chips are placed on top to created even more smoke. It is probable, however that the resinous mesquite smoke (from the wood, not charcoal) contributes to the tan-brown coloration of the típico variety of chipotle.

Wash all the red pods and discard any that have insect damage, bruises, or are soft and remove the stems from the pods. In a Weber-style charcoal unit, start two small fires on each side of the barbecue bowl, preferably using one of the recommended hardwoods. If you are using a meat smoker with a separate firebox, simply build the fire in the firebox. 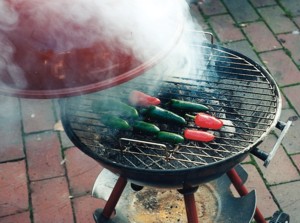 Place the pods in a single layer on the grill rack so they fit between the two fires. For quicker smoking, cut the pods in half lengthwise and remove the seeds. Keep the fires small and never directly expose the pods to the fire so they won’t dry unevenly or burn. The intention is to dry the pods slowly while flavoring them with smoke. If you are using charcoal briquets, soak hardwood chips in water before placing them on the coals so the wood will burn slower and create more smoke. The barbecue vents should be opened only partially to allow a small amount of air to enter the barbecue, thus preventing the fires from burning too fast and creating too much heat.

Check the pods, the fires, and the chips hourly and move the pods around, always keeping them away from the fires. It may take up to forty-eight hours to dry the pods completely, which means that your fire will probably burn down during the night and will need to be restoked in the morning. When dried properly, the pods will be hard, light in weight, and brown in color. After the pods have dried, remove them from the grill and let them cool. To preserve their flavor, place them in a zip-lock bag and then freeze them.  Ten pounds of fresh jalapeños yields just one pound of chipotles after the smoking process is complete. A pound of chipotles goes a long way, as a single pod is usually enough to flavor a dish.

A quick smoking technique involves drying red jalapeños (sliced lengthwise, seeds removed) in a dehydrator or in an oven with just the pilot light on. They should be desiccated but not stiff. Then smoke them for three hours over fruitwood in a traditional smoker with a separate firebox, or in the Weber-style barbecue as described above. This technique separates the drying from the smoking so you spend less time fueling the smoker.

Chuck has experimented with smoke-drying pods on a large scale with jalapeños grown near Toledo, Ohio. The large red pods had a lot of white “corking”, which is a desirable trait for jalapeños in Mexico. Thus they resembled the variety called ‘Huachinango’. He took the pods to a local catering firm that specialized in barbecue and used one of their revolving rack smokers. With hickory wood as his smoke source, he smoked the pods at 110 degrees F. for three days. He was attempting to duplicate the típico (“cigar-butt”) variety but the result was much more like the morita, with their bright red-brown leathery appearance.  The second attempt at duplicating the típico variety was in another meat-packing plant in a modern room with climate-controlled, injected smoke. The result was identical to the first try.

Then Chuck repeated the experiment a third time with a primitive smoker in a sausage-making facility. It was a small room with racks set on the ground and smoke that continuously circulated. He left the pods in the room for a week, and the chipotles were closer to the desired tan-brown color, but the pods still had too much moisture in them. He concluded that the raw red jalapeños contained extra moisture to begin with.

Obviously, the Mexicans have perfected the típico technique, while we Americans are struggling to duplicate it with more modern equipment. There is a delicate balance of the pit temperature, the amount of smoke, the type of smoke, and the length of time that produces the perfect chipotle. Perhaps we shall be forced to dig smoking pits in our backyards and begin growing mesquite trees.