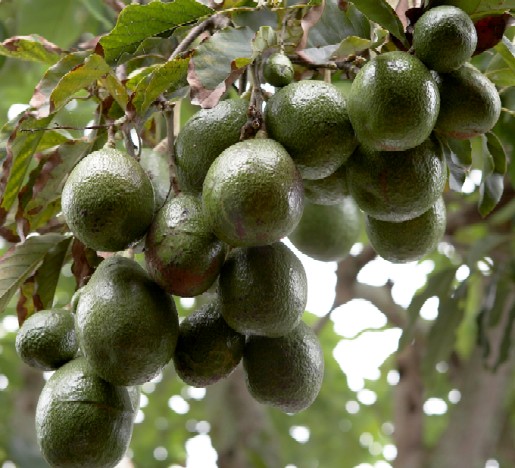 Don’t believe all those people who tell you avocado is a vegetable, because it’s not.  It’s a fruit just like mangos, pears, tomatoes, chiles, and apples.  It just happens to pair well with some vegetables like lettuce, especially in salads, so that’s why people think it’s a veggie.  It’s one of my favorite fruits, along with mangos and peaches.

No, I’m not referring to the ancient Greek philosopher Testiclies who wrote the famous treatise “On Balls.”  I’m referencing the Aztec word for avocado, ahuacatl, that translates as “testicle,” an indication of the shape of the fruit.  They used the avocado as a sex stimulant!  In the pre-Incan city of Chanchan, archaeologists have unearthed a large water jar, dated around 900 A.D., in the shape of an avocado.

The prudish Spanish conquistadors banned that word and used instead a similar-sounding one, abogado, which means “lawyer.”  Go figure.  Then the French and Germans discovered the fruit and they continued the mistranslation with poire d’avocat and avokatbirne, both meaning “lawyer’s pears.”  For Americans, George Washington tasted them on a trip to Barbados and called them, mysteriously, “agovado.”

The Spanish conquistadors also discovered a unique use for the avocado seed. The seed yields a milky liquid that becomes red when exposed to air. The Spaniards found they could use this reddish brown or even blackish indelible liquid as ink to be used on documents. Some of these documents are still in existence today.  Fernandez de Oviedo, historian to the conquistadores, wrote in 1526 about avocados he saw along the north coast of Colombia: “In the center of the fruit is a seed like a peeled chestnut. And between this and the rind is the part which is eaten, which is abundant, and is a paste similar to butter and of very good taste.” 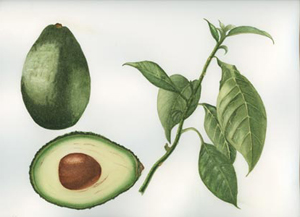 W. Hughes, physician to King Charles II of England, visiting Jamaica in 1672, wrote that the avocado was: “One of the most rare and pleasant fruits of the island. It nourisheth and strengtheneth the body, corroborating the spirits and procuring lust exceedingly.”  In 1833, Judge Henry Perrine planted the first avocado tree in Florida, while in 1871 in California, the first successful introduction of avocado trees was planted by Judge R. B. Ord of Santa Barbara, who secured the trees from Mexico in 1871.  The oldest living tree is found on the University of California, Berkeley campus and was planted in 1879.

In 1895, Charles Delmonico and Ranhofer introduced New York to the “alligator pear” or what later became known as the ‘Hass’ avocado, which had been newly imported from South America.  Ranhofer had known of the avocado–he mentions the avocado in his book, The Epicurean, which he published the previous year–but until 1895 he had been unable to secure a supply of the buttery fruit.  In 1911 Frederick O. Popenoe, owner of the West Indian Gardens of Altadena, California, sent Carl Schmidt to Mexico to search for avocados of outstanding quality and to bring them back.  Schmidt located what turned out to be the ‘Fuerte’ as a dooryard tree in Atlixco, Mexico. Only one of the trees he brought back survived the great freeze of 1913 in California. This surviving tree was given the name ‘Fuerte’, Spanish for “vigorous”  or “strong.”   The ‘Fuerte’ variety created California’s avocado industry.

All ‘Hass’ avocado trees are related to a single “mother tree” that was planted by Rudolph Hass in 1926 in La Habra Heights, California.  Hass patented the resulting tree in 1935–the first U.S. patent on a tree–and made a contract with Whittier nurseryman Harold Brokaw to grow and distribute the trees produced by the seeds of the “mother tree.”  Hass received 25 percent of the money, but no one respected the patent and Hass made a profit of less than $5,000.  The U.S. avocado industry today makes over $1 billion annually from the heavy-bearing, high quality fruit of Hass’s cultivar, and it accounts for around 80%, worldwide, of all avocados grown today.  The ‘Hass’ variety produces fruit year-round, unlike the ‘Fuerte’, and has more and larger fruit, with a longer shelf life and a richer flavor.

–One-fifth of a medium avocado, or about one ounce, has 50 calories and contributes nearly 20 beneficial nutrients to the diet.
–Avocados contain about 20 vitamins, minerals and phytonutrients, including 4% of the recommended Daily Value (DV) for vitamin E, 4% vitamin C, 8% folate, 4% fiber, 2% iron, 4% potassium, with 81 micrograms of lutein and 19 micrograms of beta-carotene.
–Avocados, due to their mono and polyunsaturated fat content, are a healthy substitution for foods rich in saturated fat.
–Avocados can help consumers meet the dietary guidelines of the American Heart Association, which are to eat a diet that is low to moderate in fat. The fats should be primarily unsaturated and low in saturated fat and cholesterol. The avocado is virtually the only fruit that has monounsaturated fat.
–Avocados are cholesterol- and sodium-free, and more than 50 percent of the fruit’s fat content comes from monounsaturated fats.

Since avocados are shipped in their unripened state, they remain hard for a long time.  To speed up the ripening process you need ethylene, nature’s natural ripening hormone.  Simply put the hard avocados in a paper bag with a ripe banana (or simply a discarded peel), apple, or orange and the testicle tree fruits will ripen twice as fast.  After they turn ripe, if you can’t use them up fast enough in the recipes below, mash them up or puree them with a tablespoon of lemon or lime juice for two avocados, double-bag and freeze the mixture.

Today Americans devour twice as many avocados as they did a decade ago, approximately three and a half pounds of them per person.  Fresh avocados on sandwiches and toast or substituted as a spread in place of many other popular foods reduces your dietary intake of calories, fat, saturated fat, sodium and cholesterol.  Naturally, the first thing we think of making with them is a salad, and indeed they are delicious with fresh garden tomatoes, some chives, and an Italian dressing.   But you can only eat so many salads, so I have added some other surprising recipes—all spiced up, of course. 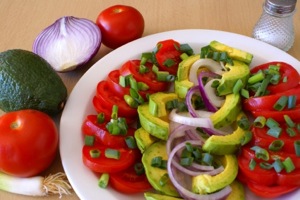 This is my favorite summer salad.  Most of it comes from my garden, with the exception of the avocados, which of course are tropical trees that cannot survive freezes.  The concept that every salad must contain a leafy green such as lettuce or spinach has gone the way of the passenger pigeon and I prefer the more intense flavor of the fruits without the leaves.  Serve this with your favorite dressing; I still prefer variations on Italian, but bleu cheese dressings also work well.

Combine all the ingredients in a large bowl, mix well, and serve.  Allow the guests to select their own dressing. 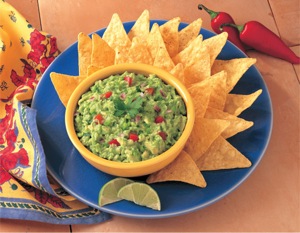 Named from ahuacatl “testicle” and mole, meaning “mixture,” this pulpy sauce moved from strictly Mexican use into America around 1900 and slowly increased in popularity as the avocado became more available in American supermarkets.  It really took off after the introduction of corn chips in the 1960s and now is found pre-made in various packages everywhere, but many of them are bland and lack the full flavor of guacamole made from scratch.  This version is traditionally made with a molcajete y mano, a large Mexican mortar and pestle carved from volcanic rock. If you don’t have a molcajete y mano, you can smash the avocados with a fork or potato masher.

Peel and pit the avocados, then grind them in the molcajete. Add the garlic, chiles and cilantro and keep grinding. Gently squeeze in the lime juice and add salt to taste. Transfer to a bowl and serve with fresh Mexican tortilla chips.

To make the tortilla chips, heat the oil in a large frying pan until it reaches 350 degrees F.  Fry the tortilla wedges in batches, cooking each for about 3 minutes, or until they become a nice shade of golden brown. Sprinkle the chips with salt then keep them warm in a 200 degree F. oven.

European sailors in the 1700s called this “midshipman’s butter” because they liked to spread it on hardtack biscuits.  It’s a great vegan substitute for mayonnaise because it has no eggs in it, and you can also use it as a sandwich spread, a condiment for grilled meats, or as a dip for veggies or chips.

Combine all the ingredients in a small food processor and blend until ingredients form a paste. 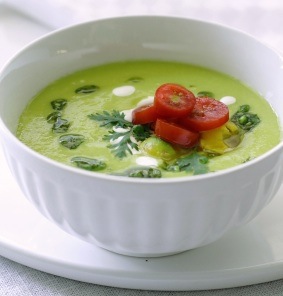 This summer soup is delicious cold or hot. While this recipe makes four servings, each just under one cup, you may want to double it, either to accommodate more people or larger appetites.

In a large sauce pan, heat the chicken broth until hot, not boiling. Set aside.

Peel the avocado and remove the seed. Cut into several pieces, place in the food processor or blender, and purée. Turn off the blender and pour in the whipping cream, followed by the hot chicken broth, cumin, salt, white pepper, sherry, hot sauce, and lemon juice. Pulse a few times, just until mixture is blended. Taste and add more salt and pepper, if desired.

Serve immediately, or chill for at least two hours and serve.