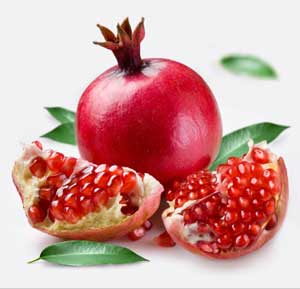 Pomegranate is the fruit of legend. The Greeks gave it a featured role in the myth of Persephone, who was compelled to spend half of every year in the underworld because of the six pomegranate seeds she ate, thus creating the seasons. An Egyptian papyrus over three thousand years old equated pomegranates to breasts, according to Adam Leith Gollner’s excellent book The Fruit Hunters. In another amazing book about plants and their relationship to human culture, The Botany of Desire, author Michael Pollan observed that it’s much more likely to have been a pomegranate Eve handed to Adam on that fateful day in the Garden of Eden.

Eating a pomegranate is a trip. It is the most beautifully designed, labor-intensive edible object I’ve ever seen. Opening a pomegranate is a somewhat daunting prospect; you don’t peel it like an apple. It requires much more force than peeling an orange or a banana, and the leathery husk doesn’t come off in long strips, but must be pried loose with great care, because in some areas it is thick, and in others it’s just a thin membrane between you and the juicy red kernels within. If you miscalculate the skin’s thickness in any spot, you risk unleashing a jet of intense red juice that will inevitably land on whichever piece of your clothing will stain most easily. Oh, but it’s worth the risk. 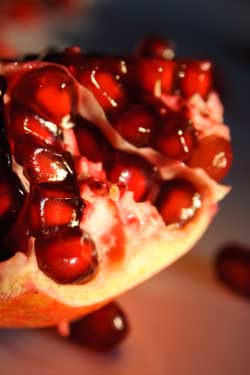 The globe of a pomegranate is a treasure chest filled with fruit rubies. Each of the hundreds of seeds is encased in its own translucent capsule filled with sweet, tangy (did I mention staining?) juice. The seeds are packed together in a mystifying structure that always makes me think of a geodesic dome. The fruit is divided into segments by a thin, papery golden membrane; removing the seeds with their juicy contents intact requires patience and a deft touch.

My first experience with pomegranates was as a kid growing up in southern California. It was an autumn tradition that at least one fresh pomegranate would make it home in my mom’s grocery bag. I’d spend the better part of an afternoon disassembling the fruit, then admiring, stacking, counting, and finally consuming the juicy red pearls. I didn’t realize then that everyone in the country didn’t also enjoy this pastime; in fact, Gollner noted that until 2006, only 5 percent of Americans had ever tasted a pomegranate.

That number is growing exponentially. With the advent of “boutique” bottled products like Pom Wonderful juices, pomegranate is becoming mainstream. Pomegranates contain the same antioxidants and cancer-fighting flavanoids found in blueberries and cherries. You can buy pomegranate concentrate, pomegranate capsules as a dietary supplement, even a luscious pomegranate liqueur produced by PAMA. According www.pamaliqueur.com, this spirit is a blend of “pomegranate juice, vodka, and a touch of imported tequila.” Their registered tagline modestly describes the product as “Pomegranate Perfected.” While I’m not sure I’d agree that a pomegranate in its natural glory could be made any more perfect, the liqueur is certainly incredible.

The following recipes explore pomegranate as an ingredient, one that holds its own when combined with red chile. The rich, intense flavor of pomegranate lends an exotic feel, a beautiful ruby cast, and memorable flavor to any dish. After all, Adam found it irresistible…

This recipe features PAMA Pomegranate Liqueur in a vinaigrette that could be used on a variety of salads. For more recipes, visit www.pamaliqueur.com.

Combine all vinaigrette ingredients in a small bowl and whisk together.

Put the shrimp, jalapeño, shallot, tomato, green onion, and cilantro into a wide shallow bowl. Add the vinaigrette and toss. Marinate in the refrigerator for 30 minutes or up to 2 hours.

Meanwhile, make the wonton chips. Pour oil into a stir-fry pan to a depth of 1 ½ inches and heat over medium-high heat to 350 degrees F. While the oil is heating, line a plate with two layers of paper towels.

Cut the wonton skins into triangles. Working in batches, fry the skins, turning occasionally, until crisp and golden brown (about one minute per batch). Drain on paper towels.

Serve the salsa with the chips on the side. 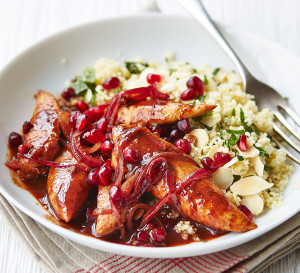 There are many versions of this dish, which has its origins in the Middle East. Increase the cayenne amount to 1/2 teaspoon for a more fiery dish. Fresh pomegranate juice gives the sauce a rich, fruity flavor.

Rinse the chicken and divide it into four pieces. Flatten the breasts by covering them with plastic wrap and pounding until they are about 1/2 an inch thick.

Chop the walnuts finely and combine with the flour in a shallow dish, like a pie plate. Put the eggs into a separate dish.

Salt and pepper the chicken breasts, then dip each piece into the beaten egg. Immediately dredge in the walnut/flour mixture, pressing the coating onto the chicken.

Heat the oil in a skillet. Add the onion and sauté until golden. Remove the cooked onions and set aside.

Add the chicken stock and pomegranate juice to the skillet, along with the cooked onion, currants and cayenne pepper. Cook over medium heat for about 5 minutes, then add the mint and cornstarch. When the sauce has thickened slightly, taste and adjust the seasonings.

Pour over the chicken breasts and serve with a side of couscous and cucumber/yogurt salad. 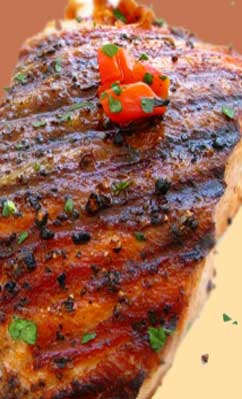 Here’s another option for cooking with PAMA Pomegranate Liqueur. The recipe also calls for pomegranate molasses (also called pomegranate syrup), which can be purchased online at The Spice House.

Mix all ingredients except the salmon in a small saucepan over medium heat and stir until the sugar dissolves. When the mixture boils, reduce heat and simmer for 20 minutes, stirring often. Remove from heat and cool completely.

Prepare a grill or broiler: set on high. If using a grill, brush a rack with oil. Brush the flesh side of the salmon with oil, sprinkle with salt and pepper. Place the filet, skin side down, on the grill or on a rack under the broiler about 4 inches from the heat. Grill for five minutes. Brush with the barbecue sauce, and cook an additional 2-3 minutes.

Serve the salmon drizzled with the barbecue sauce as desired.

This recipe is courtesy of Saad Fayed. A restaurateur with an avid interest in preparing Middle Eastern cuisine, he has lived and traveled in many Middle Eastern countries, experiencing the flavors and specialties of each region. Saad is currently writing a cookbook that features his family’s favorite dishes. Pomegranate syrup (also known as pomegranate molasses) can be purchased online from The Spice House. 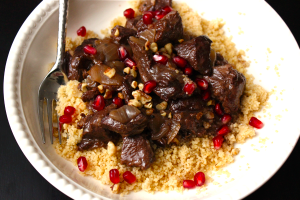 In a large frying pan, sauté onions in olive oil. Once onions begin to brown add lamb cubes. Simmer on low and allow to cook for about 25 minutes.

In the meantime, prepare pomegranate sauce by combining the chicken stock, pomegranate syrup, walnuts, and sugar in saucepan over low heat. Allow to simmer for 10 minutes.

Once lamb is done simmering, drain fat and juices. Add spices and mix well. Allow to simmer for 5 minutes.

Add pomegranate sauce and cook over low heat for about 10 minutes. 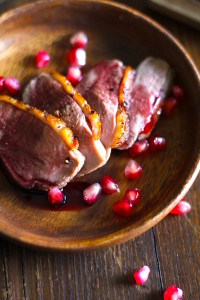 The pomegranate component in this dish is provided by another popular product: Pom brand bottled pomegranate juice. This can be made with chicken breasts instead, but be sure to roast them until cooked through. Recipe courtesy of Selma Brown Morrow of Bon Appétit.

For the sauce:
Stir sugar and 1/2 cup water in heavy large saucepan over medium heat until sugar dissolves. Increase heat; boil until syrup is deep amber color, swirling pan occasionally, about 8 minutes. Add juice, broth, and California chiles. Boil until sauce is reduced to 1 1/2 cups, about 25 minutes. Remove from heat; cool. Puree in tightly covered blender until smooth, about 2 minutes. Transfer to bowl. Whisk in adobo sauce, vinegar, and cumin. Season to taste with generous amount of coarse salt and pepper. DO AHEAD: Can be made 1 week ahead. Cover and chill. Rewarm over low heat before using.

Preheat oven to 400°F. Score skin of duck (don’t cut into flesh) with 5 cuts in 1 direction; repeat in opposite direction, making diamond pattern. Sprinkle duck all over with coarse salt, pepper, and ground coriander. Place 2 large ovenproof skillets over medium-high heat. Add duck, skin side down, to skillets, dividing equally. Cook duck until skin is crisp and deep brown, about 7 minutes. Turn duck over; cook 1 minute. Pour off fat. Transfer skillets to oven. Roast duck until cooked to medium-rare, about 5 minutes.

*Dried, smoked jalapeños in a spicy tomato sauce called adobo; available at some supermarkets and at specialty foods stores and Latin markets. 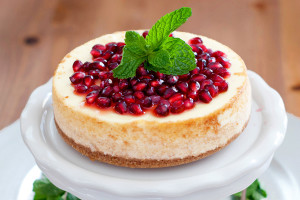 Cool the heat from your chile-spiked dish with a slice of this rich cheesecake. Fresh pomegranates in the topping make this a beautiful, unforgettable dessert. Recipe courtesy of Pomegranates.org, where you’ll find many more recipes featuring pomegranates.

Pre-heat oven to 350 degrees F. In a 9-1/2 inch springform pan, place crust ingredients and with fingers, blend well. Press mixture evenly over bottom and 3/4 inch up side of pan.

In a large bowl with an electric mixer beat filling ingredients on high speed until light and fluffy, about 5 minutes. Pour filling into crust and bake in middle of oven 20 minutes, or until cheesecake is just set in center. (Cake will continue to set as it cools.) Transfer cake in pan to a rack and cool, about 3 hours.

Place juice in a 1-cup liquid measure and add water. Sprinkle gelatin over pomegranate juice and let stand 1 minute to soften gelatin. Remove the seeds from the pomegranates.

Transfer gelatin mixture to a small saucepan. Add sugar and cook over moderate heat, stirring, until sugar is dissolved. Pour mixture into a bowl and set bowl in a larger bowl of ice and cold water, stirring mixture gently until it is cold and slightly thickened but not set. Stir in pomegranate seeds and spoon topping onto chilled cheesecake. Chill cake until topping is set, about 1 hour. Remove side of pan and serve chilled.

“If You See a Blue Elephant….”

“If You See a Blue Elephant….”