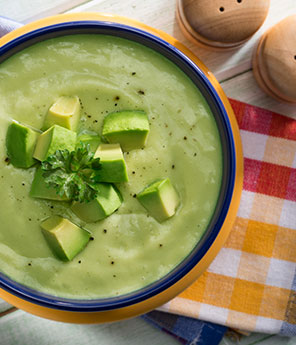 By José C. Marmolejo
Mexico has exported avocados since 1980, but not due north. Europe was its first international destination. Ten years later Japan and Canada became hooked on this wonderful Mexican fruit. It only took 27 years for Mexican avocado exports to break into every state in the U.S. market year round.

In the last decade, Mexico has seen exponential growth in the number of avocado producers, packers and exporters. Moreover, land devoted to the crop has expanded to meet demand. Most significantly, 82% of the producers are small farms. These are properties with less than 40 acres (according to the Avocado Producers, Packers and Exporters Association of Mexico). That economic impact benefits many families and isn’t concentrated in a few big farmers. These numbers continue improving. Therefore, so does social value of this crop. What’s more, 84% of the 1 million tons of avocado exports end in the U.S.

What’s behind this phenomenon? Fertile soil, warm climate, and proximity to the U.S. border added to a desirable fruit flavor (with addictive properties when combined with chiles), for starters. The state of Michoacan is the preeminent producer with the state of Jalisco coming second. But the most notorious characteristic of avocados is that they seem to have been created to be traded. The tree produces a ripening inhibitor; once the fruit is harvested, then it ripens. This permits harvesting “just in time” by the size you need, with all the avocados beginning to mature uniformly on the day you need to ship. It’s almost like a factory!

Also, lots of factors stimulate avocado in the U.S. as well. There’s an ambitious marketing strategy that includes digital marketing, famous chefs and celebrities hired as spokespeople, marketing alliances, and strong supermarket presence. But we must not count out the 30-second spots in the 2016 and 2017 editions of the Super Bowl, also. As a result, the U.S. yearly per capita consumption has raised from 3 to 5 lbs. in only 5 years. All of the above has had an impact on avocado prices in Mexico too. As producers increase volume and quality for desired exports, the local prices in Mexico reflect the higher demand and higher quality avocados are now available. But let’s take a break. Writing about food is paramount to watch cooking shows on TV. You always end hungry. Did you know it takes the same amount of time to prepare a couple of guacamole tostadas than a couple cups of coffee? I’ll do the first. You can do the latter. Writing about food has its rewards…

Now that we are into eating avocados, I remember during my school years in the U.S., I had some friends from New York that liked avocados and wanted to show off their eating avocados skills. They washed the fruit and began to eat them, biting them directly over the skin! Not even salt added! It’s true that the skin is edible but the texture and bitterness kills the subtle flavor of the pulp. And there is no real pleasure in that. It’s also true that there are native varieties in Mexico with very thin and black soft skin that you can squeeze the seed out of with your fingers and put all the rest in a warm tortilla with salt. Thus you have an instant avocado taco with the benefit of a free natural vermifuge contained in the skin (according to Mexican traditional medicine).

However, the most sought after variety worldwide is Haas. It was developed and patented in 1935 by Rudolph Haas, a postman from Los Angeles, turned enthusiast horticulturist. It was the first patent granted to a plant. However, after 17 years, the patent expired and Mr. Haas didn’t see much profit for his efforts. The variety made its way to the State of Michoacan in Mexico. Through grafting to native trees, it adapted very well and produced excellent fruit year round. But aside from adaptation, the thick skin sui generis of Haas is the best shield for packing and shipping. Also, it extends the avocado’s shelf life. We should also note that the variety of sizes in the trees allows for specific packing for supermarkets or restaurants.

We will leave out the details of making an Avocado Cappuccino because fads are fads, but we cannot leave out the term “Avocado Hand.” Defined as a hand injury result of a failed attempt to cut into an avocado, this is far more serious than eating an avocado with the skin on it! It’s now becoming more frequent in emergency rooms to treat people who have stabbed their hand after fighting an avocado with a knife. Meryl Streep did not think much about showing her bandaged hand in public and raising awareness about it. We don’t want to scare you and we don’t want you to hurt yourself, so take a moment and enjoy Jamie Oliver’s video on the subject: 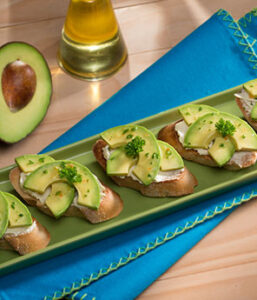 Instructions:
1. In a pie plate, gently toss the avocado and tomato with dressing (avocado and tomato can be prepared up to six hours before serving).
2. At serving time, spread about 2 teaspoons of the cheese on each toast slice.
3. On each toast, place an avocado slice on one side and diced tomato on the other. Repeat with remaining toast, avocado and tomato.
4. Sprinkle with chopped cilantro, chives, green onion and ground pepper, if desired 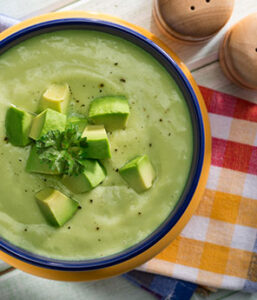 Instructions:
1. In a blender, combine one of the avocados, one can of the broth, the pepper, salt, and hot pepper sauce. Process the combination until smooth and creamy; then transfer to a medium bowl.
2. Repeat with the remaining avocado and broth; stir into the bowl.
3. Place a piece of plastic wrap on the surface of the soup. Refrigerate it until very cold.
4. To serve, ladle the soup into bowls, dividing evenly.
5. Garnish each portion with a spoonful of cream and a sprinkle of tomatoes and parsley. 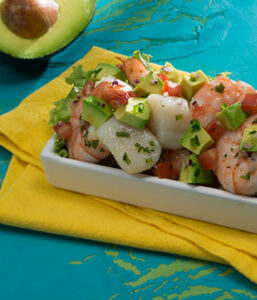 Instructions
1. Combine lime juice, shrimp, scallops and onion in a medium glass bowl.
2. Toss to combine, cover with plastic wrap, and place the mix in the refrigerator to marinate for three hours or until the shrimp and scallops are white in color.
3. Drain the liquid from the shrimp-scallop-onion mixture, but do not rinse.
4. In a large glass bowl whisk together the orange juice, olive oil, and salt.
5. Add the avocado, tomato, cilantro, jalapeño pepper and marinated seafood.
6. Toss gently to combine, and serve immediately