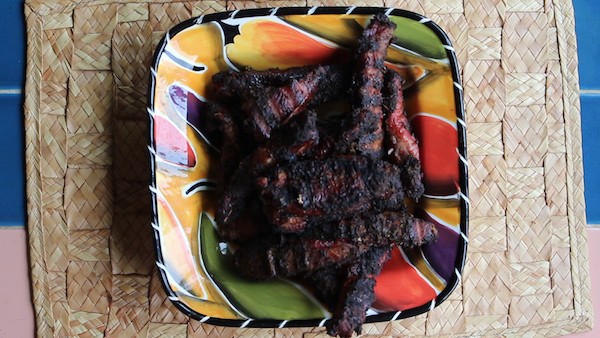 The Jamaican jerk cooks use a technique of cooking best described as “smoke-grilling.” it combines the direct heat of grilling with smoke produced by fresh pimento leaves and branches. While grilling, the meat is often covered with a piece of corrugated aluminum to keep the heat and smoke contained. This method can be approximated by using a weber-type barbecue with a round drip pan filled with water in the center of the coals to catch drippings and prevent flare-ups. Although marinated pork can be smoked with cooler smoke in an indirect-heat smoker, the texture will not be be the same as with smoke-grilling, and the traditional crust will not form. We prefer to smoke-grill over wood rather than charcoal, as the flavor is far superior. Note: if you are using a smoker, smoke the meat for 2 hours at 300 degrees F., turning once after one hour.

Variations on jamaican jerk sauces and marinades range from the early, simple pastes of three or four ingredients to the more modern and rather complicated concotions with as many twenty-one spices, herbs, and vegetables. By varying the amount of vegetable oil and lime juice added, the cook can change the consistency from a paste to a sauce. Traditionally, it is used with pork, chicken, or fish. 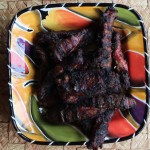