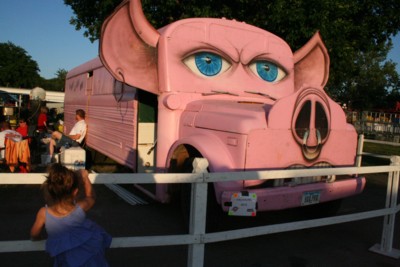 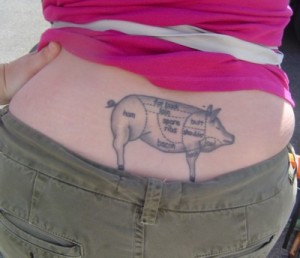 It was supposed to be a simple assignment. . . four staffers from Fiery Foods and BBQ magazine would fly to Des Moines, Iowa and compete at the twentieth annual Great Pork BarbeQlossal.

Traveling across the country to the world pork competition and expo were publisher Dave DeWitt, the “Pope of Peppers”; editor Gwyneth Doland, author of Mole!; Dr. BBQ (Ray Lampe), a barbecue champion and author of many barbecue cookbooks, from Lakeland, Florida; and myself, barbecue expert with a Ph.B. The eclectic team of barbecue aficionados–named the Beer:30 BBQ Team–had never competed together and would be vying for over $37,000 in prize money and awards.

Logistically it would be difficult to coordinate supplies and equipment from half-way across the country. Difficult but not impossible thanks to our Des Moines-based publisher Pioneer Communications and Mike Tucker from Hawgeyes BBQ in nearby Ankeny. Mike provided a Horizon cooker for Dr. BBQ’s whole hog and a ProQ vertical smoker for my ribs. Dr. BBQ came equipped with a Big Green Egg for Gwyneth’s and Dave’s pork entries.

However the mid-West weather wasn’t figured into the equation. Dave and Gwyneth were flying into Chicago’s O’Hare International from Albuquerque. I was flying into O’Hare from Cape Cod. From the Windy City the destination was Des Moines aboard an American Eagle Embracer Regional Jet. But Mother Nature got into a bad mood late in Thursday afternoon and decided to kick up a weather front featuring hail, torrential rain and tornados. Flights across the mid-West were cancelled and Skokie’s Holiday Inn–a half-hour’s drive from the airport–became our home for the night.

Surprisingly, the Holiday Inn was also host to a restaurant featuring foods of India. An unexpected treat!

Fortunately the weather cleared for our 6:30 a.m. flight to Des Moines where we picked up our luggage that made the earlier flight, got into a rental car and headed out to get our home for the weekend, an RV. Our mini-convoy headed to the Iowa State Fairgrounds to meet Dr. BBQ who had driven in from Louisville.

After getting our site and smokers arranged Dave & Gwyneth headed out to check Gwyneth into the Quality Inn and pick up necessary provisions that didn’t make carry-on luggage from across the country. 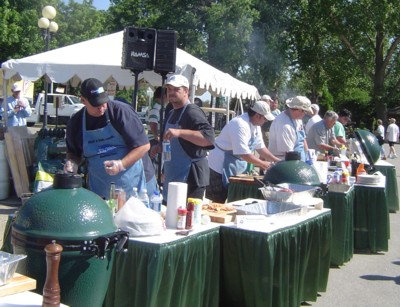 Stephanie Wilson of The Slabs and office manager for the Kansas City Barbeque Society was host to a birthday party for Dr. BBQ and a great supper for our team Friday evening. Then it was off to the cooks’ meeting to learn the rules for competing at the BarbeQlossal. After the cooks’ meeting Dr. BBQ’s golf cart became our preferred method of carrying our meats from the refrigerated trailer to our site. We loaded on the good doctor’s whole hog, Gwyneth’s two butts, my four slabs of ribs and Dave’s pork loins and headed off into the setting sun. 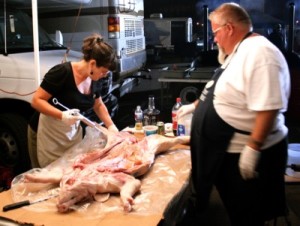 Gwyneth, with her insatiable quest for pork knowledge, jumped at Dr. BBQ’s invitation to help prepare the pig. Rib bones were cut, primal cuts were injected with the doctor’s secret recipe and the hog was ready for the cooker. As with any hog destined for BBQ history, ours was duly named “Gwyneth.”

As Dr. BBQ tended to a few other duties around the fairground during the evening, the hog continued cooking. Gwyneth prepped her butts and I readied the ribs by peeling off the silverskin and generously basting the ribs with mustard and dry rub getting them ready for a little rest in the RV’s refrigerator overnight. The plan was the ribs would go on the ProQ cooker around 6 a.m. to be ready for the 1:30 p.m. turn-in. At least that was the plan.

“Butts are simple,” Dr. BBQ explained to Gwyneth who had never cooked in a competition before. “Cook it until you think it’s done, and then cook it for another three hours.”

After visiting with some of the other teams, it was time to call it a night. Gwyneth headed off to the hotel; Ray went off to his van to catch a couple of hours sleep before returning to check on the hog’s progress throughout the night. Dave and I crashed in the RV. One thing we had forgotten was it gets cool in Des Moines at night. There were no linens, pillows or blankets in the RV and we froze our asses off. 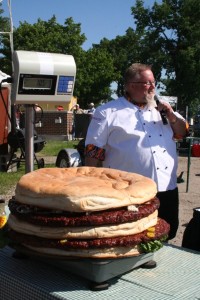 Saturday morning came early but not quite early enough. The plan was for my ribs to go on at 6 a.m. I rolled out of the upper berth around 7 a.m., a couple of hours after I had wanted to so it was a scramble to get the fire started and the ribs cooking. Attempting to adjust for the difference I thought a fire a little hotter than usual would be needed so I cranked the heat up to about 300 degrees F. Not exactly the best idea as the final scores would show.

As Ray’s hog cooked steadily and Gwyneth’s butts were happy in the Big Green Egg, Dave started to get his pork loins ready. With everything cooking there was little to do but visit with teams and see Mike of Hawgeyes prepare the world’s largest pork burger in an attempt to beat last year’s record burger. Dr. BBQ, Mike and a handful of assistants cooked two massive 18-inch round and 3-inch thick pork burgers, garnished them with hot sauce, hot peppers, Maytag blue cheese and a variety of condiments before cutting the burger into serving-size pieces for the waiting crowd of on-lookers. The finished weight was an impressive 70 1/2 pounds!

After assisting Mike and Ray with the pork burger, it was time for Dave to get his loins on the Big Green Egg and time for Dr. BBQ to await the Pig Police before preparing his whole hog turn-in box. My ribs would follow to the judges, then Gwyneth’s butt and finally Dave’s loin.

After providing samples to scores of visitors, there was little left to do but break down the site, reload Dr. BBQ’s van and get ready for the awards ceremony. Regrettably, Dr. BBQ had to leave before the awards as he needed to be in Chicago for a radio interview the next day. It was unfortunate as Dr. BBQ was the only member of our team to place in the money taking a 10th place finish for his whole hog. My ribs finished an unimpressive 58th out of the 80 teams while Dave’s loins finished at 55th among the 79 loin entries. Much to the team’s pleasure and Gwyneth’s amazement, her pork shoulder finished 19th in a field of 79 entries. 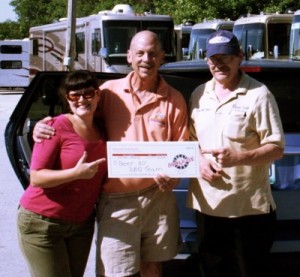 Then it was off to the Quality Inn for much-needed showers and an evening of fellowship and relaxation with Pioneer Communications CEO Jim Slife and his wife, Polly Clark, at one of Des Moines better restaurants, Jesse’s Embers. Jim graciously offered a toast to the team with a round of Iowa’s own Templeton Rye Whisky. Jim and Polly were also instrumental in providing a lot of supplies for the team.

The Beer:30 BBQ Team was now in the annals of BarbeQlossal history: a team of competitors from across the country, cooking on borrowed equipment and each trying to have his or her recipe take the $10,000 top prize. Although we didn’t walk away with the grand prize that went to Craig and Patty Kidwell’s “Boys of BBQ & Patty,” out of Odessa, MO, the team did better than any of us expected, finishing 31st overall. Great Pork BarbeQlossal 2007 WinnersGrand Champion ($10,000 prize) Craig and Patty Kidwell, Boys of BBQ & Patty, Odessa, MOReserve Grand Champion ($3,000 prize) Fred Horstman, 4 Mile Smokin Crew, Pleasant Hill, IAReserve Champion ($2,500 prize) Johnny Trigg, Smokin’ Triggers, Alvaredo, Texas4th Place ($2,000 prize) Donna McClure, PDT, Lenexa, Kansas5th Place ($1,500 prize) Robert Magee, Munchin’ Hogs at the Hilton, Kansas City, MO

Here’s a manageable size with all the same great ingredients as the big one. The original was made of Italian sausage, which is always 100% pork.

Prepare the cooker indirect at 300.

Form the sausage into a big patty. You’ll need to make it bigger than the bread to account for a little shrinkage. It’s ok if it’s thick. Form the burger as tightly as you can. Transfer it to the cooker. You’ll need to flip it one time and might need to rotate it so it cooks evenly. Cook the burger to an internal temp of 160. This should take about two hours.

Split the loaf of bread and if it’s too high just cut a slab out of the middle. Place the bottom bun on a plate. Top with the lettuce leaves. Nowmove the burger on top of the lettuce. Brush lightly with barbecue sauce. Add a shake or two of hot sauce and brush again. Top with cheese, bacon,peppers, onion and tomato.

Add the top bun and cut into 8 wedges to serve.

Yield: 8 servings
Heat Scale: Varies according to the amount of hot sauce

Instead of regular old paprika, my pork rub is made with Pimenton de la Vera, a smoked Spanish variety of chile that has earned a Denominacion de Origen, or controlled name status. (In order to be authentic, Pimenton de la Vera must be marked with that phrase, or simply its abbreviation: D.O.) If you want a spicier rub you can also add a little bit of ground chipotle chile powder

Mix all of the ingredients together in a large bowl. Add the meat to the bowl and rub it all over with the spice mixture. Wrap the bowl with plastic wrap and refrigerate for 24 hours. (In Iowa I was only able to let the rubbed meat rest a few hours but the flavors still came through!)