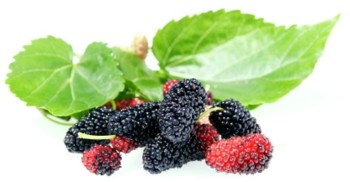 During the late spring and early summer there are certain specific destinations I go to on my long walks in the South Valley of Albuquerque: fruiting mulberry trees. I carry along a plastic bag and spend some quality time harvesting the ripe berries and staining my hands reddish-purple. But the stains are worth it–they wash off easily and the berries are used in surprisingly varied recipes, including both spicy ones and cool-down desserts. 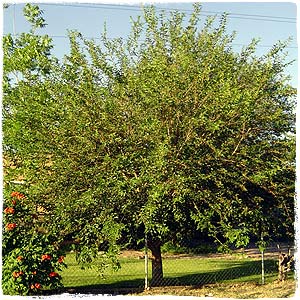 A young but fruitful mulberry tree

There are four main species of mulberries in the United States: red, black, white, and Texas. But there are so many hybrids among these species, plus cultivars, so except for the distinctive white mulberries with their pale berries, it is difficult to know precisely what species you are picking without consulting a botanist. In the eastern half of the country, the most common are the red mulberry (native) and the black mulberry, an import from southern Europe. The white mulberry is an import from China, where it has been cultivated for millennia as a food for silkworms, and there’s one a half-block from our house. The shorter, native Texas mulberry is mostly found in Texas, Arizona, and here in New Mexico. Depending on the species, mulberry trees can grow up to 80 feet tall but average less than that, usually between 30 and 50 feet. Because of their spreading nature, they are excellent shade trees. Except for the white mulberry, the berries mature to a dark purple color, nearly black.

Mulberries are dioecious, meaning that the flowering parts are on different trees–-males and females–-and the fruits and seeds are produced on the female plants. Chiles and tomatoes, for example, are monoecious, with all flowering parts on the same plant.

Because the female mulberry trees produce huge amounts of fruit that stain everything they touch, most people plant the male trees, the so-called fruitless mulberries that are grown from cuttings, or clones. I would estimate that 95 percent of the mulberry trees in the South Valley are males, which prevents the staining mess. The downside is the vast amount of pollen released by the males in the spring. There is a male mulberry outside of my office window and in the spring I can watch the yellow clouds of pollen being released, and that triggers fits of sneezing. 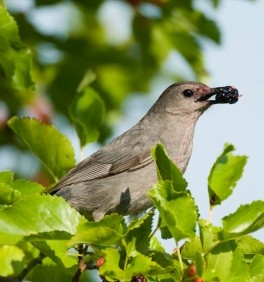 Botanically, the fruits of the mulberry are not berries, but rather a collective fruit. We’ll call them berries anyway because the look like berries. The dark, one-inch long berries have been eaten by mankind since before recorded history and are also consumed by birds, racoons, skunks, and squirrels. They were a delicacy at feasts in ancient Rome, and the Romans dedicated the tree to Minerva, goddess of wisdom. Ovid, in Metamorphoses, tells the story of the star-crossed lovers Pyramus and Thisbe, who killed themselves beneath a fruiting white mulberry. When the dying Thisbe prayed to the gods that the tree would “always have fruit of a dark and mournful hue, to make men remember the blood we two have shed,” the gods granted her wish and changed the white mulberry into the black mulberry, which stains the hands a reddish color. 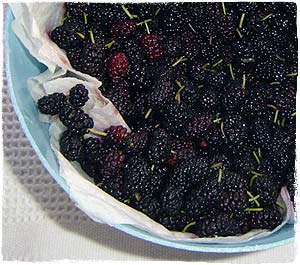 There are two principal methods of picking the berries: one by one by hand, or you can spread a large cloth like an old, clean sheet beneath the branches and vigorously shake them. I don’t advise climbing into the tree to pick them, although I did that as a kid. Rather, use a sturdy ladder to pick from the higher branches. Pick only the darkest and ripest berries as the lighter colored ones are very sour and not nearly as flavorful. Because birds will have been feeding on the berries, avoid picking those that have any white coloring on them. Be sure to soak them in water for an hour or so, and then rinse them clean. 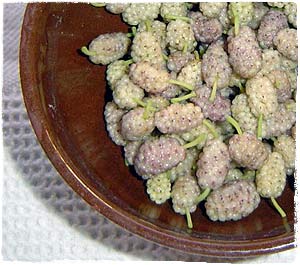 The berries will keep for several days in the refrigerator in a covered bowl, and they freeze well.

You can use mulberries in any recipe calling for blackberries or raspberries and they blend well with other fruits, especially apples and pears. Use them in pies, tarts, puddings, sorbets, ice cream, or in sauces. You can even make mulberry wine, but it takes a year until it’s a drinkable sweet wine similar to port. Recently, a commercial mulberry wine is being produced in Korea.

If you have mulberries, the following recipes will prove how versatile and delicious they are. If you don’t have them, my favorite substitute is frozen blackberries.

Spicy jams are all the rage today, with one of them winning the Grand Prize at the 2003 Scovie Awards. The recipe below is great on biscuits, toast and pancakes, and you can even use it as a glaze on grilled meats or as a topping for vanilla ice cream.

Crush the berries thoroughly in a bowl and then transfer to a saucepan.. Add the water and fruit pectin. Stir until the pectin is dissolved. Add the chile powder and stir. Heat to boiling. Boil 5 to 10 minutes. Add the sugar and stir until dissolved. Boil 3 to 5 minutes, stirring frequently, or until thick. Allow to cool, place in sterile jars, and refrigerate.

Thanks to Patrick Hancock, former executive chef at El Pinto Restaurant for the concept for the barbecue sauce recipe. For the chicken, I used The Old Spice Shack’s Country French Rub, and it was delicious. Note that the sauce can be pureed or not, and that it is the most brilliant purple color that you will ever see.

Place the chicken on a plate and sprinkle the rub over it. All to marinate for at least ½ hour, preferably longer.

In a sauce pan, combine the vinegar, garlic, mulberries, and chipotle and bring to a boil. Reduce the heat and cook, uncovered, for 15 minutes. Remove from the heat and puree if you want a smoother sauce.

Grill the chicken over medium heat for about 12 minutes per side, turning often.

Serve the chicken covered with the sauce.

Here’s a spicy treat and a good way to use up excess mulberries. Any number of commercial rubs work well for the lamb chops, or you can simply use red chile powder or hot paprika for the rub.

Place the lamb chops on a plate and sprinkle with the rub. Press the rub into the meat and let stand for 1/2 hour.

Grill the lamb over a medium hot fire until done; medium rare approximately will take 5 to 6 minutes per side, depending on the heat of the fire and the distance the meat is from it. The internal temperature should be 150 degrees F.

Place the lamb on a plate and top with the salsa. 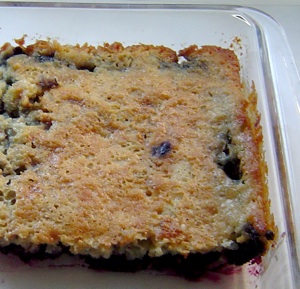 Any kind of fruit or berries works beautifully in this tasty, easy recipe. Out of season, we use frozen mulberries and the flavor and texture is identical to the fresh berries.

Preheat the oven to 350 degrees F. Place the berries in a bowl and stir in 1/4 to 1/2 cup of sugar into the fruit and set aside. Melt the butter in an 8-inch square glass baking dish. Sift the flour, sugar, baking powder, and salt together, and stir in the brown sugar; add the milk and lemon zest and mix.

Pour the batter into the dish of melted butter. Do not mix. Sprinkle the mulberries over the batter.

Thanks to Jeff Gerlach for this great basic ice cream recipe, to which we have added mulberries as the fruit of choice. 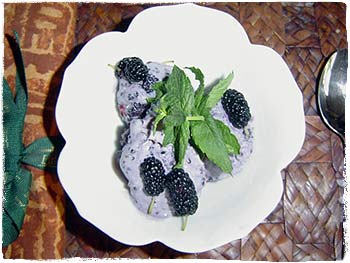 You will need an ice cream maker for this one, but the result is worth it. Note that mulberries are naturally sweet, so you may want to taste them to determine how much sugar to add, if any. This is a very forgiving recipe, so feel free to improvise. Warning: All of the tongues of the diners will be stained purple.

In a saucepan, heat the half and half, taking care not to boil. In a bowl, whisk together the whipping cream and the egg yolks. Slowly pour the heated half and half into the egg yolk mixture and whisk until smooth. Return this mixture to the saucepan, add the sugar, and cook over medium heat, stirring continuously until the mixture coats the back of a spoon, about 5 minutes. Remove from the heat and allow to cool for 30 minutes in the refrigerator.

Add the mulberry puree, mix well, and process in the ice cream maker according to the manufacturer’s instructions.

Here are other articles about cooking with sweet heat: