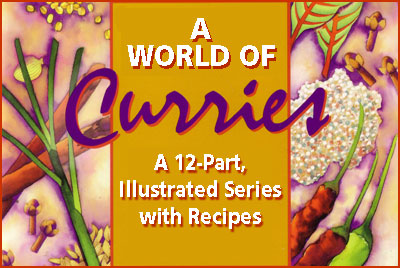 Although there is no definitive proof, I suspect that curries originated in southern India because the Malabar Coast of Kerala became the first spice-growing region of India.  Black pepper, cinnamon, turmeric, and cardamom first grew wild there, and then were cultivated for centuries before they spread into the other regions.

The Essentials of Southern Curries 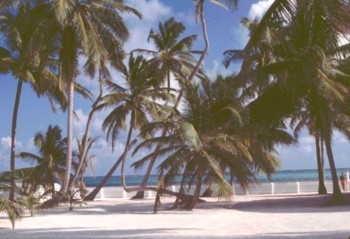 In addition to the numerous spices found in the curries of southern India, there is one enormously important ingredient: the coconut.  It is difficult to imagine a social function in many southern Indian states where coconuts are not present.  At wedding ceremonies and the breaking of ground at construction sites, a coconut is broken.  According to tradition, the act is a powerful but bloodless sacrifice to invoke the blessings of the gods.  In thousands of temples across southern India, priests break a coconut before an idol of their gods, and distribute the meat to devotees as a sort of communion.

Traditionalists believe that the meat and water of the coconut represent the Hindu trinity of Bramha, Vishnu, and Shiva.  However revered the coconut is in Hindu society, it is also and integral part of Muslim, Christian, Jewish, Buddhist, and Jain cuisines as well.  The milk and coconut meat transform hundreds of ordinary fish, meat, and vegetable dishes into memorable treats.  Although canned coconut milk is now available in Asian markets, I suggest that cooks prepare their own by following the suggestions and recipe here. 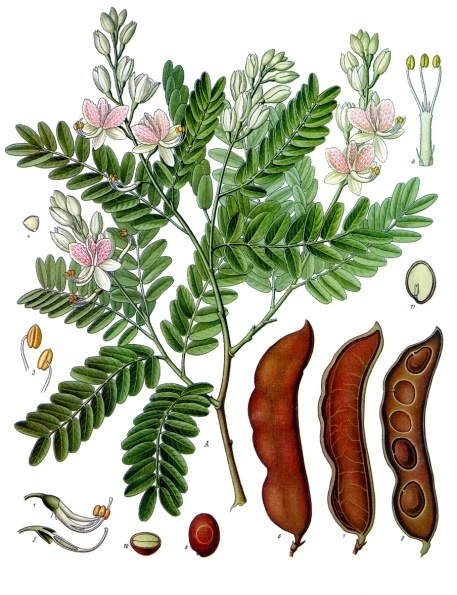 Another essential ingredient in the curries of southern India is tamarind, the tangy, sun-dried pods that often are sold in the form of a dried cake.  Tamarind is also available in markets as paste, jars of concentrated pulp, syrup, and even powders.

The food of southern India is unknown to most non-Indians who visit Indian restaurants outside India.  Most of these restaurants serve what is known as Moghlai and Punjabi foods from India’s north and northwestern regions.  The bias for this northern food is due largely to the fact that most of the early restaurant owners in the U.K. and U.S. were from these regions, and their success was widely copied.

Even in India, northerners have a limited idea of the incredible variety of delicacies found in the south.  Most northerners (and non-Indians too) believe that all southerners are vegetarians.  Many “experts” make statements like: “Over eighty percent of the population of India are vegetarians; and the southern half of India is almost exclusively so.”  Such observations are simply not true and have been fueled by articles in newspapers and magazines that perpetuate this myth, spread (perhaps unwittingly) by people from the two Indian states that are predominantly vegetarian.  In Gujarat, in India’s northwest, and in its neighboring state Rajasthan, at least seventy-five percent of the people are vegetarians because of the lingering influence of the Jain religion; with the rest of the India, the reverse proportion is true.  The myth about Indian’s food habits owes a lot to the Gujaratis, the largest group of Indian immigrants in North America and Britain.

According to the Hindu religion, which includes eighty percent of India’s billion-plus people, only beef is expressly forbidden because the cow (go-mata) is a sacred animal.  Other meat is perfectly permissible. Hinduism also forbids Brahmins from eating meat and fish, but Brahmins constitute only a tiny fraction of India’s population.  So, contrary to popular belief, South Indians excel in preparing hundreds of meat and fish dishes.

Of course, millions of Indians are vegetarians.  Vegetarian establishments serving southern fare are called udupi restaurants because Udupi is a temple town that trained its temple cooks to prepare vegetarian food in mass quantities to be given away at festivals.  Another southern state with a considerable consumption of meat and fish is Kerala.  More than half the population of that state is Muslim and Christian, and they are voracious beef eaters, so naturally some of the best curries from that state are made with beef.

It is a common misconception that because cows are sacred in India, no beef is served there.  Although cow slaughter is banned in most Indian states, Kerala and West Bengal–two states long ruled by communists elected through ballot–have refused to enact legislation banning beef.  Elsewhere in India, the meat of the water buffalo is substituted for beef.  It should be pointed out that across India cows are clandestinely slaughtered all the time and the minced beef, appearing in curries, is passed off as the more expensive lamb.  Pork is also popular in curries, especially in the state of Goa, the former Portuguese colony. 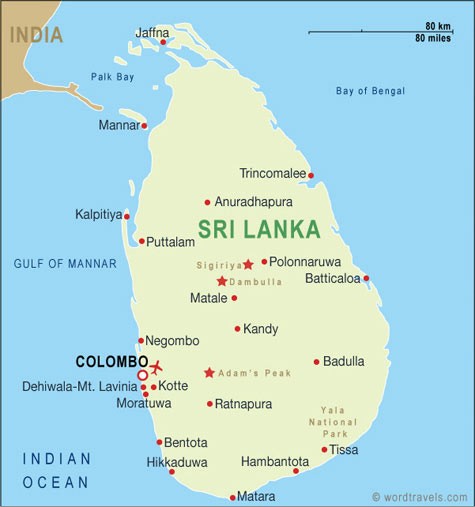 Sri Lanka, formerly known as Ceylon, the Isle of Gems, has a very rich culinary tradition that has been influenced by traders, immigrants, and conquerers from India, Arabia, Malaysia, Portugual, the Netherlands, and Britain.  Many people believe that Sri Lankan food is the same as southern Indian food, but there is one very large difference: the heat level.

According to Sri Lankan food importer Anura Saparamadu, no self-respecting Sri Lankan cook would ever buy Indian products because they are just too mild.  “Their curries are cumin and coriander based,” he says, “while our Sri Lankan curries are chile-based.”  Food writer Tina Kanagaratnam, who grew up in Sri Lanka, agrees: “Hotter and more robustly flavored than Indian curries, the curries of Sri Lanka get their distinctive flavor from the roasting of whole spices until they are dark brown before grinding–and from extra chiles.”

Sri Lanka’s reputation for extremely hot curries rests with its red, white, and black curries. The color of the red curry is derived, not surprisingly, from a huge amounts of red chile pods.  In one recipe for a Sri Lankan curry powder for fish and beef, Doreen Peiris, author of A Ceylon Cookery Book, calls for an entire pound of small dried red chiles!

White curries are considerably milder because the chiles are tempered with coconut meat and milk. Another unusual Sri Lankan recipe, Tamarind Chicken in White Curry Sauce, below, combines the tartness of tamarinds with the heat of chiles and the pungency of shallots, garlic, and spices.

But it is the black curries, featuring darkly roasted curry spices, which give, according to Sri Lankan cooks, better aroma and flavor.  Typically, a Sri Lankan black curry is made as follows: coriander, cumin, fennel, and fenugreek seeds are roasted separately, then combined with whole cinnamon, cloves, cardamom seeds, and leaves from the curry tree.  This mixture is then finely ground with mortar and pestle.  The finishing touch is the addition of no fewer than three types of chiles.  Medium-hot yellow Wax chiles are ground together with bush-ripened dried red chiles called valieche miris, plus the tiny but deadly hot “bird’s eye” chile, a relative of chiltepins.  The result is Black Lamb Curry, below. 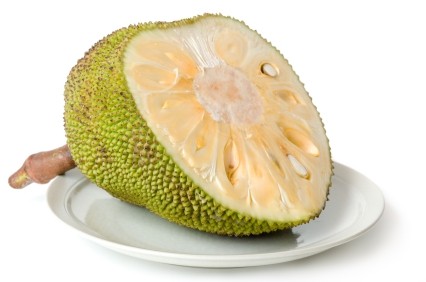 Fruits such as mangoes are commonly curried in Sri Lanka, in both unripe and ripe forms.  Another favorite fruit is jackfruit (at left), the largest fruit that grows on trees–it weighs as much as seventy pounds!  The unripe jackfruit meat is brined for about a month, then the salt is squeezed out and the jackfruit is fried in lard and red chile powder.  Jackfruit seeds, with a chestnut-like taste, are boiled and then curried.  Both the fruit and the seeds are available canned in Asian markets.

Sri Lankan food writer Tina Kanagaratnam has observed: “Sri Lankan curries are a rare treat.  Hardly ever found outside of home, the treasured recipes are passed down from mother to daughter, with no written record and certainly no measurement.”  Fortunately I have been able to track down some Sri Lankan curry recipes–complete with measurements. 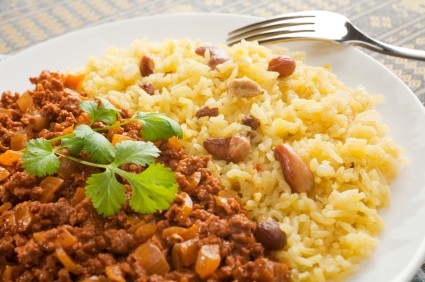 This is a popular dish from the coastal region of Karnataka using the basic Hurry Curry powder.  It is traditionally prepared with beef or lamb, but chicken may be substituted and the cooking time reduced by 7 minutes. Serve this with any of the rice recipes here.

In a skillet, heat the oil for 1 minute, add the ghee and the onion and cook over medium heat until the onions wilt, about 1 minute.  Add the garlic and ginger and fry the mixture for 1 minute. Add the bafat powder, lower the heat, and simmer for 1 minute.

Add the minced meat, mix well, and cook for 20 minutes over low heat. Sprinkle with cold water from time to time. Add the salt and stir. Garnish with the cilantro or mint leaves.
Yield: 4 servings
Heat Scale: Medium 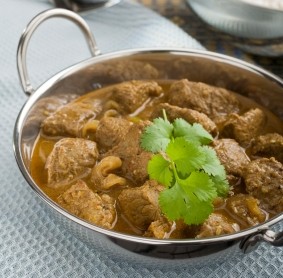 Sri Lanka is famous for its fiery cuisine, and this is one of the hottest of all Sri Lankan dishes.

Place the curry powder and the 1/2 cup water in a blender and puree to a smooth, thin paste.  Toss the lamb cubes in the mixture and marinate for an hour at room temperature.

In a pan, saute the chiles and the onion in the oil until soft.  Add the lamb and the marinade, and 2 cups of water.  Bring to a boil, reduce the heat, and simmer, covered, until the lamb is tender, about 1 hour, or until the lamb starts to fall apart.  Add more water if necessary.
Yield: 4 servings
Heat Scale: Hot 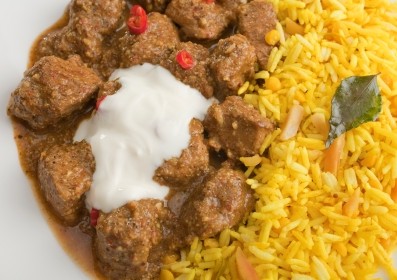 The tiny state of Goa on the west coast is known for its fiery pork dishes. This is one of the very few regions in India where pork is the most popular meat. One reason for this is that one-third of Goa is Christian, and Christians are the only people in India who do not have religious taboos about food.  Note: This recipe requires advance preparation.

Soak the chiles in 1/4 cup vinegar for 20 minutes.

Dry-roast the cumin, mustard, turmeric, black peppercorns, cinnamon, cardamom, clove powder, and nutmeg powder in a skillet for about a minute, and then place them into a food processor or blender with the onion, garlic, ginger, red chiles in vinegar, 1/8 cup oil, 3/4 cup vinegar, sugar, and salt, and puree to a smooth paste.

In a large bowl, combine the meat and the spice paste, and marinate overnight, covered. 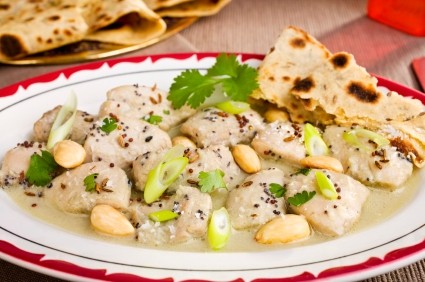 White curries with a coconut milk base are the mildest of the Sri Lankan curries–but still are hot by American tastes.

Soak the tamarind in 3/4 cup boiling water for 15 minutes. Mash the tamarind and then strain. Discard the pulp and reserve the juice.

In a large skillet, saute the chile rings, shallots, garlic, and ginger in the oil until soft.  Stir in the cayenne and chicken and mix well.

Add the coconut milk and bring to a boil.  Reduce the heat and simmer, covered, stirring occasionally, for 20 minutes.

Add the chopped chile and cook for an additional 5 minutes.  Stir in the tamarind and cook, uncovered, for 10 minutes or until the sauce is thickened, stirring occasionally.
Yield: 4 servings
Heat Scale: Hot 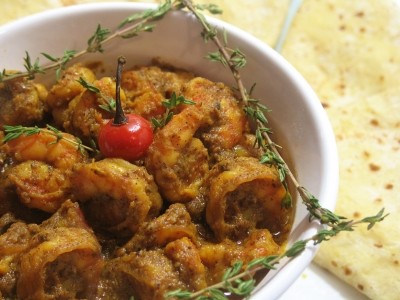 This is one of the popular dishes found along the southwest coast of India.  It is cooked only on special occasions because shrimp and crab are very expensive there.

Heat the oil in a large skillet for 2 minutes over medium heat. Add the onions and minced garlic and fry over low heat for 1 minute.

Add the bafat powder, stir well, and fry for 2 minutes. Add the tomatoes and coconut milk, and cook over medium heat for 8 minutes. 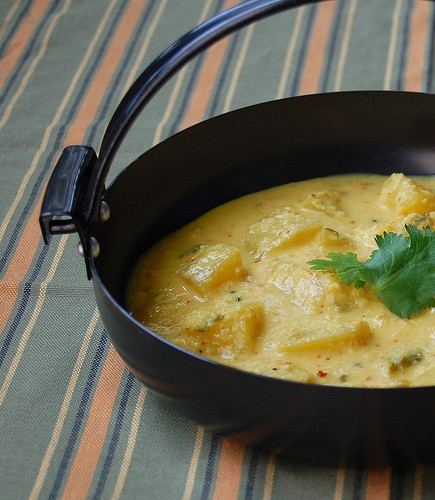 The coastal city of Mangalore is known for its hearty fish and meat dishes. The region is abundant in cashews and mangos, which are often curried.

In a food processor or blender, make a smooth paste of the garlic, ginger, peppercorns, coconut milk, and red and green chiles.  Set aside.

In a large skillet, heat the oil over medium heat for 2 minutes. Add the mustard seeds. When the seeds begin popping, lower the heat, add the ghee, and cook for 1 minute.  Add the paste, mango pulp, sugar, and turmeric.  Stir well and cook for 5 minutes. Add the salt just before serving and stir.
Yield: 4 servings
Heat Scale: Medium

A World of Curries: Making Curry Powders and Pastes

A World of Curries: Accompaniments to Curry Dishes

A World of Curries: Making Curry Powders and Pastes

A World of Curries: Accompaniments to Curry Dishes